If you ever walk downtown on a breezy morning, you might just get a whiff of coffee.  It’s even possible to be near McDonald’s and catch the sent of this Calder Way gem’s best product.

The Cheese Shoppe is a located at 234 Calder Way, just past Rotelli and underneath Looks Downtown. Many State College residents may be unaware of its even existence, but it has been in the same location for the past 37 years. Bill Clarke founded it on February 20th, 1976. It was the first store of its kind, focusing on cheeses from all around the world. When the store opened there were many doubts, the landlord didn’t even want to lease the property for fear of failure. However, Clarke was sure, he "had a gut feeling when he was driving into town."

Clarke was very confident in his plans to build his business in State College, but the need for cheese wasn’t as great as he hoped. On his long rides picking up cheese in New York, Clarke contemplated how to bring more customers into the store.  That’s when he decided to buy the equipment and start roasting coffee beans. He became the 6th in store roaster on the East Coast. That day was 25 years ago, 13 years after opening, and it changed the culture of The Cheese Shoppe forever.

Today the Cheese Shoppe has gourmet foods, chocolates, tea, cheese, and coffee. There are all types of coffee, from snicker doodle, to the newest brew, Flores Bajawa. There are many different countries and styles of roasts. Clarke tries to keep enough variety and consistency in the types of coffee but many of the regulars stick to a cup of Estate Java, the owner’s brew of choice. 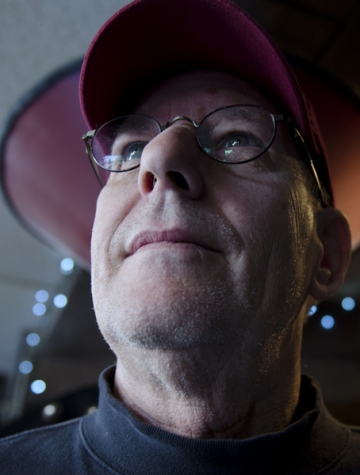 There are many different types of customers; republicans, democrats, hairdressers, doctors, five-year-olds, and Sue Paterno. But only a few can join the "vortex," as Clarke calls it. The regulars. There is the "Morning Crew," which consists of people like Jeff Wilson. The Crew became his family. This is the way it is among the Morning Crew. The Cheese Shoppe is their family; even the only student regular in before 8 am is apart of it. This is where they were welcomed with open arms and an "I love you" from Clarke. Just to be followed by a serenade, from Clarke, of a dirty made-up song. The Crew discusses the pains of the State College bubble they live in, with discussions focusing on cars, the Board of Trustees, and pretty girls in summer dresses.

The afternoon crew is just as dynamic, while on the younger end of the spectrum; they consider The Cheese Shoppe their home away from home. However, the topics differ greatly. Brett Michael, the evening manager, is a Walking Dead fan. One often walks into the Cheese Shoppe after 1 pm to find a heated debate over the likelihood of a zombie apocalypse. Michael is a red bearded thirty-something with a part-time gig at The Darkhorse, but has been working for Clarke since his graduation from Penn State. He is responsible for the Cheese Shoppe Girls. These are the employees the keep the store ticking all daylong. They do everything from grinding beans, making pots of coffee, espresso and more.

How can I help you?: The Cheese Shoppe Girls' dilemma

Unsure how to use the grinder? Can't decide on the difference between Sumantran and Bhrundi ? Don't know which cheese will be the perfect combination with that bottle of wine? The "Cheese Shoppe Girls" are there to help.

A health technician with a heart for animals

Molly Countermine: Rocking the classroom and the bars