Video posted December 8, 2014 in News by Video and Text by John Galiani


Each year, thousands of Penn State students take to the streets to raise money for children suffering from cancer by canning.  The money raised by standing on street corners and asking people to stuff donations into cans is an integral piece of the student run philanthropy known as THON.

This grassroots fundraising campaign is one of the most effective money making methods for the charity. The presence of students canning across the Northeast is also an important marketing tool for THON.

Although THON organizers emphasize selflessness and giving, behind the scenes the fundraising effort is becoming increasingly competitive as volunteers work to raise record amounts of donations. 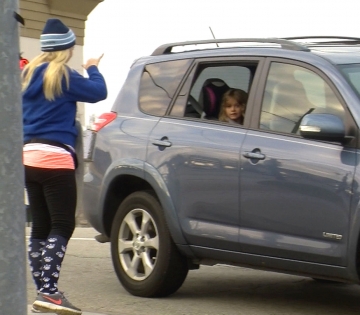 Maggie Stem is a first-year grad student from Pittsburgh who has been heavily involved with THON all five of her years at Penn State. She currently serves as the THON chair of her dance company, “Peace Love Lyrical.” (Warning music plays on site)  During her time as a student volunteer, Maggie has experienced THON by canning and by participating as a dancer in the 46 hour dance marathon that is the culmination of the months of fundraising.

Maggie says that the intense pressure on student organizations to constantly increase their fundraising totals from year to year has actually put a large strain on the students.
Incentives are offered to the organizations that raise the most money, and the natural competition between orgs to attain the highest totals is beginning to create rifts amongst the students involved, she says.

Canners are now going to the extremes, even waking up at the crack of dawn to reserve the best money-making intersections. Students feel pressure to can for as many as 10 hours a day.
Verbal confrontations have arisen between groups trying to claim the same canning spot, which may seem senseless to those unfamiliar with the cause considering all of the money ultimately goes to the same philanthropy.

Besides the negative image of fighting between volunteers, having thousands of students drive huge distances during the months of dicey winter weather is a potential liability for THON.  Rumors of phasing out canning have been circulating for years now and continue to gain credibility since the image of canning is not as pristine as it once was. THON is quickly being forced to question at what cost are those dollars being raised.

Canning Tips From a Pro

After years of canning at storefronts and intersections, Stem has learned a thing or two about persuading potential donors.

John Galiani has been a member of the ComRadio Sports Department since the first semester of his freshman year.  Aside from completing play-by-play assignments for the University as well as providing behind-the-scenes assistance, he also co-hosts a weekly sports-talk show, “TriState of Mind.”  John has always been extremely passionate about all sports and aspires to one day be a sports broadcaster in the New York area.