Ross Caruso is a 22-year-old from Grove City, Pa., and a senior at Penn State. He is majoring in Meteorology and Atmospheric Sciences. His ultimate goal is to be a weatherman on the morning news; a humble and unique major, for a humble and unique person.

Like every kid going through puberty he hoped to hit a growth spurt and shred his excess body fat. Unfortunately, that was not in the cards.

“I tried to get into sports when I was in seventh grade just to make friends, lose weight and stop being a human meatball, which actually was my nickname during baseball,” Caruso said.

During high school, the Grove City native played baseball and football. After breaking his leg during baseball season, he gained an additional 10 to 15 pounds and was beginning to think there was no light at the end of the tunnel.

In his sophomore year, he found a strength and conditioning coach to help get him in shape for football. Entering his junior year losing close to 75 pounds and gaining muscle mass, he was unrecognizable. Girls would talk to him and people would ask if he was the new kid in school.

“I was still the same person., same personality and everything; but now I was noticed, and I realized how much I like being different.” 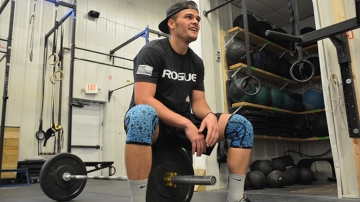 Caruso finishes his snatch progression workout and sits on the weights on the barbell to catch his breath before the timer goes off and he has to start another round. Photo by Lauren Ertl

After being accepted into Penn State he realized he needed to find something other than weightlifting to keep him physically fit; but it needed to be different. Back in Grove City, Caruso’s track coach talked to him about CrossFit, which bills itself as "the world’s fittest sport." He decided to do some research on CrossFit gyms, and found CrossFit Nittany. He went to his first free intro session and saw the intensity level and wasn’t sure if it was for him. Regardless, the next day he pushed his sore muscles out of bed and went to his second intro session. Through the blood and sweat, Caruso decided this was it.

The other members in his gym are older with families and established careers. Lawyers, doctors, accountants, mothers, fathers, and now a weatherman with a sense of humor and the ability to power snatch 215 pounds.

“Don’t judge a book by its cover. We’re all a big family and it’s incredible.," he said. "I couldn’t ask for anything more.”

Although Caurso enjoys CrossFit, studying meteorolgy was a new journey he started back in high school doing the morning weather announcements.

My ultimate career goal includes work as a producer and on-air talent in sports and entertainment.