Although living with six other, mostly foreign guys during his first semester at University Park was not John Kluepfel's initial plan, which he says is a result of filling out his housing contract last minute, there may not be anybody at Penn State who would be more prepared for it.

Kluepfel is a 22-year-old Japanese-American adoptee, but that is just scratching the surface of his story. The Penn State junior from Hoboken, New Jersey, is studying to become a sports broadcaster, which may not be expected by his peers when they pass him on campus.

“I kind of feel like people will look at me and just assume I’m Korean or Chinese and I don’t even speak English, so that doesn’t make me feel too good,” says Kluepfel, who in fact only speaks English, and admits to struggling in his required second language Spanish course.

A large part of the reason Kluepfel is so frequently misjudged, could be due to the people he is often seen with: his four roommates, three of whom are indeed international students from Asia.

Kluepfel lives in a supplemental room in McElwain Hall with Muyou Li, Yifei Xiao and Kang Dai, (although his friends call him Tom) who are all international students from China, and Gian Tolin, a Fillapino-American also from New Jersey.

There were originally seven men sharing the room at the beginning of the year but the other two either left Penn State or found a non-supplemental housing option. 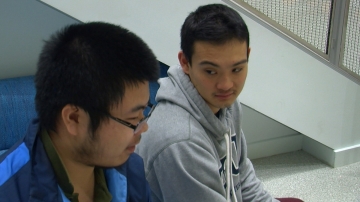 Growing up, Kluepfel would often not only share his home with his sister and parents, who adopted him at birth, but also foreign exchange students that his family would take in for a couple of months at a time to live with them. These students, often around the same age as John, have come from countries such as Germany, Brazil, France, China, Korea, Thailand, Macedonia, and Kazakhstan. Kluepfel said that he liked some of them more than others, but he greatly appreciates what he learned from each of them.

He said he especially enjoyed learning about a variety of cultures and says he wouldn’t trade his experience growing up for anything.

“I think now I can really appreciate what my parents did, just being cultured,” says Kluepfel. “It’s something that I have that I feel most people don’t.”

That “something” is certainly helpful when living with four guys who don’t speak much English and have a completely different background than him. However, Kluepfel says that his history with exchange students has helped prepare him for the language barriers and cultural differences. He said that he enjoys trying to “Americanize” his roommates by teaching them things such as slang and the rules of American football.

Athough Kang Dai is still working on his English coming from China, he said he is extremely grateful he was roomed with John to help him adjust to life in America.

Cody is a senior majoring in Broadcast Journalism and minoring in Business Liberal Arts. He hopes to enter the sports media industry, specifically play-by-play broadcasting on the radio. During his time at Penn State, Cody has done play-by-play for multiple sports and hosted several radio shows on Penn State’s student-run FM radio station, The LION 90.7 FM. Currently, he serves as the Sports Director at The LION, which requires him to manage all of the sports staff and generate the schedules. He also has served as the station’s Finance Director since the beginning of the 2014 school year. Cody has also interned for State College’s ESPN Radio 1450, where he called State High baseball games.