It’s about five in the morning when she puts down her paintbrush for the night. It’s the longer of many breaks for junior McKenzie Thorpe, a Schreyer Honors Scholar majoring in a Bachelor of Fine Arts, New Media. She’s been working on her final project for her painting class, a large oil painting in the series she calls “River Teeth Obituaries.” 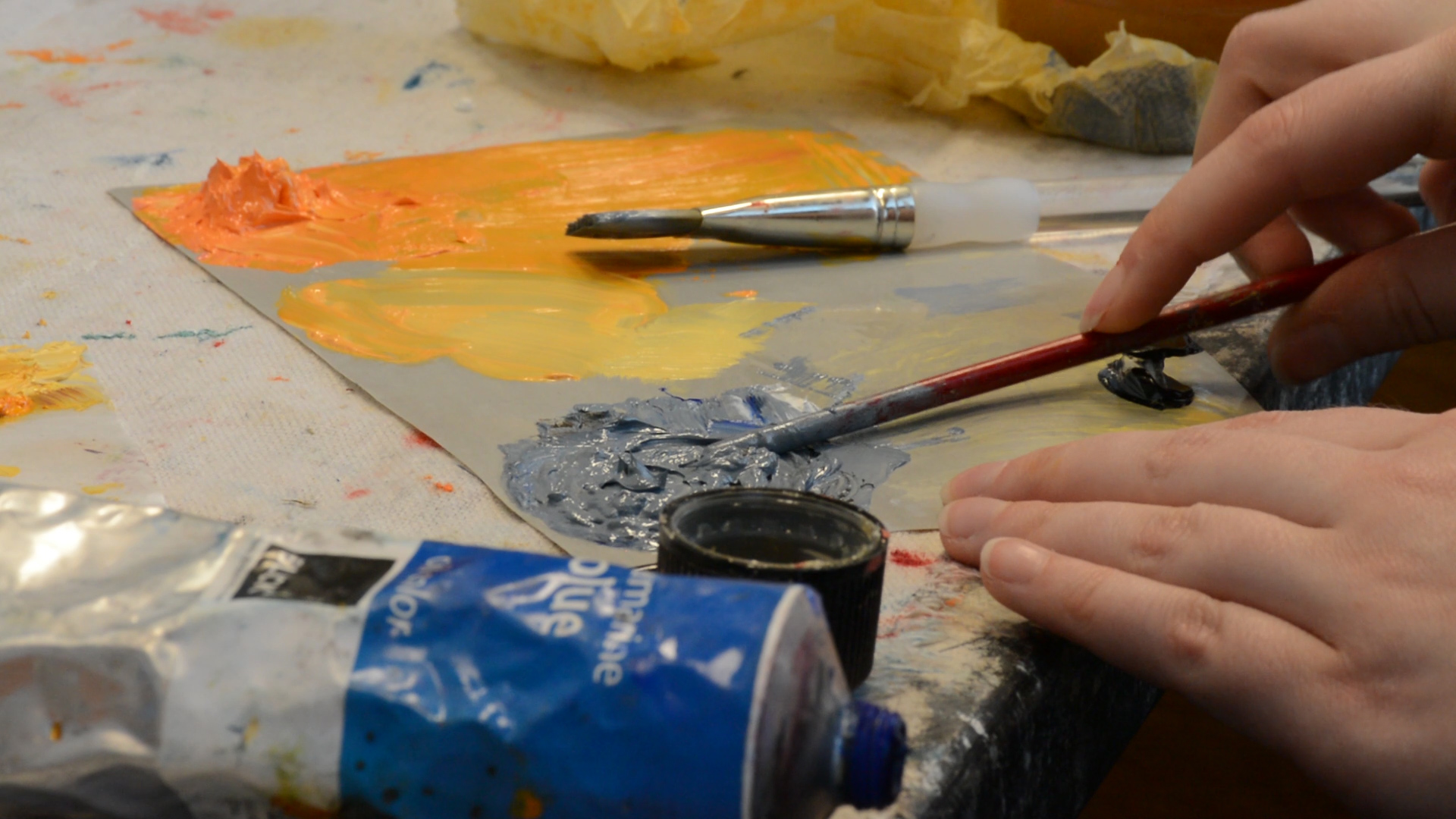 McKenzie Thorpe works late into the night on her final project, the fifth installment in her series "River Teeth Obituaries." Photo by Nikki Cheshire

The series highlights Thorpe’s experiences regarding instances of death she’s encountered in animals. “There’s just all these little stories, little tragedies, and I feel like I’m the only one who remembers them,” Thorpe says. “I think of it this way: Say you have a graph, and your x-axis and your y-axis go to 10. In the human mindset, a human death is up to level 10. It’s a big deal. Animal deaths are about a two; if it’s a pet, higher. But there’s a considerable difference when you look at this graph. Animal lives are considered less important than human lives. But if you make the x and y-axis a lot bigger – say you scale it up to 100, 1,000, a million, even – the farther away you get, the closer those things seem to be. So when you’re looking from far enough away, a human life is pretty much worth the same as an animal’s life, and are equally significant in the greater scheme of things.”

Along this theme, the series also addresses certain anxieties of Thorpe’s regarding mortality, the future, and what a person can do to be remembered. 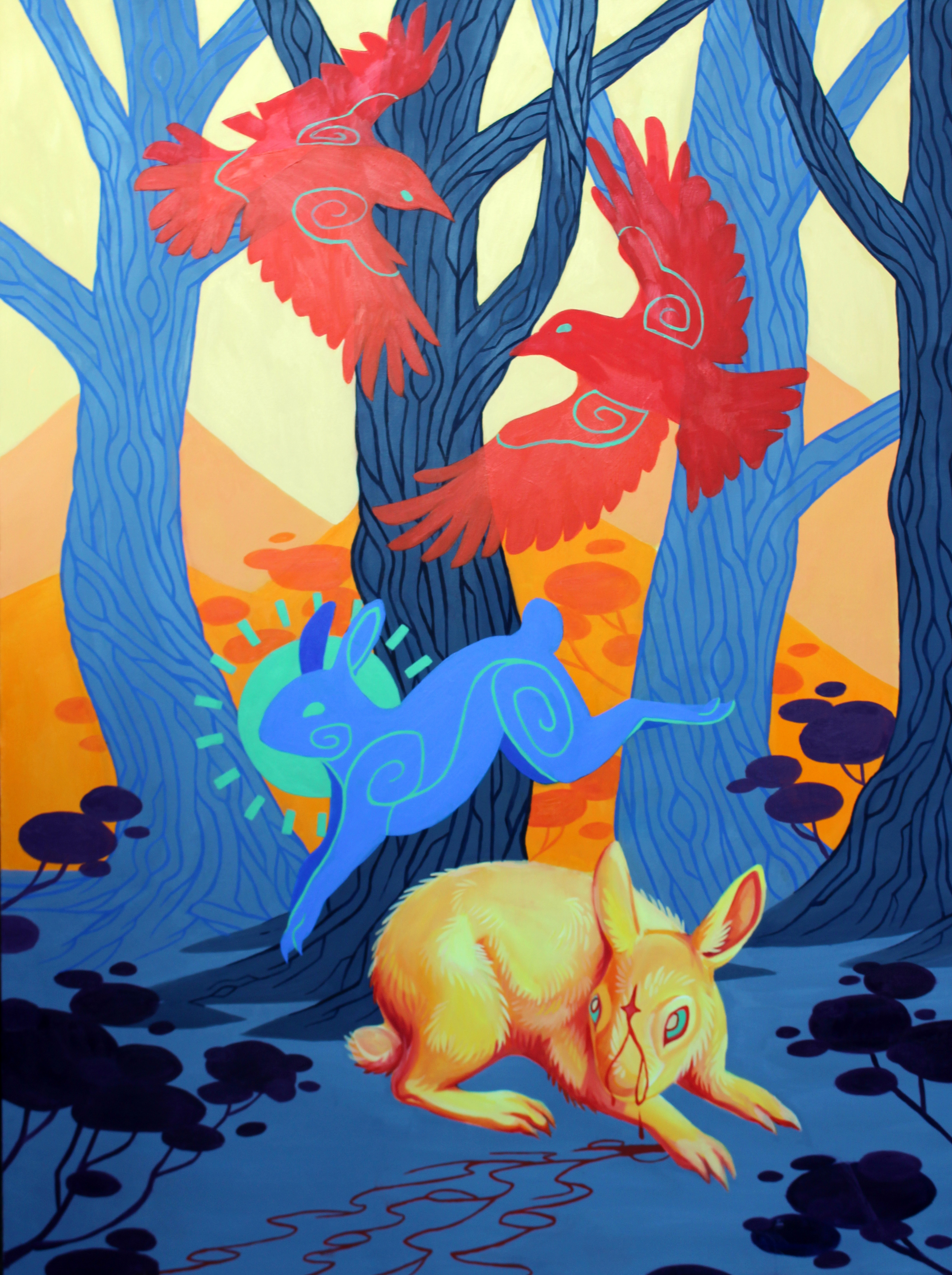 Thorpe's latest piece in the series. She posts her work on her personal website, which can be accessed by clicking here.

“They say you never really die until the last time your name is spoken,” she explains. “So I’m trying to make these memories, these instances, mean something more, and also in doing so kind of selfishly trying to attain a sort of extended life.” She continues, saying that if her work lasts even a few years after her life, then maybe it’ll have meant something more in the grand scheme of things.

As a person who lives with anxiety, expressing her emotions through art is one of the ways Thorpe balances herself. Though sometimes, the nature of the work is a source of stress in itself.

Her paintings require precise and delicate work, and can take several hours to dry in between layers. Thorpe often works for long periods at a time, pulling multiple “most-of-the-nighters,” only to finish for the night without seeing much of a difference from when she started earlier that day.

During the drying breaks, she works on digital art projects for her other classes – an independent study, a graphic novel class, and endlessly building a portfolio for when she graduates.

“These paintings that I’m doing for some reason felt more appropriate to do as paintings rather than digital pieces,” Thorpe says, though she doesn’t know exactly why that is. “It’s much more hands-on, it’s not easy to fix a mistake when you make it so you have to be much more deliberate. It makes it feel more meaningful, somehow. To have a heavy physical thing you can hold just has a weight to it that digital art doesn’t.”

Thorpe says though she prefers this medium for this particular subject, she feels her digital art is still equally as important.

“I feel just as strongly about the digital art that I do. A lot of it is silly or fantastical. It’s just imagination at work," she says. "But art doesn’t always have to be about death and sex, about heavy meaningful things. It doesn’t always have to make you think. Sometimes I think it should just be fun. And with digital art, I feel more free to do art just to do it.”

Despite everything however, she presses on. With the help of some fantastic mellow music playlists and the emptiness of the open studio at nighttime, Thorpe continues to excel in what she loves with the quiet hope that everything will turn out okay.

Video: The story behind the rabbit in the painting

Thorpe discusses an instance from her childhood that she felt the need to memorialize.

I’m interested in doing on-camera anchoring and reporting. I also have an interest in documentary work.