The Life of a Penn State Puppy Raiser


Sammi Bright, 22, is having a unique college experience. The fifth year senior is one of six people on Penn State’s University Park campus to raise a service dog while being a full-time student.

Bright came to Penn State majoring in animal science in hopes of working with animals for a career. When she joined the Small and Exotics Animal Club on campus she was introduced to the Campus Puppy Raising Program. Bright loved the idea of raising a service animal. Soon after finding out about the program she applied to be a Penn State puppy raiser. 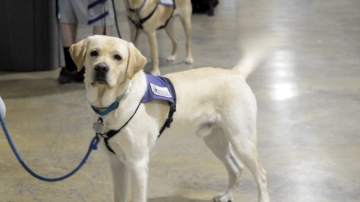 The Campus Puppy Raising Program is an opportunity made through non-profit organization Susquehanna Service Dogs. SSD provides the puppies to the school, where the student raises their own puppy for 15-18 months. The student is responsible for teaching the puppy basic house manners, skills, and specific tasks asked by the trainers. Raising a service dog on a college campus allows the puppies to be raised in a highly socialized environment while learning the skills they need to be successful working service dogs.

When Bright was accepted as a puppy raiser she was given SSD Barracuda, a yellow Labrador Retriever. Barracuda has a very mellow personality, and one of his favorite things to do is watch fireworks. One of Bright’s favorite memory with him is 4thof July when Barracuda pulled Bright outside, so he could sit and watch the fireworks.

"His head would move with the fireworks I was so suprised, but it was so cute," Bright said.

He also has really good genes, so SSD will actually use him to breed future service dogs before he gets partnered with a person in need. Bright says Barracuda is tall, so he will most likely be a standing support dog.

Bright got Barracuda when he was just four months old. She was a senior, so it was a huge adjustment in her day-to-day tasks. Bright was happy she got him as a senior since she already had her classes and social life figured out, so it was an easy adjustment.

For the first few months Bright had to dedicate a lot of time to the brand new puppy. The first two weeks were tiring nights as she had to get up numerous times in the night to let Barracuda out to go to the bathroom and make sure he was comfortable in his crate.

When the puppies are that little they are not allowed to go to classes yet, so Bright dedicated all her free time to going home and being with the puppy.

Although a college campus is a great place for dogs to learn manners and self-control in a busy environment, Bright says it gets very tough to have a dog on campus. Even when Barracuda is wearing his service vest, that does not stop many students from attempting to pet him or get his attention. Bright will allow students to pet Barracuda when he is working as long as he is staying focused on her.

Barracuda is now 15 months old and will soon leave Bright to go to advance service dog training. Bright says it will be a hard goodbye, but she reminds herself that he is going to help someone in need. Luckily all puppy raisers get to meet the person that will get the service dog and will stay in contact with them to get updates on how the dog is doing.

Bright plans on raising a brand new puppy once she has to say goodbye to Barracuda. She says she had such a great experience raising Barracuda that she is now looking at becoming an animal trainer once she graduates.


Barracuda is known for his calm personality and relaxed presence. So when Bright brought him to Whipple Dam, Pennsylvania to enjoy the lake for the very first time she was in for a surprise.

I hope to pursue a career in the entertainment industry. I would like to work primarily in the music industry as a events manager or agent of some kind. I also have a strong interest in television working as a production assistant.