If you have his class, you'll remember his beard.  If you bumped into him in the hall, you'd remember him as the man with the beard.

Chris Johnstone started growing a beard as a graduate student at The University of Wisconsin in 1970.  Ever since his "Walrus Mustache," he has always had some variation of a full beard, even when it was "trimmed" or "shaped."  Johnstone, who now lives in a house in the woods 6 miles outside of State College, where he is the Communication Arts and Sciences professor at Penn State University, says he grew his beard to showcase his inner-woodsman. 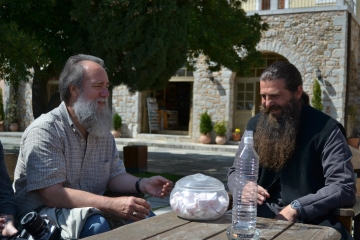 Johnstone is retiring from teaching at the end of this semester, and although he doesn't plan on any drastic symbolic changes to his facial hair, he jokes that he has always thought about shaving his face clean and robbing a bank and then letting it all grow back.  Even if they caught him on tape, Johnstone says, they'd never find him because his beard is that recognizable.

Patty, Johnstone's wife, says she's never had a problem with his beard and likes that it allows them to be remembered by the people they've met throughout their life travels.  In Greece, both Patty and Chris say people compare him to high priests, and in Middle Eastern countries, they say he is mistaken for Ali Baba.  In the United States, Chris says kids will point and say "Santa!"  Chris says he pays homage to the greatest beards in history and that his is a mere glimpse of the greatest beards that have faced this earth.

"It gives people something to talk about," says Johnstone.  Although people often ask him about it, Johnstone says no one has asked to touch it -- yet. 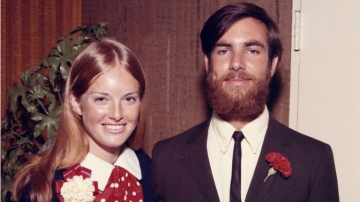 Patty and Chris met in their sophomore year of college in 1967 at University of California Davis.  At the time, Chris only had a mustache.  Patty says he was cute and compares the social perception of facial hair at the turn of the decade to what today's college students would describe as "hot."

The youth of the 1960's and 70's were rebelling against the clean-cut look that their parents had before them, Patty says. It became a part of Chris' identity and remains that way today.


Patty knew if she was going to have a relationship with Chris, his beard and his dress was his business.  As long as he keeps it clean and doesn't do anything abnormal with it, like dye it or braid it, she is fine with it.  But, she says, she wouldn't hate it if it was a few inches shorter.