Off a cobblestone road five minutes from campus you can find the Penn State Woodsmen vigorously chopping and sawing in preparation for an upcoming competition. The coed team practices a variety of lumberjack skills three times a week.

“Some of the things we do at Woodmen’s is underhand chop and vertical chop, blot spit, buck saw and bow saw and axe throwing. There is also pole climbing, team events and water boil,”  Kelly Hower said.

Hower is one of the incoming captains for the 2014-2015 Woodsmen season. She will be competing in the crosscut-to-death event, axe throwing and other team events.

The small club gets little funding from the university, so they raise the money to pay for registration and transportation  by selling firewood. The Woodsmen sell, cut and gather the wood, which they then deliver to local community members. The Penn State Woodsmen are the self-titled “Lumberjacks and Jills”  on campus.

While most of the team members are agricultural related majors, there are a couple engineers and psychology majors on the team. Anyone is free to join. They just have to be willing to throw an axe over their head and in between their feet. 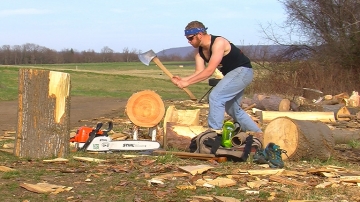 “It’s traditional forestry activities so that is the root of it,” said one of this year's captains. “But we're open to everybody. We’ve had just about every type of major and every type of person and its just a lot of fun.”

While they all make is look easy it is not the safest sport to get involved in, and injuries do happen. Wentzel knows this first hand after he injured his thumb with a chainsaw, “but like a true lumberjack I put some gauze on it taped it back up and went back to it.”

No matter how many years you have been competing mistakes can still be made, or repeated.

Two years in a row Kelly Hower says she saw a competitor lose part of his finger during the water boil event. The competitor not only finished the event, he went on to win.

This year’s Woodsmen captain Adam Wentzel saw a fellow competitor chop all five toes off during an axe event. All of the toes were found and are now safely back on his foot.

Jaime Pritzker is from Bryn Mawr Pa. She is majoring in broadcast journalism, with minors in both business and international studies. At Penn State, Jaime is a production assistant and audio producer for B94.5 Morning Zoo radio station. She is also a member of Delta Gamma Fraternity. Upon graduation in May, Jaime wants to pursue a career in television production.