Tommy Wareham grew up in State College surrounded by music.

He says his father was a great pianist who taught music appreciation at Penn State. Wareham says that when he chose which instrument he wanted to play as a ten year old, it was guitar not piano. By the time he reached high school, he was playing piano, too. 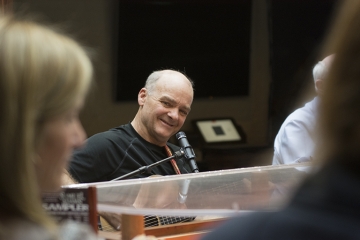 Wareham says he began performing in bars as a guitarist, but was encouraged to switch to piano. Now he says he finds playing piano is actually fun.

Wareham started playing piano at the American Ale House when it opened 15 years ago. The piano bar there has a built in counter and seating for guests.  Wareham says he performs there every Friday and Saturday.

Most of people who sit at the piano bar are regulars and come to see him every weekend, Wareham says. Many have become his friends.

There are bongos, tambourines and maracas stored below the piano bar. Wareham says they’re not there for him. The instruments are for anyone who wants to join in and play. He says regulars often join his show, playing the instruments, singing with him and dancing, too.

Wareham says he likes to go on the road. He performs across Pennsylvania and in neighboring states. He says he’s not traveling to escape. He says he’s trying to find new experiences so he can provide fresh music to his fans.


Wareham he says that in most bars the audience and performer sit away from each other. However, at Tommy’s Piano Bar in the American Ale House people can sit around him, talk to him and sometimes join in the performance.

I want to go into sport photo journalism area as my future career.

Fracking: Cause for Concern?