Video posted May 6, 2015 in News by Jonathan Warner

Favilla has loved the concept of music every since he was just a little boy, his parent had no real musical influence on him until his parents got him a keyboard at a very young age, Since than, all he wanted to do was study the fine art of piano playing and become one the best pianist that has ever done it. 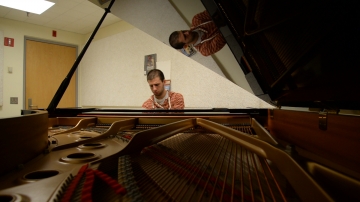 He began taking lessons once his parents realized the sheer joy Favilla had while he was playing and he soon began to soar as an amazing piano player once he began to start practicing every single day and taking it seriously. Favilla piano teacher from high school, Mr. Zork, thought he was so good, that he decided to help him get into Penn State, and his musical career had begun.

Being apart of the Penn state orchestra is like being apart of an athletic sports team, you are busy most of your day. Favilla plays the piano for up to 5 hours every single day, not only does practice make perfect, but being perfect when it comes to hitting a note a certain way is very crucial in competition and competing in against other schools. Balancing learning new music every single week and taking classes in sense is like being a collegiate athlete, only he gets recognized by a much small group of people unlike the football team.

The art of music to Favilla means just as much to him as learning the history of football is to some players, taking time and energy to learn all about it means everything to him. From Beethoven, Bach, and Mozart, Favilla has studied and has even hand some of all three of these pioneering artistes work memorized by heart. He has taken into accountant that not he may not be as good as Beethoven, as of yet, but he inspires to one day make and compose music into his own beautiful art form that he one day can share with to the rest of the world.

In the future Favilla hopes to start exploring the world and teaching music to future inspiring musicians like himself.  More importantly, he plans on becoming somewhat of a mentor to an inspiring student just like how his high school teacher was to him. Favilla has high hopes for his future ahead of him, one day, he plans on all of us seeing his name performing on the highest stage of music.

Video: The Sport of Piano Playing

Favilla takes into the fact that playing the piano for the Penn State orchestra is like being a student athelete, pratice makes perfect. Just like how athletes need to train to perform well in front of an audience, Favilla must do the same thing and make sure his craft is up to par.

My goal is a career covering national and international broadcast news.