At University Park Gary Cattell, is known as “The Willard Preacher”, who preaches the Gospel at Pennsylvania State University in front of Willard Hall.  Some people harshly criticizes Cattell. Students have gone as far as to protest against him.  Many students say they believe believe that his technique and approach to enlightening people may comes across as harsh and unwanted. Others may disagree.

People who do not know The Willard Preacher categorize him as what seems to be a religious radical who forces his opinion on others.To many he is intimidating and unapproachable. All people can really infer about him is what they may see outside of Willard. There have been rumors that he is homeless, that he is insane, that he has no job, and that he has no family.

The Willard Preacher actually conducts a very normal life. Cattell lives in a nice home in Port Matilda with his wife Karen Cattel. She is a spunky, sweet, and up beat woman who substitute teaches at local schools. Karen and Gary share four children together who have all grown up to be successful adults. Their oldest son is in the Air Force, their oldest daughter studies in England, their youngest daughter works in Harrisburg, and their youngest son is enrolled at the University of Kentucky, where he competes on the varsity swim team. The Cattell’s have grandchildren as well. 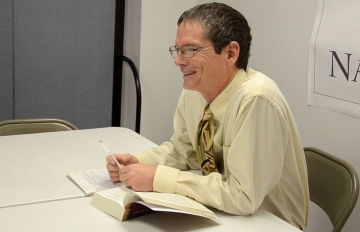 Gary Cattell fellowships and teaches Sunday school at Holy Trinity Orthodox Church  located near Sparks Street and West College Ave. Church members describe him as the most humble man that they know, a gentle soul who truly cares about the well-being of others around him. He is also described as a man of few words. He is quite and laid back. There is nothing harsh or intimidating about him. He is a man who truly believes in his preaching and would like to change the world and make it a better place.

Cattell has inspired others to go out and preach the gospel as well. His firm belief in his religion has ignited fires within other people’s spirits to join his church. He is described as a life saver. Does he ever gets discouraged by the flack that he has to take from those who oppose his mission and what he is trying to accomplish? “ Of course everybody is affected by what people think about them, but do I judge them for it? No. Do I let it stop me from going back out there every day? No I won’t.”,he said.

Demitiri Vaughn met Gary Cattell five years ago when he walked passed Willard and noticed a man preaching to students outside. He stopped and listened, becoming intrigued by his words and ideals. At first he tried to dispute them, but he soon realized that it was hard to argue with him because of the valid points he made. When Demitri met The Willard preacher he had only previously believed in god and only god. Cattell gave him the inspiration to convert to Orthodox Christianianity and join the Holy Trinity Orthodox Church. Demitri even began street preaching himself in hopes to inspire and englighten people the way Cattell inspired him.

My name is Monique Robinson and I am a Philadelphia native. I am also a graduating senior who is interested in becoming an on-camera reporter in entertainment news.

The passion of dance