The Woman Behind the Blog

Elissa Hill wants Onward State to be different than other campus media.

In fact, that is her job. She is the Managing Editor of Onward State. 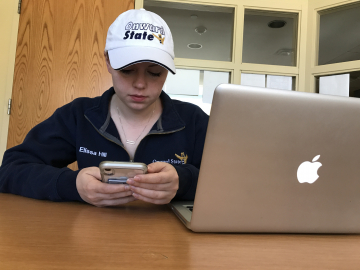 Onward State is a student-run blog that operates under the umbrella of StateCollege.com. Onward State is a website that seeks “to foster the student voice through the combination of commentary that is fair, authentic, and sometimes humorous; analysis that is critical and irreverent; and news that is relevant and accurate.”

The website was founded in 2008. For the past two years, Elissa Hill has served as the blog’s managing editor.

“I am actually only the fourth female editor of Onward State and the longest standing one,” she said.

As Managing Editor, Hill says she has sought to not only increase the visibility of the blog, but also to teach her staff to write and publish articles in a unique voice that other campus outlets do not offer:

“We continue to try to help other people how to learn kind of in their most authentic Onward State voice, rather than a bland journalism thing that you could read in any outlet,” Hill said.

The blog’s fourth leading female says that being a female often gives her an advantage in approachability that male predecessors may not have had.

As her tenure comes to a close, Hill has climbed the ranks within the leadership of the blog, starting out as a contributing writer and graduating as managing editor.

Hill intends to take the skills and lessons she has learned in these different capacities to the Public Relations world; she will begin working at Brian Communications in Philadelphia in June upon her graduation from Penn State.

On campus, Reagan has served in multiple capacities in the University Park Undergraduate Association and after terms as THON chair and Vice President, she currently serves as the President of the Penn State College Republicans. In the summer of 2017, Reagan served as an editorial intern at Townhall.com in Washington, D.C. Upon graduation, she hopes to return to our nation’s capital and work in a political reporting capacity.