The saying “those who can’t, teach” doesn’t apply to Robert Schneider. The Penn State theatre professor not only teaches but acts and directs.

Theatre has always been a part of Schneider’s life. Schneider was introduced to it at a young age by his parents. He grew up in New York and as a child Schneider’s parent used to take himto watch performances.

In time, Schneider became more interested in directing than acting. He volunteered to direct for the first time at age 17, when his high school’s theatre director was unable. Schneider realized that he enjoyed telling stories while being off stage. In the last 13 years he, has directed about 120 performances.

Like directing, Schneider stumbled into his love for teaching. Before graduating from Penn State with his master’s degree, the head of the department asked him to stay for a year and teach. That year turned into four more.

Schneider currently teaches The Art of Theatre, better known as Theatre 100. The course has over 600 students registered each semester and has made Schneider one of the most well-known professors at Penn State.

Schneider said he enjoys interacting with his students. 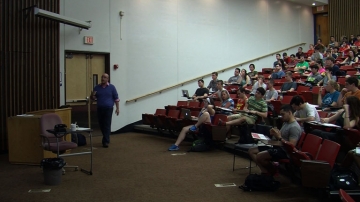 He thinks the course is popular  because there is a live performance that takes place every class. He also believes his class is popular because he’s managed to make a correlation between what’s learned in class and what the students are facing in their lives. Schneider said he hopes that when students leave his class they take advantage of opportunities to see live theater.

“I’m trying to ensure an audience for the future more than I’m doing anything else,” Schneider said.

One of Schneider’s favorite aspects of theatre is its immediacy. According to Schneider, theatre is the only art form where the director and actors can instantly see the reaction of the audience.

“I like the idea that a group of story tellers are gonna sit in a room full of strangers in the dark and tell a story and you’ll know immediately whether or not the story is being told clearly,” Schneider said.

This is the Penn State’s professor’s last semester.  He said he’s looking forward to returning to California. He hopes to continue his directing career, get into producing and opening up a school that prepares high school students for college musical theatre auditions. Schneider said he enjoys developing and fostering new talent.

Kasey Graham, one of Schneider's assistant, says the professor will be missed because of his knowledge about theatre. Kasey is also directing Schneider in a play.

During my college career, I have expanded my journalistic skills by interning at Centre County’s Government and Education Channel, being a member of Penn State Network Television and writing for the Daily Collegian, Penn State’s student run paper. I plan on pursing a career in broadcast television or multimedia.

On the road: A cyclist’s perspective