On Thanksgiving afternoon, Theoplus Clayton took a nap on a couch while watching football. When he woke up, he felt embarrassed, because “I fell asleep on someone else’s couch!” The couch belongs to a family that invited Clayton for the Thanksgiving feast. He is homeless.

“I’m actually living my dream due to someone else’s compassion.” Clayton said. “I don’t even think it was so much that they believed in me, but they saw I believed in me, and that is good enough for them.“ 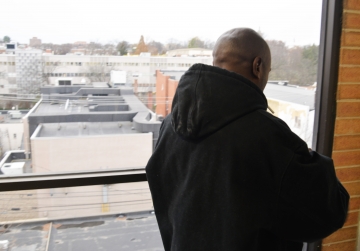 “All my life, I have sang,” Clayton said. He and his siblings performed in a gospel group at church. Unable to produce his CD, Clayton drowned his sorrows in alcohol. He went broke.

It has been about two months since Clayton showed up at the Hearts for the Homeless, a daytime homeless shelter in downtown State College.

“It’s a place that you can go if you’re trying to get back on your feet,” he said. He now calls the shelter his daytime “home.”

Ginny Poorman remembers being impressed by his sense of humor. "He laid down on the ground, and when people who were rude walked back by he just yelled, ‘Get out of my living room!’ Really loud."

Poorman is the director of Hearts for the Homeless. She oncw thought there weren't any homeless people in State College. Then she learned there were two, then 20. When she discovered the number was actually close to 50 she decided to found a shelter.

Clayton began to open up to her after she heard him singing. They became "cigarette together" friends. 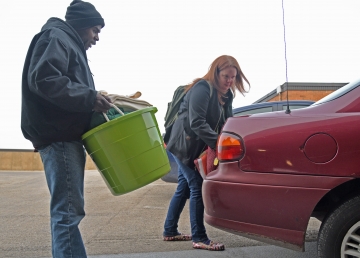 Thanks to his new found friends in State College, Clayton said, "I'm getting help from everywhere." He now has three recordings published on SoundCloud and has started making a music video. He just became the highest ranked musician in State College area on the Hip Hop chart of ReverbNation, an online promotion platform used by music industry.

Life is tough for anyone who is homeless and jobless. With a long past history of drug use, Clayton said he has struggled to get to where he is and has been clean from drugs for a whole year now. Whenever he feels depressed, he will still get a beer. He says he still can’t help yelling at people who make him feel offended. Sometimes, he even can’t avoid taking a pee at the back of a building on Atherton Street.

He always asks what he can do to help any person who is willing to give him a few spare dollars.

“I like where I am now,“ Clayton said, “I’m just going to keep the good and the bad, and go from here to do better."

One pay check away from homeless

Ginny Poorman is the founder and the director of the Hearts for the Homeless. She said that homelessness is not that far away from anyone's life, especially for college students.

Yang’s career goal is to be an active journalist covering international news and culture events.