Together, are we one?

Pradit Kulshreshtha came to Penn State a year ago from India to pursue his goal earning a master’s degree in structural engineering. 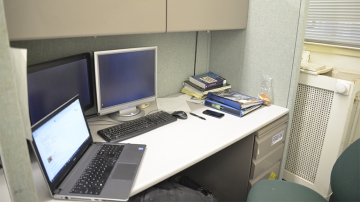 Being an international student, Kulshreshtha has experienced some cultural and language boundaries that have made communication hard for him. He says that through music, he wants to improve the quality of people’s lives; while through structural engineering, he wants to save people’s lives.

He says his mother has always been his inspiration in pursuing music, and he believes music is the best way to express his feelings.

“Over the years, my passion for music turned into my profession and I began performing at numerous locations across my country. It has been an absolutely amazing journey so far and I have received a lot of love and support from people. Although I have had my fair share of struggles and tough times just like in the life of any other artist, the important note throughout my life has been that I have never stopped believing in myself,” Kulshreshtha said. 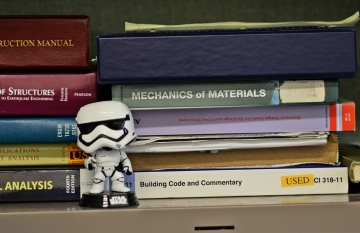 The book shelf at Kulshreshtha's office.

He says his mission is to encourage Penn State students to embody the ‘We Are’ Penn State motto. He says that in order to establish a strong student bond, people need to try to understand each other. In addition, he says it is important to be aware of the people surrounding us. If people are aware of others’ specialties, they can compliment each other’s strengths and weaknesses to build a strong community.

He says he collaborated with artists from many other cultures to create the song, ’Together We Are One.’ Kulshreshtha won the Ardeth & Norman Frisbey International Student Award for his song and invested the money back into the music project in the hope of unifying Penn State.

Kulshreshtha says that while most people see buildings as just inanimate objects, engineers see them as if they are alive. For example, a building can twist and turn when those actions are necessary. Furthermore, just like an exhausted human, buildings somehow convey their message of, “I can’t take anymore loads.”

Kulshreshtha thinks the value of structural engineering is not emphasized enough to the general public. With better structures, more people can survive during natural disasters, but the technology is very expensive. Kulshreshtha says he wants to create cheaper stronger buildings to save more people.

With both his engineering and music, he wants to create a positive difference at Penn State.

Listen to Together We Are One


Video: What does ‘Together we are one’ mean to you?

Keerti Prakash, Lee Juarez and Martin Nwodo are from different countries, but they have all embraced Pradit’s project.

I am interested in production. So, I am looking forward to finding an adequate position which I can excel as well as a position that would require learning as I move forward.