Dalton Wilson is a senior at Penn State studying agricultural systems management.  After graduation, Dalton hopes to either work for an equipment company testing products or work as a technician for a dealership.  When Wilson isn’t studying, he can sometimes be found at a Penn State dairy farm where he resides, and also works most mornings throughout the week.  When Wilson doesn’t have to study or work, he enjoys spending his time hunting, or traveling back to his hometown—Johnstown, Pennsylvania—to spend time with his family.  Wilson also keeps himself busy by being involved with various clubs and organizations on campus, including THON. 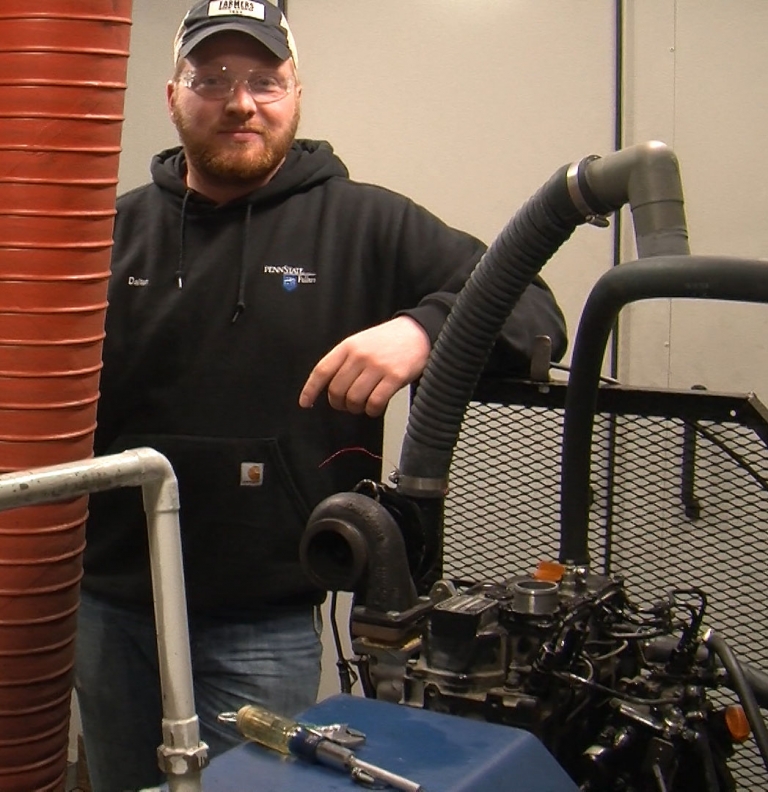 While many people around Centre County may be familiar with the student run dance marathon, they may not be so familiar with something else Wilson is involved with. Wilson is the captain of the quarter sized tractor pull club at Penn State.  The team is comprised of a group of about fifteen students who come from a wide range of majors, including engineering and agriculture—anyone can become a member of the team.  However, it is a commitment.  The team members must devote their time to meetings and workshops multiple times each week.

Each June, about 35-40 teams around the United States and Canada take their tractors to compete in Peoria, Illinois.  There are many events that take place during the competition, including two tractor pulleys (what tractor can pull cargo the farthest), presentation of the tractor, a cost analysis, and the safety and manufacture ability of the tractor.  The judges are engineers who work in the industry, such as John Deere.

Wilson said that the team came in 5th place last year, and they’re optimistic about improving their place this upcoming year.  While the building process and the competition are fun, Wilson enjoys the quality time spent with the members of the team the most.  He says that because they are with each other so much, close friendships are developed.

However, Wilson says it’s very difficult to keep people around.  The team has 15 members, but only about eight members are consistently involved throughout the year.  It is a very slow process, so it is very difficult to keep the members motivated, especially during the fall semester.  However, Wilson says that if people remain involved, it is a very rewarding experience.

I would like to be a news anchor in the broadcast industry, or a sports sideline reporter.