Here in this city that has turned red, white and blue for the Democratic National Convention, the sisters – one from Bellefonte, Pennsylvania, and the other from Seattle, Washington, walk the same, talk the same and display a rather reserved demeanor in comparison to many of the other Democratic delegates and guests at the Pennsylvania delegation breakfast at the DoubleTree hotel.

Really, it’s their dueling buttons that reveal the only noticeable difference between the 62-year-old twins. Joanne’s button flashed “Bernie Sanders” written over a rainbow-colored background, while Linda’s offered her support to Hillary Clinton. 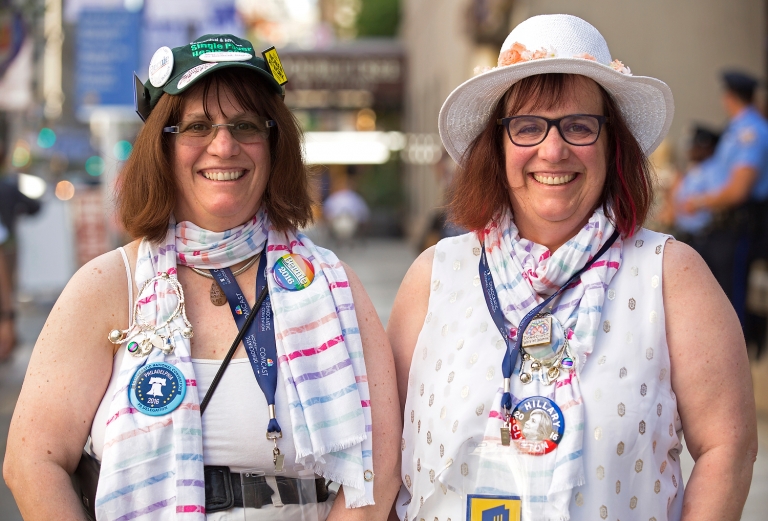 Joanne Tosti-Vasey, from Bellefonte, PA, left, and her twin sister Linda Tosti-Lane, from Seattle, Washington, pose for a portrait in front of the Doubletree Hilton hotel after the Pennsylvania delegation breakfast in Philadelphia on Tuesday, July 26, 2016. Both sisters traveled to Philadelphia for the Democratic National Convention where Tosti-Vasey is a Bernie Sanders delegate and brought her sister, a Hillary Clinton supporter, who missed being a delegate as well by one vote. (Photo by Antonella Crescimbeni)

Linda, who said she missed being named a Washington state delegate by one vote, traveled across the country to attend the convention and joined her sister as a guest at Tuesday’s Pennsylvania breakfast.

Linda said Joanne’s unwavering stance on health care was the only reason for their differing presidential candidate preferences.

Joanne’s support for a single-payer system dates back 27 years to when she was diagnosed with leukemia. Said to have less than a week to live, Joanne needed a bone marrow transplant. Lucky for her, she had an identical twin whose marrow was a perfect match. Paying for the procedure, however, proved to be the toughest obstacle Joanne faced.

“My insurance company said they wouldn’t pay for the transplant because Linda wasn’t on the insurance,” said Joanne. “Hers wouldn’t cover it because she wasn’t the one who needed the surgery.”

The important thing: Linda was her donor and the transplant was successful.

They both developed their political identity gradually over the years. Joanne and Linda are both members of the National Organization for Women – and they pinpointed a cause that ignited their interest in politics.

Growing up in Virginia during the Civil Rights movement, the twins said it wasn’t uncommon to see racial injustice. One day, a riot broke out at their high school in response to news that a black student wasn’t allowed on the cheerleading team.

To peacefully put an end to the riot, Joanne and Linda joined some other students and played Frisbee in the middle of the skirmish.

“If you want to make a change get involved with a party,” said Linda, who became actively involved with the Democrats in 1980. “It doesn’t matter which one.”

Tuesday, even with the conversation veering into talk of leukemia and racial injustices, Joanne and Linda remained light-hearted, each feeding off what the other said. At times, the discussion turned into a playful competition.

Joanne wasted no time in trying to one-up her sister after Linda said she became involved in politics in 1980.

“I was first!” Joanne said.

Linda fired back, pointing out that she’s the older twin.

But in typical younger-sibling fashion, Joanne got the last word in: “By 29 minutes.”