Erika and Kaidy Wollman are twin sisters and students at Penn State. Although they look almost identical, the twins say they are actually quite different.

They like different sports, colors, have different appetites and even study different subjects in school. Erika is a Special Education major and Kaidy studies Arhitectural Engineering. 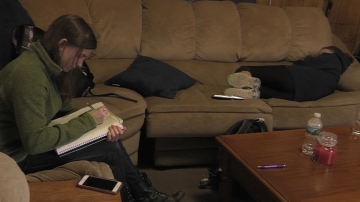 The twins said they are regularly confused for each other by their friends and even sometimes their boyfriends. Erika says that on one occasion she was walking to class someone and shouted, "Kaidy!" and threw a paper airplane made of newspaper at her head. Erika then turned to the person saying she was not Kaidy, making the other person feel awkward and they ran away. Kaidy had a much more confrontational story.

Once at a party, Erika had gotten into an argument with someone who later ran into Kaidy and thinking she was Erika, tried to hit her in the face. Having a twin on the same campus seems like it has both its benefits and its drawbacks, but Erika and Kaidy say they are enjoying all of them.

Adam Slear is a friend of Erika and Kaidy’s who says he has gotten them confused.

I am an intern at 98.7 The FREQ in State College where I record music for the station to play on the air, research bands and film live performances by bands in-studio for the station’s live streams. I also help to set up the sound equipment used in each performance. I hope to one day work for a radio station in Philadelphia and have my own show.