Walking off the field of the Superdome as a Heisman finalist, Chuck Bednarik Award and the SEC Defensive Player of the Year, Tyrann Mathieu had everything a player could ask, for except for a National Championship. What no one knew then, was that the 2012 BCS National Championship would be Mathieu’s last game in college.

Nicknamed the “Honey Badger”, Mathieu had one of the best defensive seasons in recent memory. On the season he posted 71 total tackles, one and a half sacks, two forced fumbles, two fumble return touchdowns, two interceptions, and two punt returns for a touchdown. Many said that Mathieu was a Heisman front-runner in 2012 with nothing to stop him but himself.

Unfortunately, Mathieu’s off the field issues did get in the way of his success.

After being for suspended one game in 2011 for violating LSU’s drug policy, Tyrann Mathieu was dismissed from the team in 2012 due to a violation of team rules. Cited as failing multiple drugs tests, Mathieu withdrew from LSU on August 17, 2012 and entered into a drug rehabilitation program in Houston, Texas.

One of college football’s brightest stars had fallen from grace and was about to fall a lot farther. On October 25, 2012, Mathieu and three other former LSU players were arrested on possession of marijuana. Marking the end of what could’ve been a storied collegiate career, Mathieu entered the 2013 NFL Draft about a month later with a whole lot to prove.

Listed at 5-foot-9 180 pounds, Mathieu was never regarded as a top NFL prospect due his lack of size, but that didn’t stop him. Showing incredible instincts and ball-hawking abilities, Mathieu had climbed to a potential second round pick before his off-field issues destroyed his stock.

The combination of a poor last game against Alabama, missing an entire season and having character questions left Mathieu with a lot to prove upon arriving in Indianapolis for the NFL Combine. Much like Vontaze Burfict the year before, Mathieu would need to blow away NFL teams in the interview room and on the field, or he would run the risk of going undrafted. 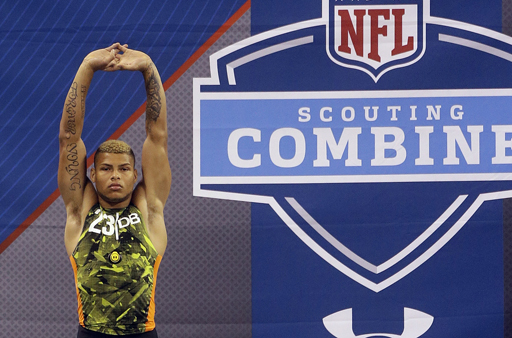 Unlike Burfict, Mathieu displayed the natural ability that made everyone fall in love with him during his college days. Running a 4.50 40-yard dash helped prove he possessed the speed necessary to be a cornerback and return man in NFL, but that wasn’t where he was most impressive.

Throughout the on-field drills Mathieu flashed incredible feet and rotation in his hips, in addition to having the best hands of any cornerback. Contrary to top cornerback prospect Dee Milliner of Alabama, Mathieu caught every ball and looked fluid while doing it.

But that was only half of the battle for Mathieu, who proved he could still play at a high level after missing a year, the other half would be in the interview room.

Saying all the right things, Mathieu took tremendous strides in regaining the trust of NFL general managers, coaches and scouts, but one question still remains: do they believe in him? Character questions, no matter how small, always leave NFL teams wondering if they should draft a player, which Tyrann Mathieu does in fact acknowledge.

“It’s not that I’m asking them to trust me now,” Mathieu said. “I’m just asking for them to give me an opportunity.”

Mathieu went on to acknowledge he probably cost himself “millions” because of his mistakes and that NFL teams will know about his track record when he meets with them.

Mathieu still has a great deal of work to do in further interviews and in his LSU Pro Day, but after a strong week at the NFL Combine, Mathieu has many believing once again that he is worthy of an early pick in the NFL Draft.