Up and coming DJ Seven


John Finazzo is a senior at Penn State. He is a disc jockey who goes by the name "DJ Seven" and has been a disc jockey from an early age, who got interested in the business by two former disc jockey's who would sneak him in the club. Here he would learn different aspects of crowd vibes and the relationship of how different songs changed the crowd. 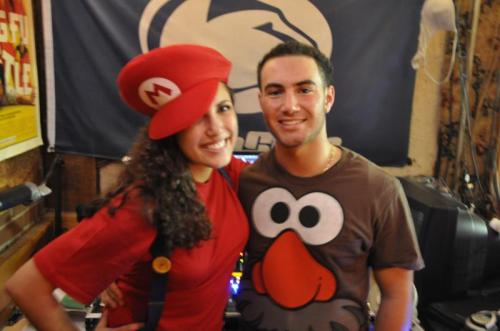 DJ Seven is an up and coming DJ who has been a DJ for four years professionally and has played in front of the likes of crowds in State College and New York. He really does not care what kind of music he plays "as long as it gets the crowd going and having a good time."

DJ Seven explaines the difference of what makes a real professional DJ compared to a "Bedroom Dj living in your mom's basement" with a few opinions.

DJ Seven is a senior at Penn State majoring in mechanical engineering who hopes to continue in the DJ world after graduation because it is major part of his life. "As long as im Djing, having fun with it and making people happy, that's all i want."

Dj Seven throws down hit after hit every Thursday night at The Shandygaff in State College starting around 10 pm. However, not only does he play in State College, PA he DJ's locations and gigs around his home in the Bronx, New York and the sourrounding areas. DJ Seven thinks that there is a big difference in styles between the two areas. A major difference, to him, is everyone just wants to dance and have a good time in New York where as in State College people are all about requesting songs and dancing to their own particular style of music.

I am hoping to become a sports journalist. It is a dream of mine to work for a magazine like ESPN or SI someday. I have a huge passion for sports at all levels and would like to become part of the sports journalism world after i graduate in May 2013.