“We wanted to start something that was real,” said Matt Bodenschatz. As the disturbing news of the Sandusky Scandal surfaced, a wave of devastation fell over the Penn State Community.

For Matt, the emotions and feelings were especially intensified. As a survivor of sexual abuse, Matt can relate to the tragedy in ways many cannot even fathom. From the moment news broke out, Matt became inspired to use his voice and his experiences to manifest what the Penn State community seemed to neglect, the victims.

Although many Penn Stater’s raised money, spread awareness and showed genuine concern for the treacherous actions against these boys, Matt along with other Penn State students felt it wasn’t enough.

Students organized an event called, “Voices for Victims,” where members of the Penn State community could write heartfelt letters, offering support and acting as a reminder that Penn State still, and always will, care. 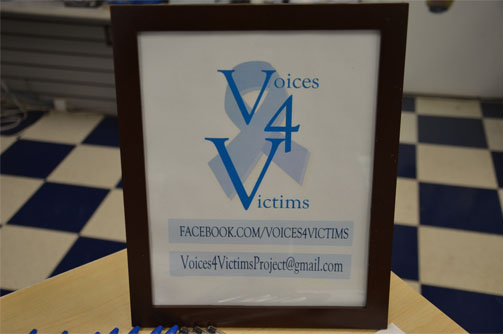 The Penn State and State College communities continue to struggle to comprehend the horrific crimes allegedly committed, on their own ground, against innocent boys and young men.  All find themselves overcome with questions and struggling to find a meaningful, personal way to respond.

The Voices for Victims campaign, headed by Matt Bodenschatz (an adult survivor of childhood sexual abuse and a Penn State student,) is a project conceived by a small group of Penn State students.  It is offering everyone the opportunity and means to take simple, direct and sincere action that will show their support.

Voices for Victims will be a 5-day project spanning Monday, April 23 thru Friday, April 27.  The project involves inviting everyone in the Penn State, State College and national community to write a personal letter, note or card to the alleged victims of these crimes to show support for and recognition of their uncommon, inspiring bravery in coming forward and to make certain they know they are thought of and appreciated.

By an arrangement that is already in place, the messages that are collected will be delivered to the victims through their legal counsels, and will be rotated in a manner that enables each victim to see and read them.  This ensures that confidentiality is maintained and respected throughout the process and provides an intermediary through which support can be conveyed.

Messages can be placed in designated “dropboxes” that will be placed in numerous places in the State College community and in select locations on the PSU-University Park campus during the week of Mon23April thru Fri27April.  Additionally, Voices for Victims can receive letters, cards and notes via USPS, utilizing their postal/PO Box address.  The postal option will remain in place for several months beyond the April campaign week, enabling the project team to accommodate those living outside of the Penn State/State College area who would like to participate.  For those who prefer a digital messaging option, messages can also be sent to or posted on the campaign’s Facebook page, or sent to their email address, Voices4VictimsProject@gmail.com

The Voices for Victims project team welcomes any press or public inquiries, requests for further information, or offers of assistance in making this advocacy initiative a success.

Ballroom Dancing: An Art For Life