Wanda Crosby-Parsons: Not your normal hunter

The start of hunting season is a big day for everyone who loves the sport. To some, hunting is more than a hobby, it is a lifestyle. People who are associated with hunting are considered outdoorsmen. But there are outdoors-women, too. 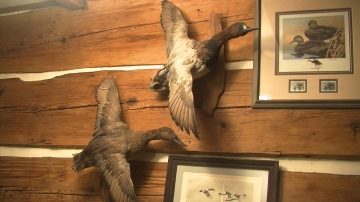 Wanda Crosby-Parsons is a woman who has been hunting for as long as she can remember. She says she was born into hunting. Now living in Spruce Creek, Pa., she and her husband both hunt.

Wanda says her father used to take her hunting when she was just a child. She and her siblings were all hunters. She loved it so much that she continued hunting while in college.

She joined a college hunting club . She was not allowed on a hunting trip in college one time because some of the men involved with the club did not think that women should hunt.

Wanda says that not only was she more qualified than any of those men going, but she was better than them. "Did I know more than them? YEAH!" Wanda hunts mostly birds and other small animals, she still does not stray far from her passion: her dogs. Her husband prefers bigger game, like deer.

Wanda has four dogs. Her favorite dog is Ricky. Wanda takes Ricky hunting with her every time she goes out. She says that dogs know more about hunting than humans do andthat is what makes it so interesting to be in the woods with her faithful companion.

Wanda Crosby-Parsons shows off one of her many guns. This one is a six gauge shotgun that holds three shells. Although this gun has seen better days she says that it still works well today.

Hello my name is Michael Bradley. I am currently a senior at Penn State University. My major is broadcast journalism and I have a minor in human development and family studies. I am from Philadelphia, Pennsylvania and have lived there my whole life.

My main goal in life is to receive a job position in sports journalism. My other interests include radio production and photo journalism. I would be happy to work in any of these feilds.

Warrior Women: Lisa Scholder, Giving Back In Her Art

The best wurst in State College