Dustin McQuaid -- or D-Mac -- is a 21-year-old white rapper from Hedgesville, West Virginia.

He found his passion for rap and hip-hop even though most people in his small-town community only acknowledged country music as an acceptable genre to listen to.

McQuaid began writing his own raps when he was 10. He admits that then, his lyrics were not very good because of his small vocabulary. As he got older, his vocabulary grew as well as his maturity. His life experiences contributed to the maturing of his music. He believes that his lyrics are deeper and have more meaning in his latest album than they ever have in the past.

McQuaid has struggled in the past with name calling and teasing because of the fact that he is a white rapper. Today, he may still be teased, but he has moved past the name-calling and realized that he is who he is, and nothing will change that. He is confident in himself and his music.

His mix tapes and albums all carry a similar theme. He raps a lot about others' negative thoughts and feelings toward him and that the negativity has helped him overcome his obstacles and helped him become a stronger person and a better performer. 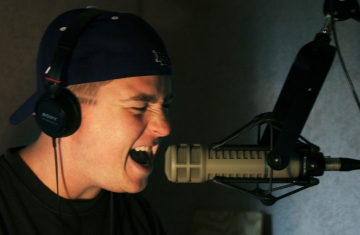 McQuaid enjoys every minute of his hobby and has plans to make it a career. In the past few years, he has been working hard to write and release new songs.

His first mix tape, titled Just Me, was released in 2009. He explains that this mix tape included songs that were of poor quality (due to a lower quality microphone). The songs were angry with offensive lyrics that lashed back at those who spoke negatively against him.

His second mix tape, The Way It Is, was released in 2010. He says that this album was still of low quality, but believe that it was transitional with a variety of tracks. His third mix tape, How To Rap 101, was released in 2011 and is of better quality (due to better recording equipment). McQuaid raps about how he feels he has more talent than some of the popular mainstream artists and that he can be better than them.

His first official album, New Beginning, will be released later this year. He recently released his single, Better, online. The song is available on iTunes and Amazon.com. He is also released the song on a radio station in State College, Pa.

Besides working hard for his upcoming album, recently, McQuaid has put on shows and entered contests. He has performed for a family member’s wedding and a local event in State College.

He also entered in the Macadelic Freestyle Contest. The winner of the contest got to open for Mac Miller in the Bryce Jordan Center at Penn State University. Unfortunately, McQuaid did not win the contest, however he was one of the finalists. He is currently signed up for the Happy Valley’s Got Talent contest. He will soon be working on his music video for Better.

He will be continuing to send his demo to record labels in hopes of landing his big break.

McQuaid decided to enter the "Macadelic freestyle contest." He freestlyed using his own lyrics to one of Mac Miller's songs and submitted it with many others'. He made the final round of judging and had his video sent to Mac Miller himself for the final decision. Unfortunately, McQuaid's video was not the winner, however he was presented with the opportunity to present the performing artist's on stage at Penn State University's Bryce Jordan Center Tuesday, April 3, 2012.

I am a senior majoring in visual journalism with a minor in Sociology. After my internship with the local radio station (B94.5/WBHV-FM), I went on to become a producer for the same station. I am one of the few responsible for kicking off a morning show for a sister station (Eagle 98.7/WEMR-FM). Working with the State College local radio stations has taught me to be a part of a professional team. I learned to work with a switch board, produce news worthy content to be read on air, and work with editing software such as Cool Edit Pro 2.0. My radio experience has opened doors for me and has helped me advance to my ultimate goal of being a producer in either the film, music, or radio industry.

The life of a student CEO