Liana Van is a Senior here at Penn State majoring in Finance. She is very involved in campus organizations such as the Power of Pink, the Rotaract Club and the Blue & White Society. She holds an executive position within each club as well as maintaining good grades in all her classes. 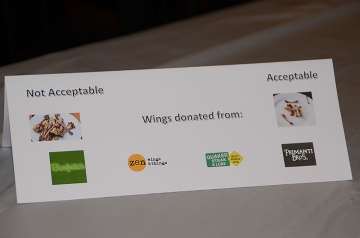 The place card displaying the types of acceptable and unacceptable ways the wings should look after a round. Photo by Valeria Merced

The majority of her free time is filled with meetings for her position in the Blue & White Society.

She is the Director of Community Service for Relay for Life. So, she is in charge of organizing different fundraisers to raise money for Blue & White Society’s Relay team. She does this with the help of her two chairs and other members involved in the organization’s Community Service committee.

Relay for Life is a national charity that helps raise money for the fight against cancer. Penn State has an overall committee, however other organizations have their own teams that hold their own fundraisers. One fundraiser that Van and her chairs spent much of their time planning was Wing Bowl.

Wing Bowl is a wing-eating contest where participants are put into teams and then they have to eat a plate of 30 wings faster than the other teams.

As the day got closer, Van was anxious about how the event would go.

After spending so much time planning Wing Bowl, she just wanted it to be a success. “I was worried that it was going to go very wrong and that nobody was going to show up, but it turned out to be really great!” she said after the event.

For the majority of fall semester, Van planned out the logistics and process of Wing Bowl with her two chairs and the Vice President of Programming for Blue & White Society. She had to figure out when to have it and where. She decided on November 19th at 7:00pm at the Hintz Alumni Center on campus.

After that she had to call different places to get wings donated and then she had to figure out the prizes that the winners would receive. This involved her chairs inquiring at different locations downtown about possibly donating prizes. Another process they had to go through was promoting the event. She had to think of a slogan to put on the fliers and posters.

“I decided to use ‘Happy Wingsgiving’ because the event was taking place the Thursday before Thanksgiving break, so I thought that was perfect” Van said.

Once all the fliers and posters were ready, Van and her chairs put them at various locations on campus. Also, they spent a few days the week before in the HUB handing out fliers and trying to get people to sign up to participate. The participants had to pay $5.00 and they were put in a team of four.

With the proceeds from Wing Bowl, Blue & White Society’s Relay team added $210.00 to their total.

The next event she is preparing for is Riff Off on December 9th at 7:30pm in the Flex Theatre in the HUB.

“I’m so excited for Riff Off because Blue & White has never done one before!” Van said.

A few other funraisers planned for the Spring semester are another Five Guys one, a Panda Express one and a date auction.

She also gets to pair up with Relay for Life’s executive committee and a few other organizations on campus to plan the Race to Relay 5K. Then the only event left will be Relay for Life weekend April 9-10, 2016 from 2:00pm-2:00pm on the HUB lawn.

The winners of the Wing Bowl, the Kodiak Bears, want to continue eating more wings.

Valeria Merced is involved with different organizations on campus such as PSNtv and she is on the executive board for the Blue & White Society as the Director of Internal Relations. This year she is one of the producers for 46 LIVE which is the THON webcast. One day she hopes to work in the entertainment industry.

A Different Kind of Classroom