Poetry is not the first thing to come to mind when you set eyes on Penn State junior Davon Clark. The tattoos peeking out from his T-shirt sleeves, the wrestling equipment he typically has hanging from his backpack - which also explains the rugged physique - doesn’t exactly fit the stereotype of a poet.

Clark proudly wears his title across his chest, literally. It is not uncommon to find him in his “Poet” sweatshirt, styled after the famous Robert Indiana “Love” sculpture from Clark’s hometown of Philadelphia.

Poetry and education are what engage Clark, but it was wrestling that brought him to Penn State. An avid wrestler in high school, and with encouragement from now-alumnus and three-time NCAA collegiate wrestling champion Ed Ruth, Clark set out to walk on to Penn State’s wrestling team in his freshman year. He didn't make the cut.

After the rejection, Clark said he turned to alcohol and later drug abuse. He struggled with it for the rest of his freshman and part of his sophomore year. Clark said he turned his life around when he started going to Penn State Christian Athletics. He also began to focus more on club wrestling, where he could still be on the mat and indulge his passion for wrestling, but “it wasn’t a job anymore.” 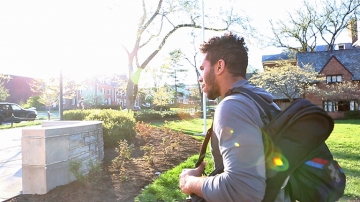 Davon Clark walks through campus with camera equipment and his ukulele on Sunday, April 24, 2016.

His journey in life is what inspires his writing. Every day he writes a thousand words about what ever comes to mind just to keep him writing every day. Clark said about 1 in 20 of his daily writings will bloom into a new poem.

As Clark continues to write and perform his poetry, he thrives from it. He said he doesn’t exactly hope to achieve fame or notoriety from his work, but rather he hopes that he can use his passion to educate others.

Davon Clark said the significance behind his original poem “Sunset,” is more than just his admiration for one of his influences, MarShawn McCarrel, but also his relation to the same issues that led to McCarrel's suicide.

Clark explained how the piece is also a thank you to McCarrel for his contributions to the poetry community.

"I hope that I can use your strength that you put out into the world to help myself so that I can help other people."

Nick has over seven years of experience behind the camera with three of those years spent working for Penn State’s independently published student run newspaper, The Daily Collegian, and has had plenty of opportunities to expand his portfolio and experiences in a wide array of shooting conditions, including sporting events, concerts, spot news, and general event coverage. Nick is not only skilled with just shooting stills, but is also proficient with telling a story through multimedia, and has completed Cumberland County College’s video production program. Nick looks forward to putting his skills to good use professionally, whether it be through an established publication or freelance, and is always willing and eager to work and learn more.

Her Dream to Stay