From the national conventions to the Paralympics, from Big Ten football to the presidential election captured in photographs by Penn State journalism students. 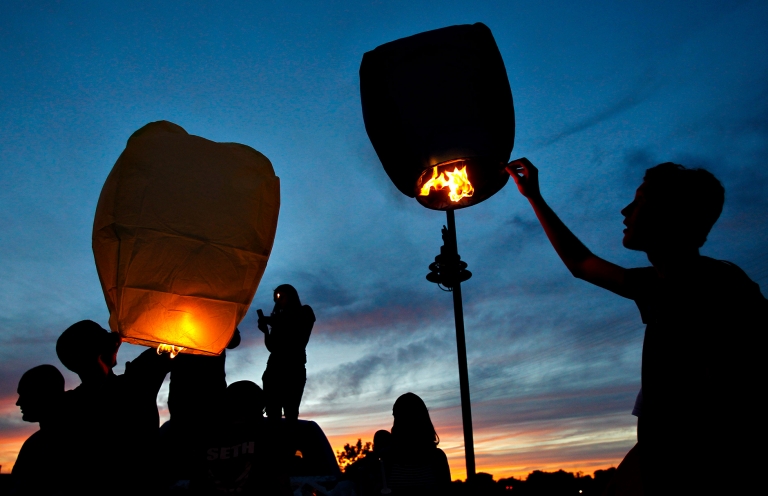 Friends and family celebrate and mourn the life of David Hardison III, age 22, of East Toledo, Ohio, June 7, 2016. Hardison took his life near the Maumee River on Memorial Day after a losing a custody battle. / Photo by Cameron Hart 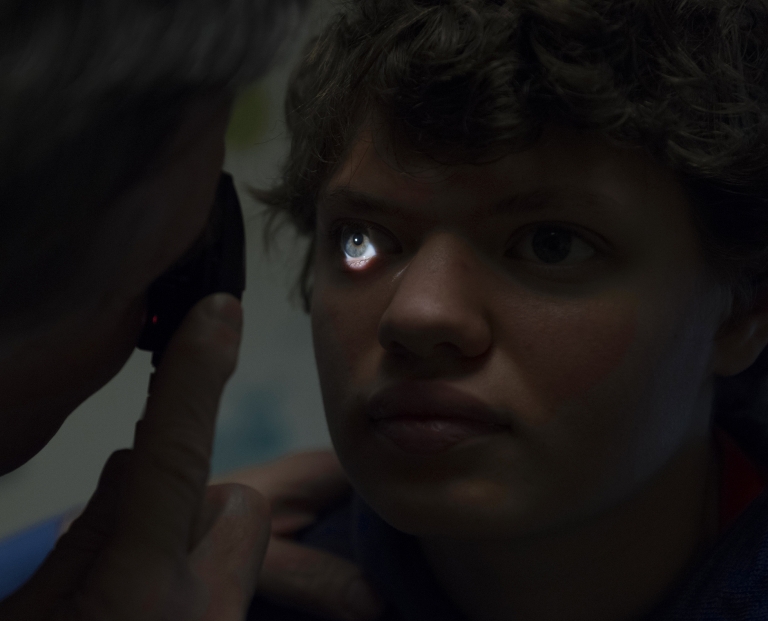 Dr. William Trescher uses an ophthalmoscope to check Rachel Wolf's eye during a routine physical at the Penn State Hershey Medical Group Windmere Centre in State College, Pa. on March 24, 2016. Rachel, 17, has microcephaly, a condition in which a baby’s head is significantly smaller than expected due to abnormal brain development. / Photo by Cameron Hart 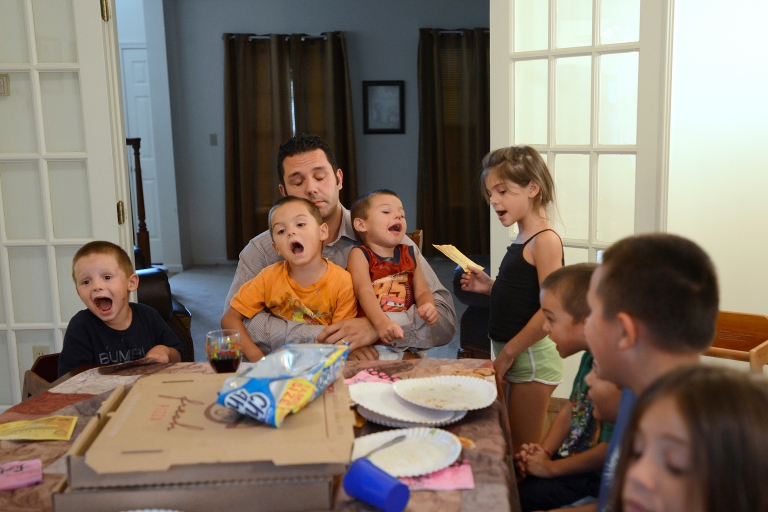 Nicholas Diaz pauses to pray during a dinner with his nine children, all under age 10, at their home in Easton, Pa. / Photo by Katie Hynson 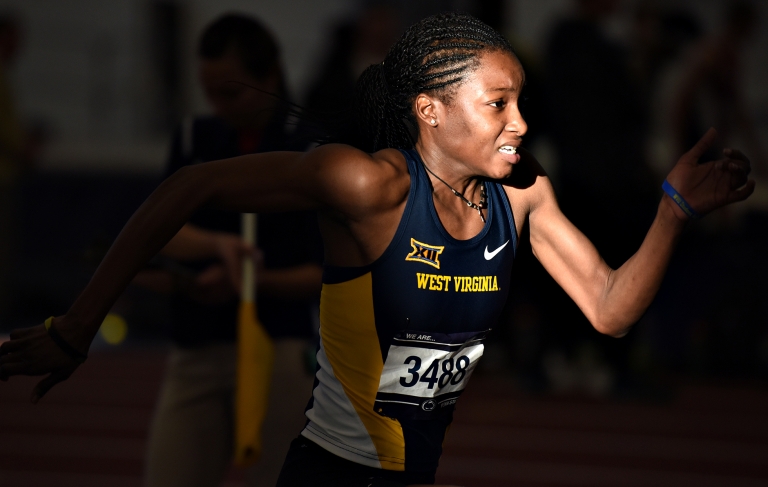 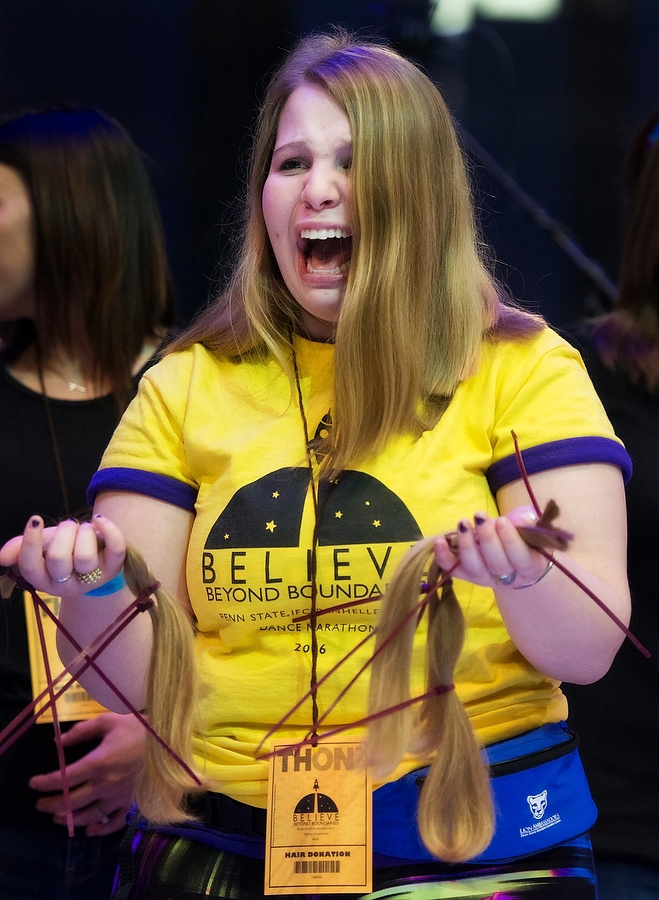 Dancer Relations committee member Carly Chroman holds her hair after donating it for the 'Wigs for Kids' program Saturday afternoon at THON 2016. The 46-hour dance marathon raises millions of dollars each year for the treatment and support of children with cancer. / Photo by Cameron Hart 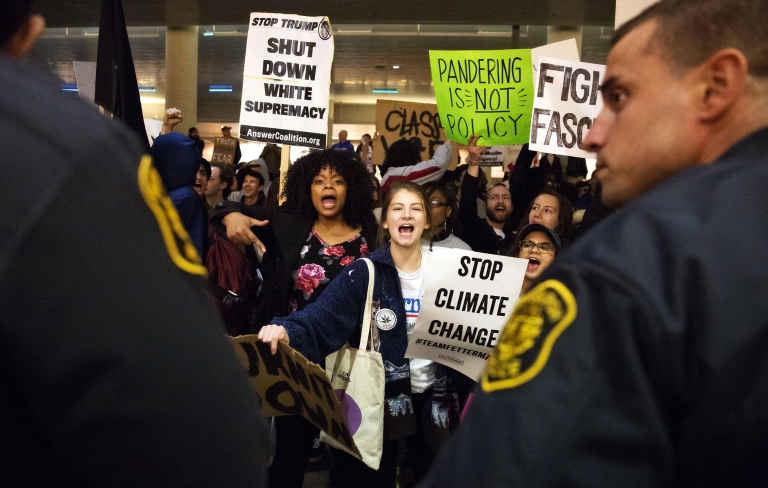 Sarah Hartley, from Pittsburgh, holds up a sign and screams at policemen with other people as they protest outside of the David L. Lawrence Convention Center prior to Presidential candidate Donald Trump's rally in Pittsburgh on Wednesday, April 13, 2016. / Photo by Antonella Crescimbeni 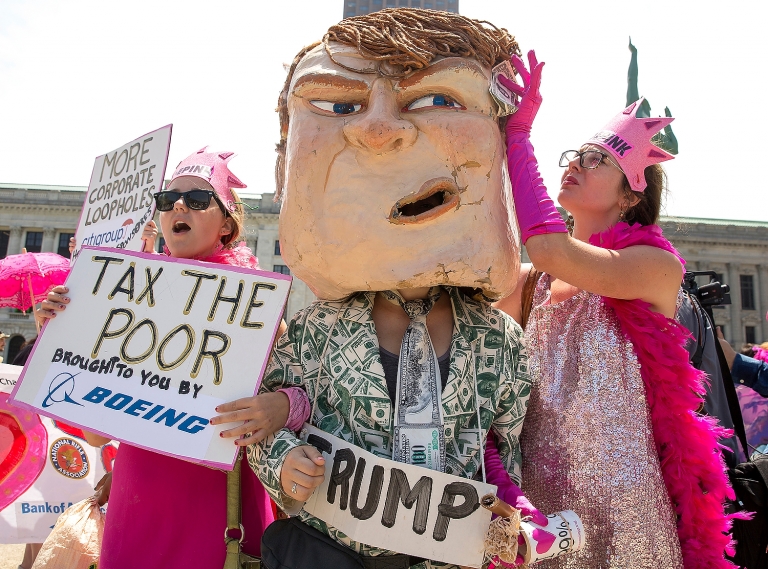 Chelsea Byers, right, of Los Angeles, pretends to use money to wipe sweat from the brow of a giant Donald Trump head worn by Alice Newberry of Washington State. They are joined by Rebecca Green, left, of Cleveland. The women, members of "Code Pink," marched with other protesters through Public Square in Cleveland on Monday, July 18, 2016 at the Republican National Convention. / Photo by Antonella Crescimbeni 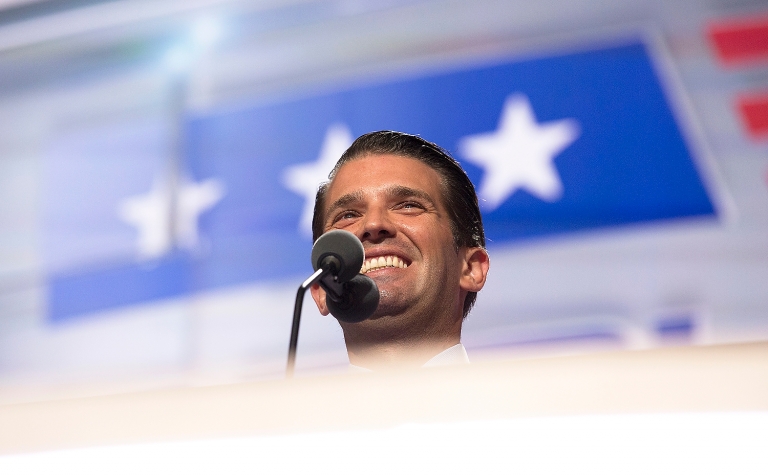 Donald Trump Jr. practices on stage in preparation for his speech on the second day of the Republican National Convention at the Quicken Loans Arena in Cleveland on Tuesday afternoon, July 19, 2016. / Photo by Antonella Crescimbeni 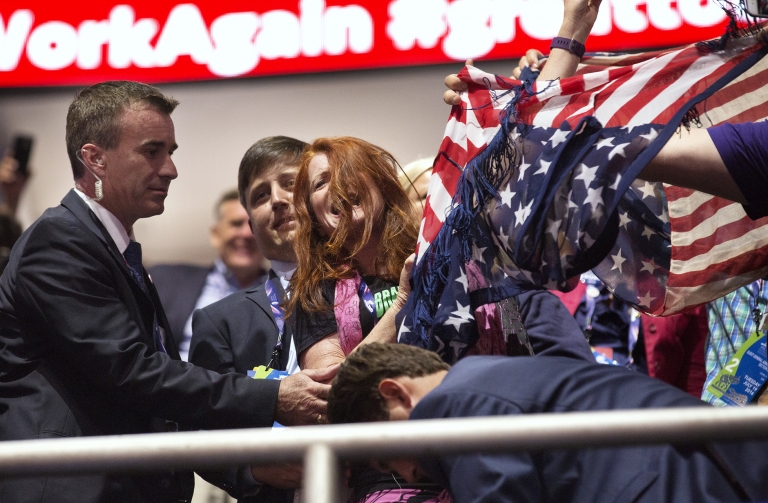 A protester is blocked by other people after holding up a "No Racism, No Hate" sign on the second day of the Republican National Convention at the Quicken Loans Arena in Cleveland, Ohio on Tuesday, July 19, 2016. / Photo by Antonella Crescimbeni 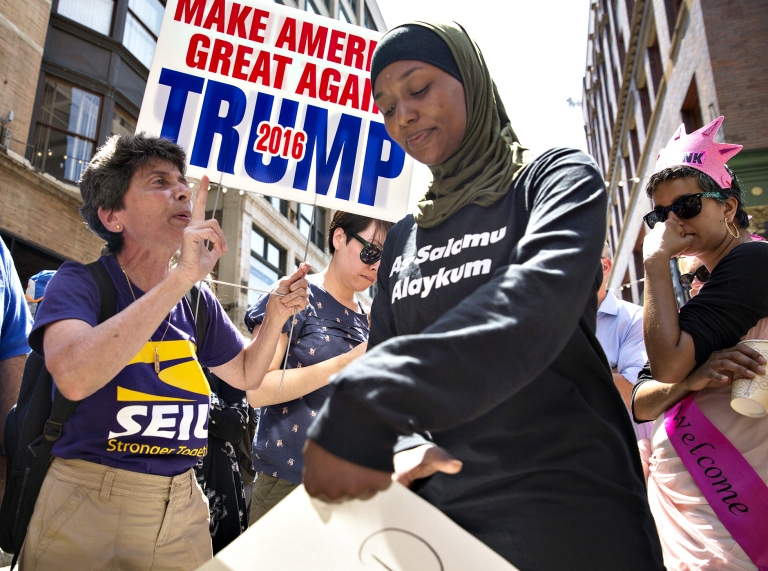 Mariam Noujaim, 62, who is from Egypt but currently living in California, left, tries to make a point about immigration with Desiree Hoy, of Detroit, MI, on East 4th Street in Cleveland, on the third day of the Republican National Convention. Hoy's shirt bears a Muslim greeting written in Arabic, "Peace Be Upon You." / Photo by Antonella Crescimbeni 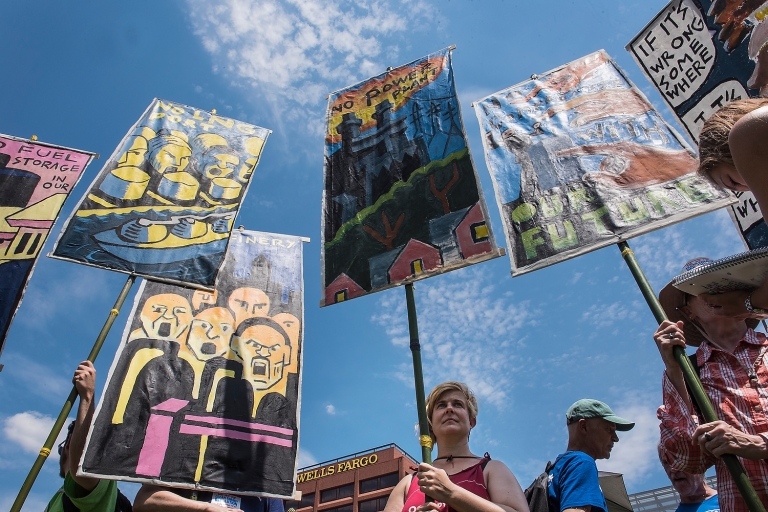 Kim Fraczek, center, co-director of the Sane Energy Project, protests against fracking at a Clean Energy Revolution march near Independence Hall on July 24, 2016, just before the start of the Democratic National Convention. The banners, painted by artist Seth Tobocman, of New York City, depict the process of fracking and its effects on the environment. / Photo by Gabrielle Mannino 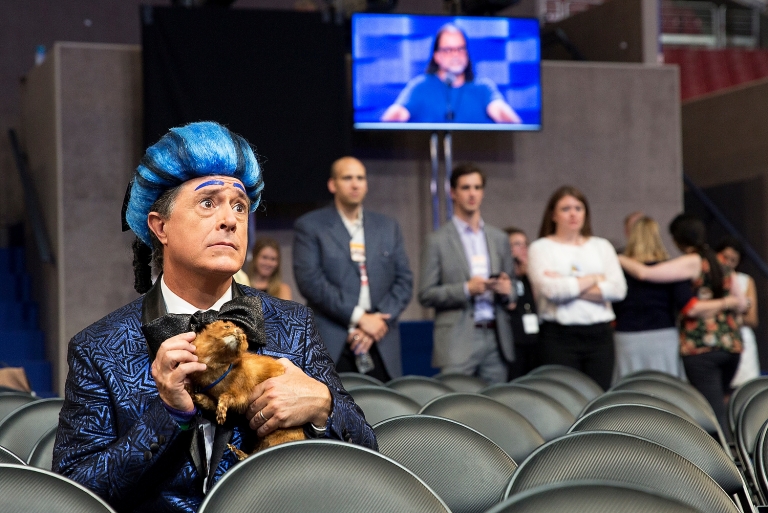 Stephen Colbert, dressed as the character Caesar Flickerman from "The Hunger Games" franchise, stares at the Wells Fargo Center stage while he pets his pet weasel Caligula, the day before the start of the Democratic National Convention in Philadelphia on Sunday, July 24, 2016. Colbert took the stage before the Republican National Convention in Cleveland, Ohio and was hoping to do the same in Philadelphia. / Photo by Antonella Crescimbeni 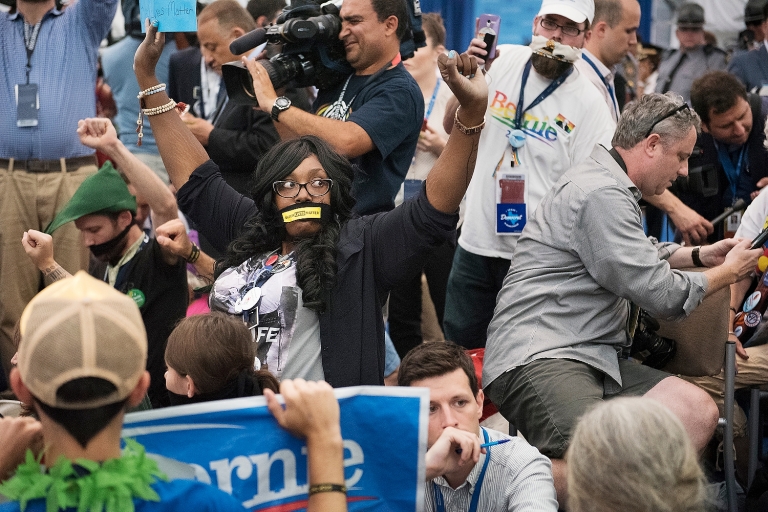 Following the roll call vote confirming Hillary Clinton as the Democratic nominee, hundreds of Bernie Sanders supporters held a silent protest inside the media facility next door to the Democratic National Convention in Philadelphia on July 26, 2016. / Photo by Gabrielle Mannino 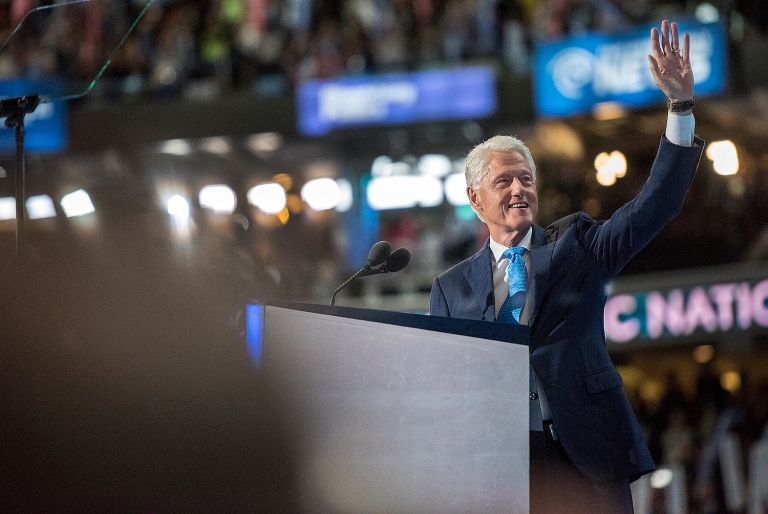 Former President Bill Clinton speaks at the Democratic National Convention Tuesday night. He recounted the story of Hillary's life from the time they met until now, making the case for why he thinks she should be president. / Photo by Gabrielle Mannino 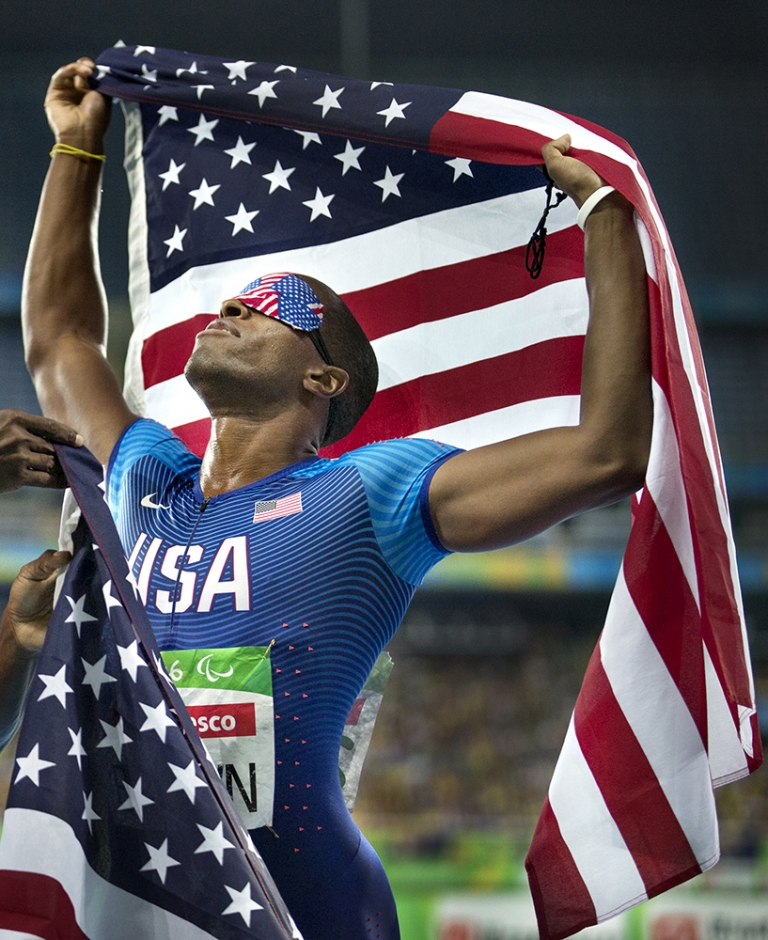 David Brown holds an American flag as he celebrates his Paralympic record time of 10.99 seconds in the 100 meter dash at the 2016 Paralympic Games at Olympic Stadium in Rio de Janeiro, on Sunday, Sept. 11, 2016. / Photo by Antonella Crescimbeni 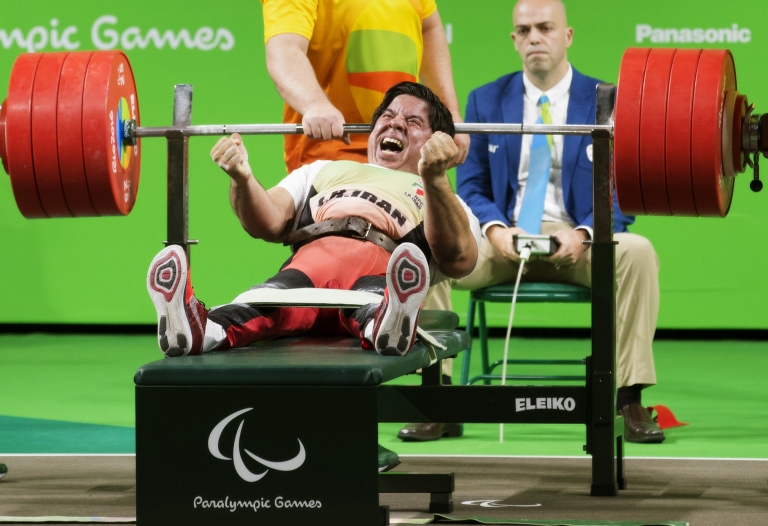 Majid Farzim, of Iran, celebrates after breaking the Paralympic and world records in the 80 kg class at the 2016 Paralympic Games in Rio de Janeiro on Monday, Sept. 12, 2016. The 2012 Paralympic gold medalist lifted 240 kgs to beat the existing record and win gold again. / Photo by Antonella Crescimbeni 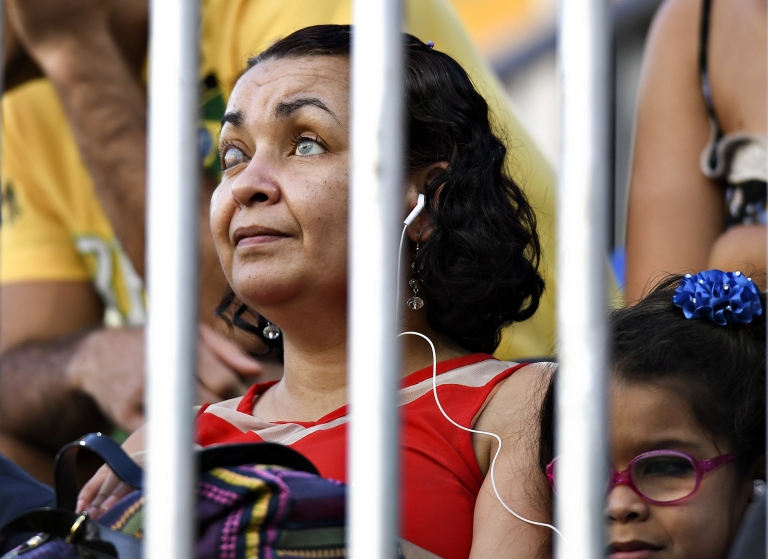 A visually impaired woman and her daughter listen to the game with headphones during the men's football 5-a-side the 2016 Paralympic Games in Rio de Janeiro, Brazil, on Sunday, Sept. 11, 2016. Brazil defeated Turkey 2-0. / Photo by Cameron Hart 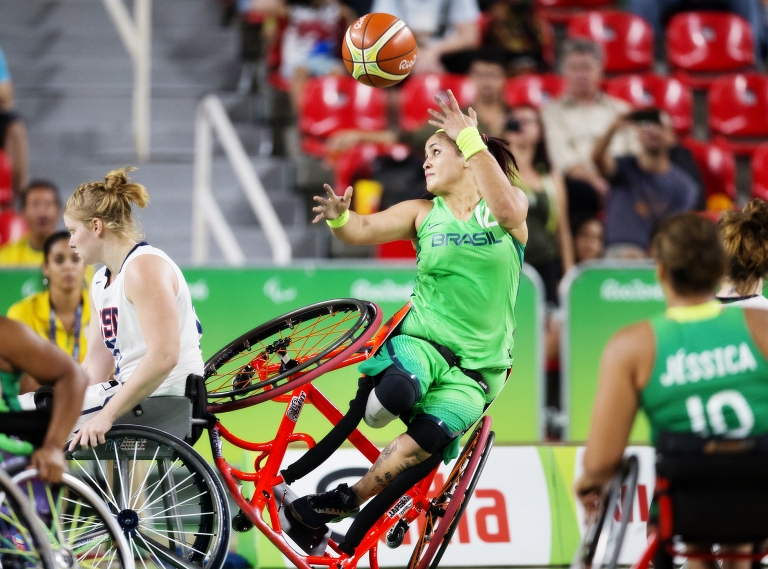 Brazil's Lia Martins takes a shot as she falls to the ground during Brazil's game against the U.S. in the women's wheelchair basketball quarter finals at the 2016 Paralympic Games in Rio de Janeiro, Brazil, on Tuesday, Sept. 13, 2016. / Photo by Antonella Crescimbeni 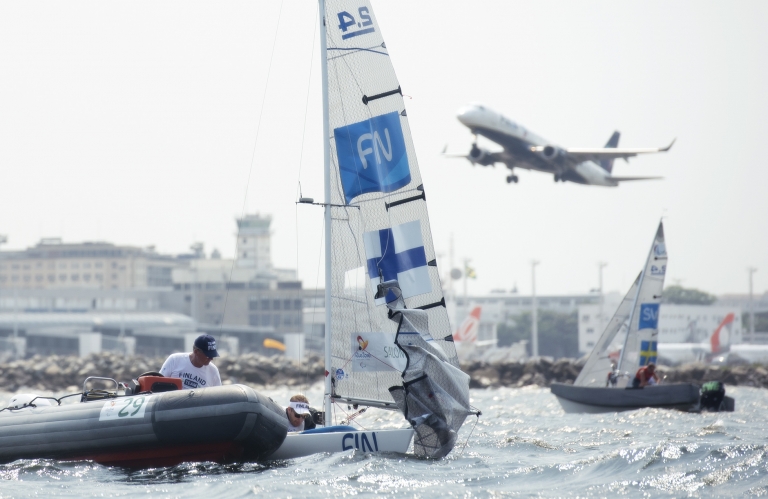 Finnish sailor Niko Salomaa works with a member of his support team during the transition between the third and fourth races in the 1-person keelboat classs at the 2016 Paralympic Games. The starting line for the races is located at the end of the runway for Rio de Janeiro International Airport. / Photo by Cameron Hart 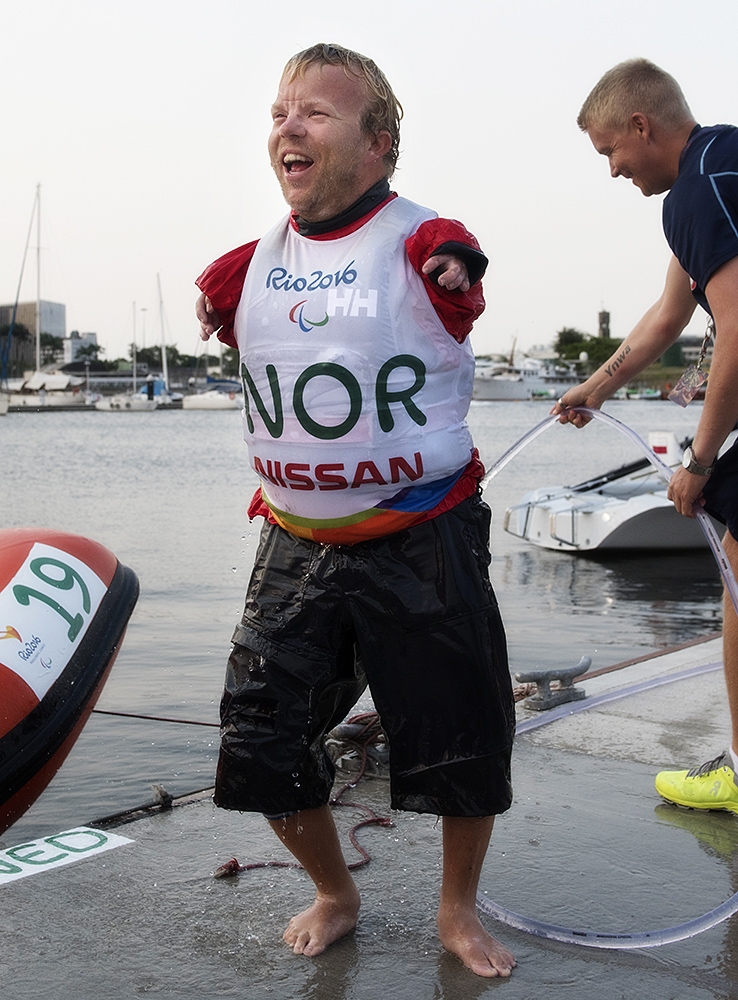 Bjornar Erikstad emerges from a fresh water shower from a hose after competing in the 1-person keelboat class in the Atlantic Ocean off Rio de Janeiro at the 2016 Paralympic Games. / Photo by Cameron Hart 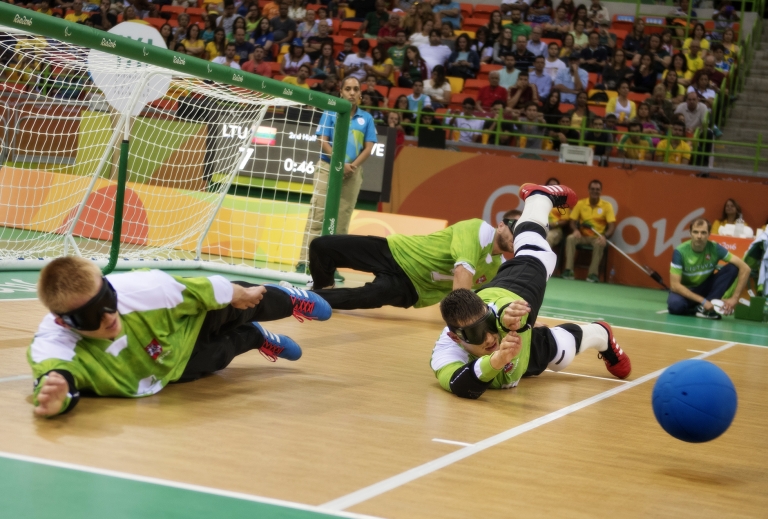 Lithuania's Justas Pazarauskas, left, Mantas Brazauskis and Genrik Pavliukianec block a shot during the men's goalball semifinal at the 2016 Paralympic Games in Rio de Janeiro, Brazi. The players depend on the sound of a rattle in the ball to play defense. Lithuania defeated Sweden 7-2. / Photo by Cameron Hart 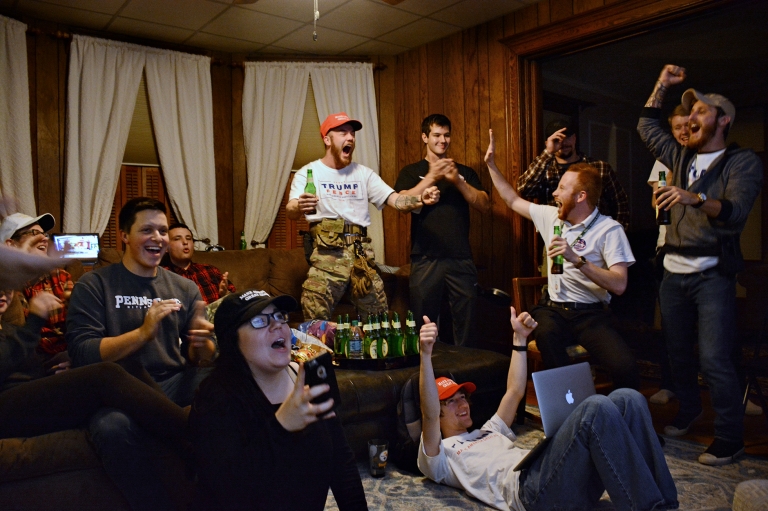 Members of the Bull-Moose Party celebrate as they watch election returns coming in favor of their candidate, Donald Trump, on Tuesday, November 8, 2016 in Tyrone, PA. Members decided as a group to have a private viewing party away from campus. / Photo by Junior Gonzalez 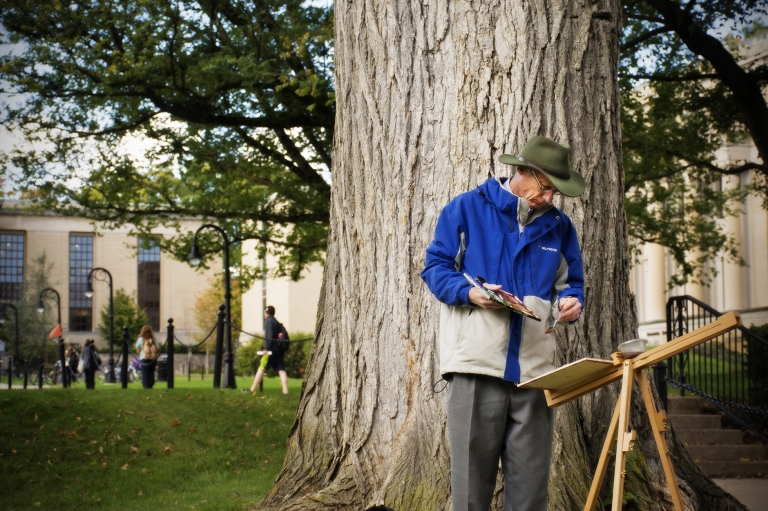 Tom Boothby, professor of architectural engineering, paints a picture of Old Botany the afternoon of Oct. 13, 2016. / Photo by Matthew Guerry 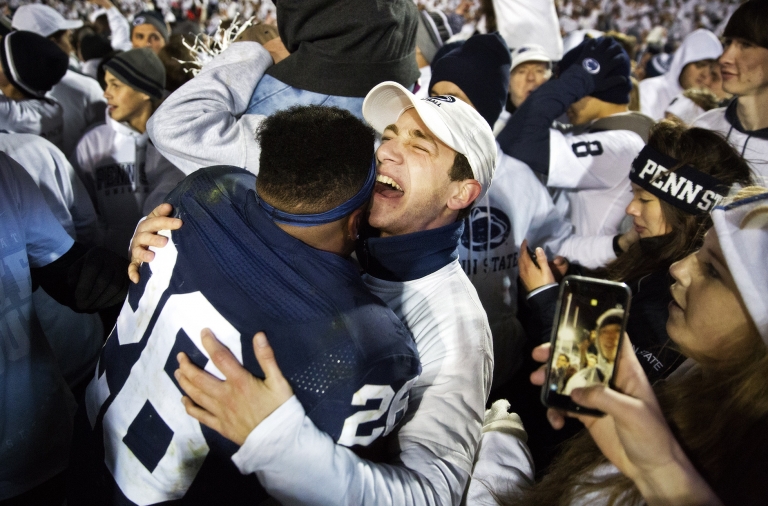 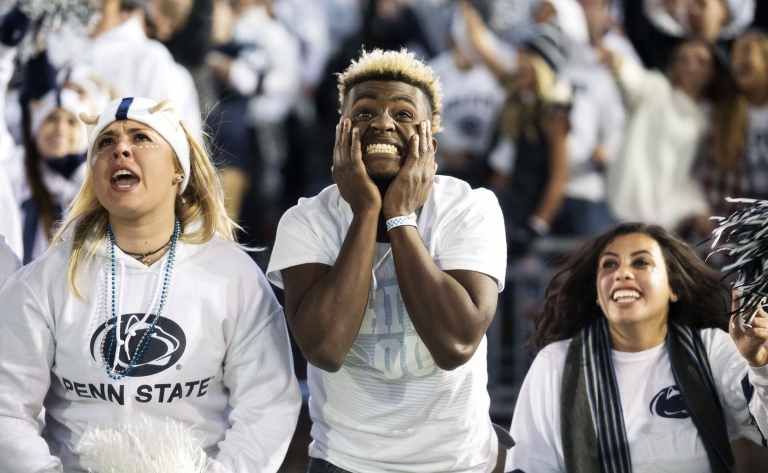 Penn State fans reacts after a touchdown is almost scored during the game against Iowa at Beaver Stadium on Saturday, Nov. 5, 2016. The Nittany Lions defeated Iowa 41-14. / Photo by Antonella Crescimbeni 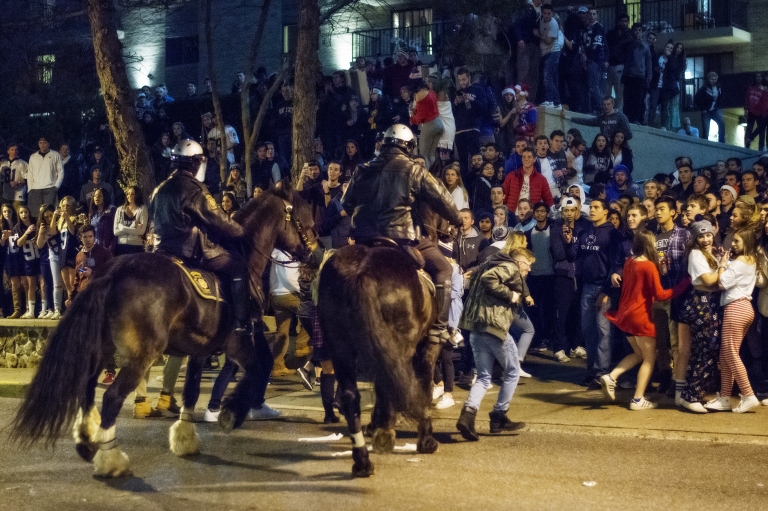 Pennsylvania State Police clear the street during a riot in downtown State College after Penn State defeated Wisconsin to win the Big Ten Football Championship in Indianapolis on December 3, 2016. / Photo by Arif Aminuddin 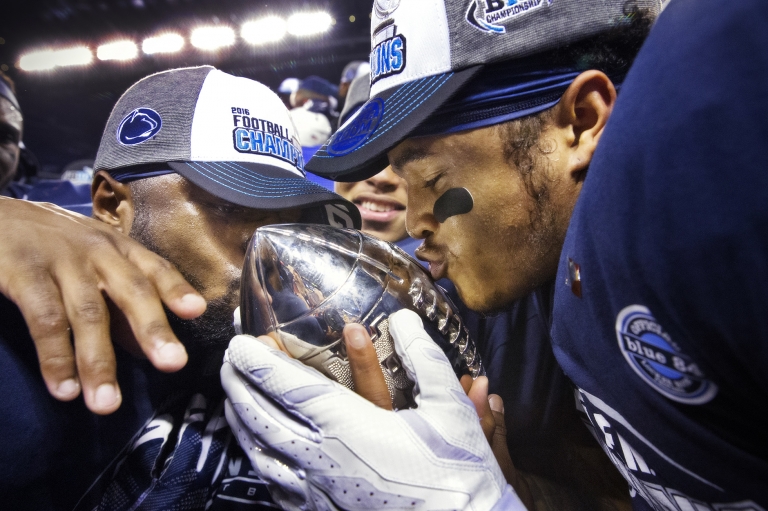 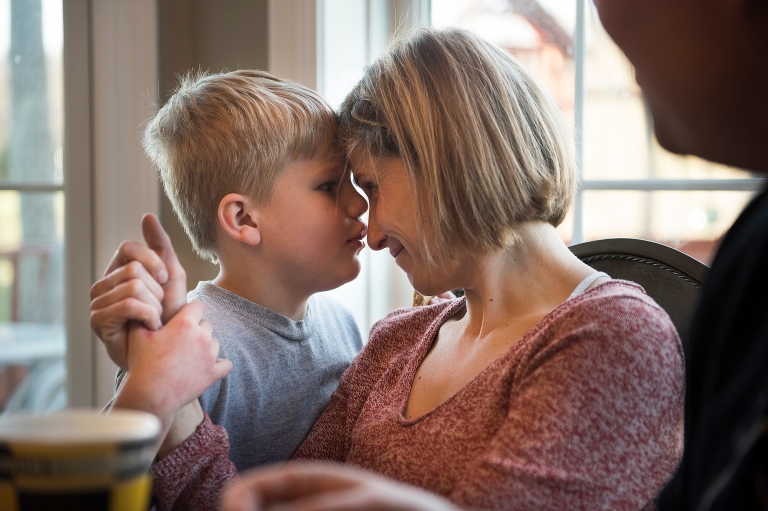 Layton Covol leans in to give his mother, Jamie Barbarich, a peanut buttery kiss to apologize for being rowdy at dinner time in their State College home. His loud behavior worsens Barbarich's headaches caused by a brain tumor she has been battling for almost 10 years. / Photo by Haley Nelson