A remarkable year captured in photographs by journalists in the Donald P. Bellisario College of Communications. 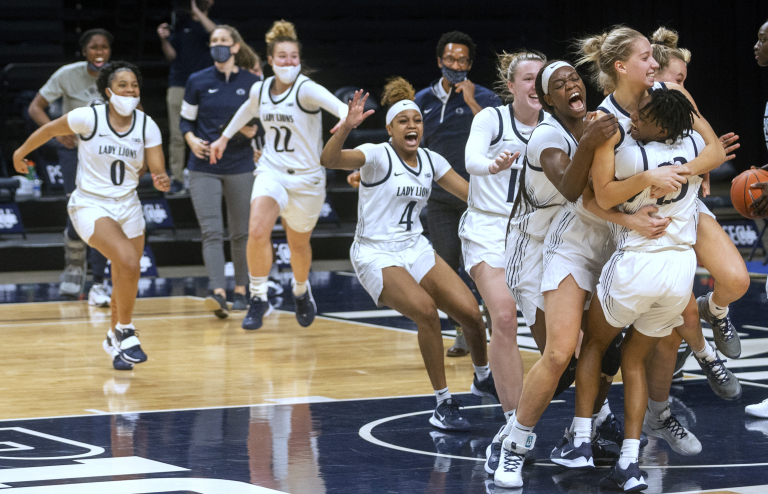 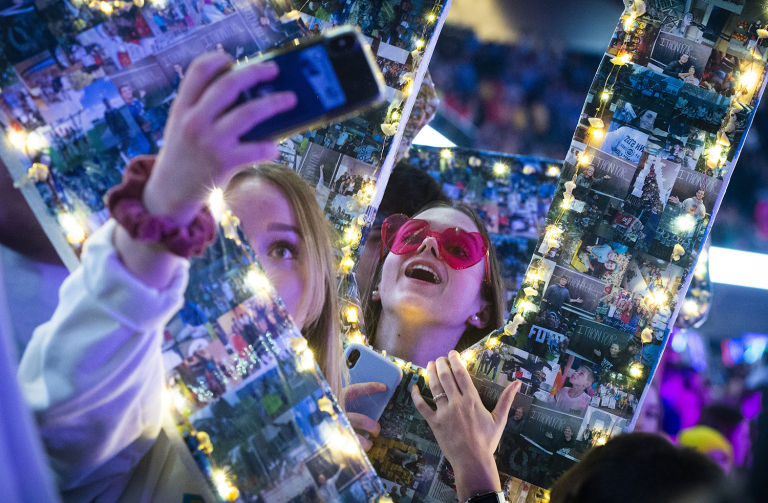 Penn State students Rebecca Siemon, left, and Samantha Biederwolf take a selfie with their THON organization FOTO’s letters in the stands of the Bryce Jordan Center during Penn State THON on Friday, Feb. 21, 2020. Penn State THON is the world’s largest student-run philanthropy, a 46-hour dance marathon, partnered since 1977 with the Four Diamonds Fund to support families of children with pediatric cancer and fund cancer research. / Photo by Lily LaRegina 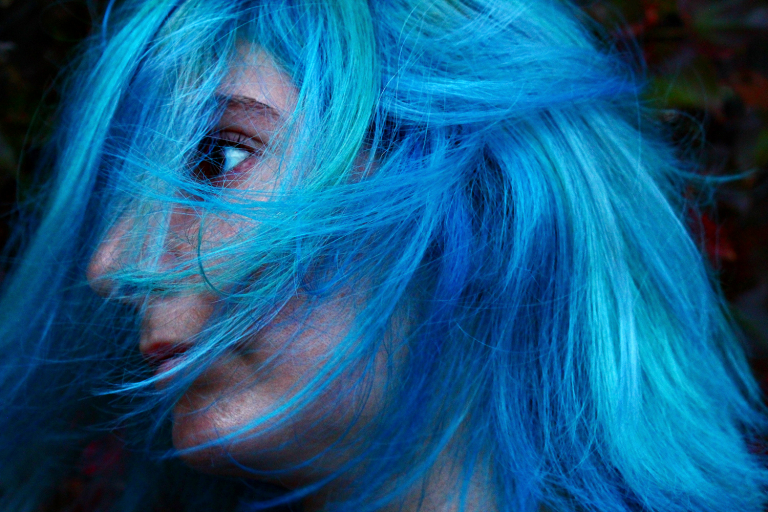 Tina Leigh, photographed in North Providence, RI in October 2020. Her hair represents a security blanket for a women who is an introvert, trying to shield herself from the world. Yet, at the same time, her eyes and lips coming through represents the model still being present and wanting to be, in a small form, a part of the world. / Photo by Christopher Stanton 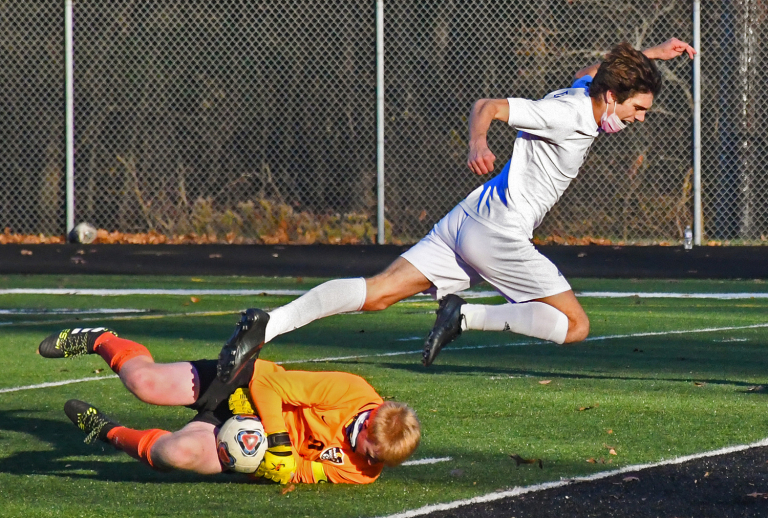 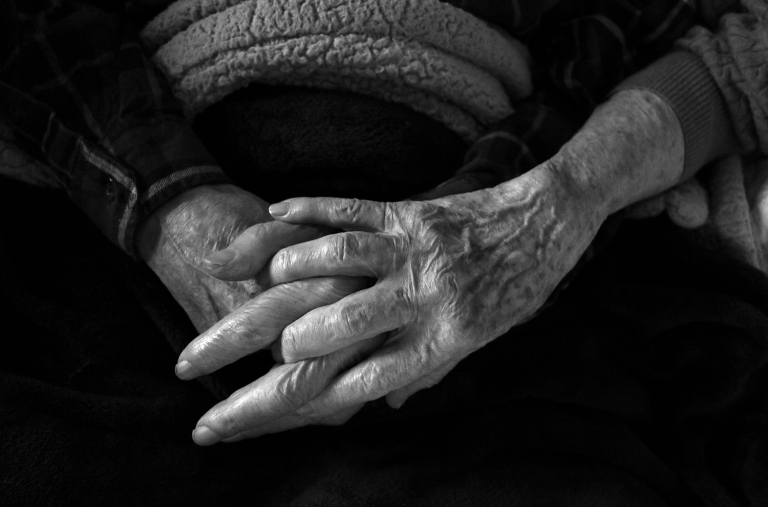 Nancy Frantz (wife) holds hands with Bob Frantz (husband) as he lays sleeping in his hospice bed on March 21, 2020. While quarantine looks different for many people, for some, like Bob and Nancy Frantz, it looks similar to normal, daily life. / Photo by Lexi Elder 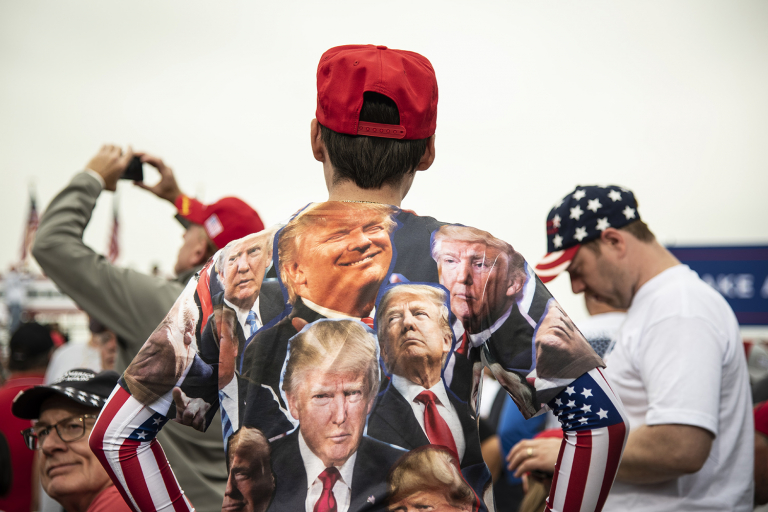 Anthony Uliana, 18, of the Poconos at the president’s Great American Comeback Event at the Harrisburg International Airport on Saturday, Sept. 26, 2020 in Middletown, Pa. In his remarks, President Trump emphasized job creation and the importance of Pennsylvania’s vote in the upcoming November election. / Photo by Lily LaRegina 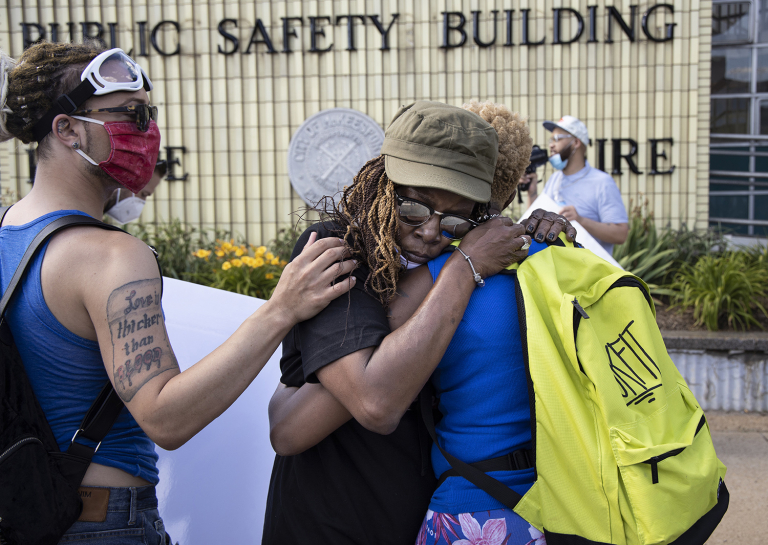 Aaliyah Johnson’s mother, Tonya Reed, 54, of Bellefonte, Pa, embraces Akilah Wallace, 38, of North Versailles Township, in front of the McKeesport Police headquarters during the Justice for Aaliyah Denise Johnson march on Friday, June 12, 2020. Johnson’s death after falling from a ninth story apartment window on May 26 was ruled a suicide, however her friends and family belief her death is due to a different cause based on her history of facing discrimination and harassment for being a black transgender woman. The march, organized by Johnson’s friend Terrance McGeorge of the Hill District, was held to demand a fair investigation of Johnson’s death. / Photo by Lily LaRegina 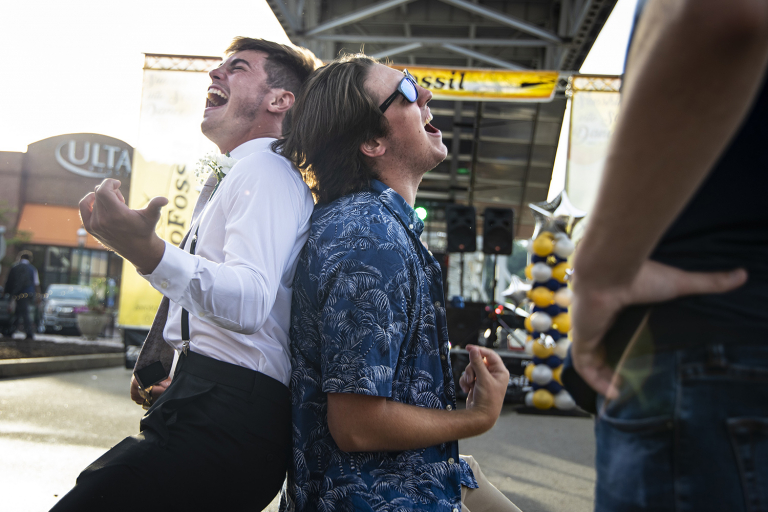 Steel Valley High School students Frank Guzzi, 18, left, and Nick Harhai, 18, play air guitar during prom at the Waterfront Shopping Center on Tuesday, June 23, 2020 in Homestead. One student’s father, Chuck Spicuzza, 45, of Munhall, organized the prom with the help of the shopping center after the school’s prom was cancelled, one of many school events cancelled due to the COVID-19 pandemic. / Photo by Lily LaRegina 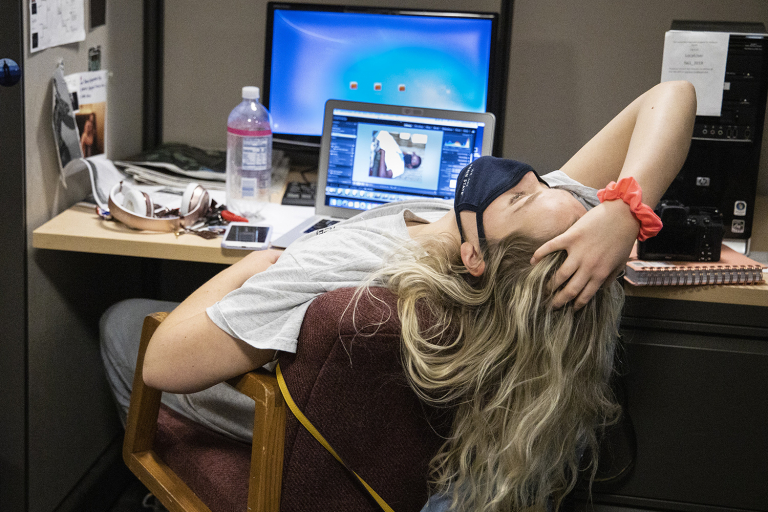 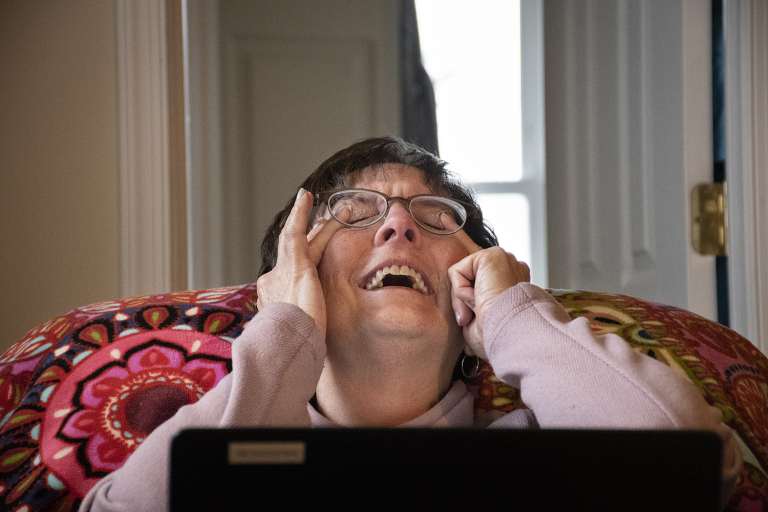 Carol LaRegina cries from laughing during a conversation with her husband Jim in their bedroom while working from home because of the pandemic. “That was my comic relief for the day,” she says. / Photo by Lily LaRegina 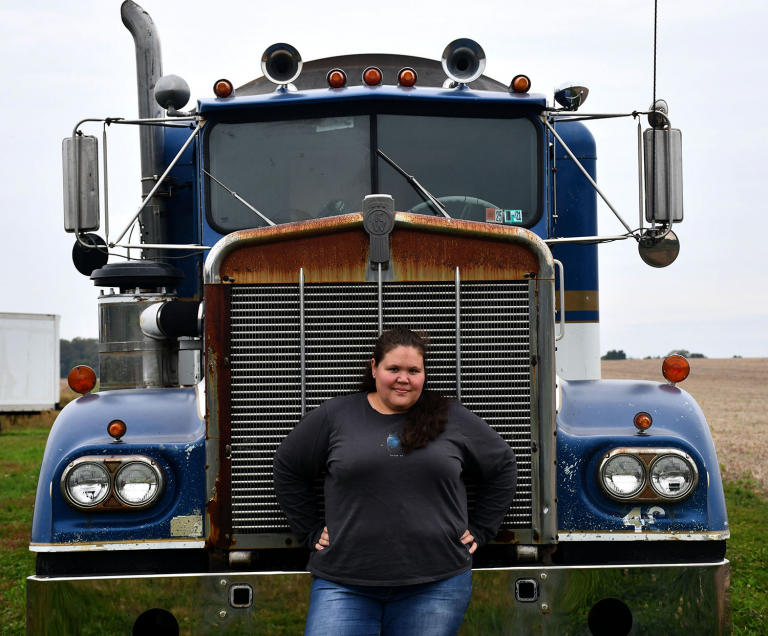 Trisha Walker, a truck driver with A. Duie Pyle, stands in front of her Kenworth truck, awaiting her next load of steel to haul to the steel mill. / Photo by Melissa Harrop 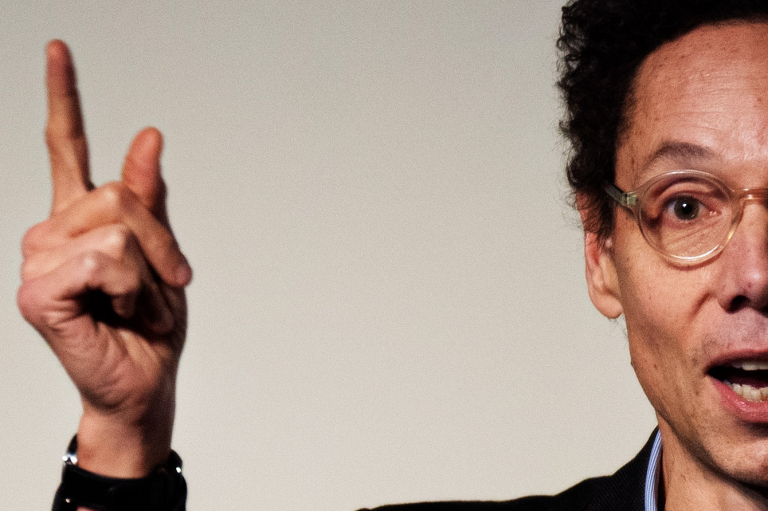 Malcolm Gladwell speaks on Wednesday, Jan. 29, 2020 at The State Theatre in State College, Pa. The lecture was sponsored by The Daily Collegian and the Centre Daily Times. / Photo by Noah Riffe 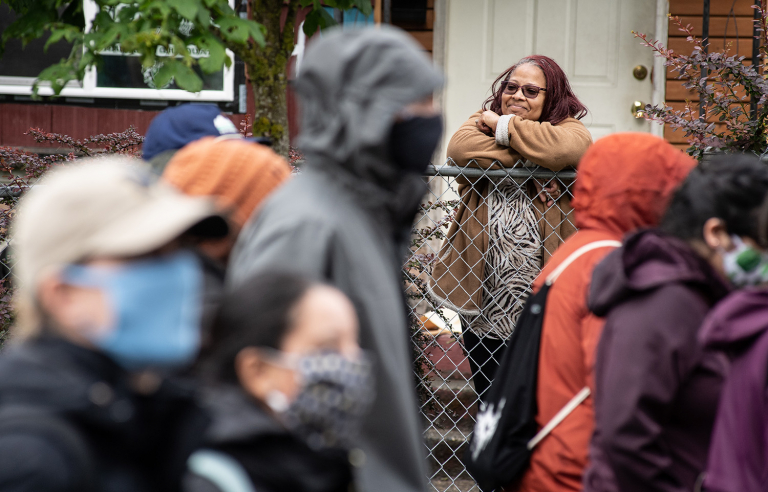 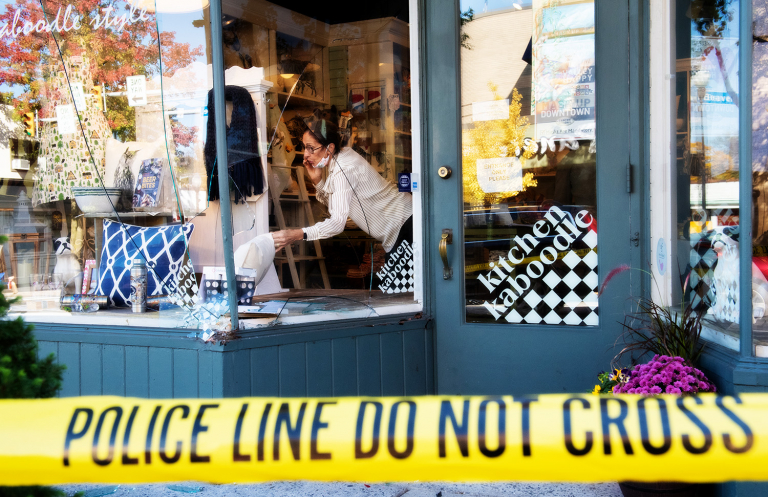 A woman inside of Kitchen Kaboodle begins to clean up the store after a three-vehicle crash occurred on Beaver Avenue that damaged the store on Wednesday, Oct. 14, 2020 in State College, Pa. Three individuals were involved in the incident, one was injured, according to a State College Police officer. / Photo by Noah Riffe 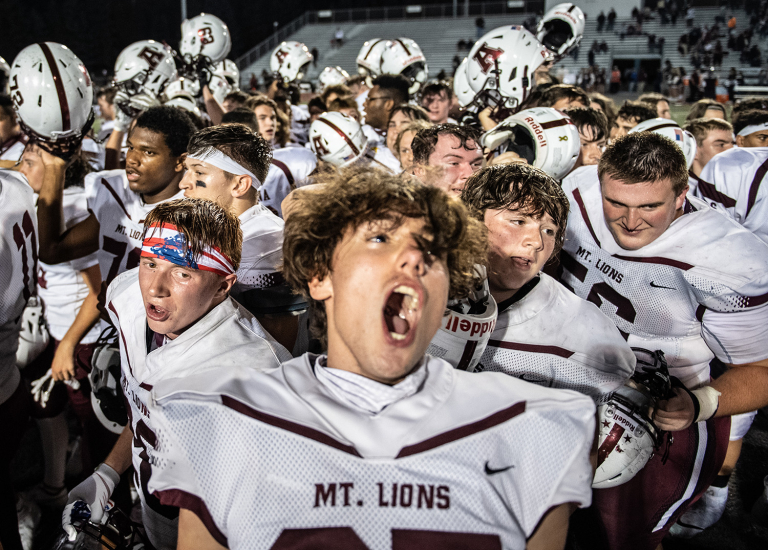 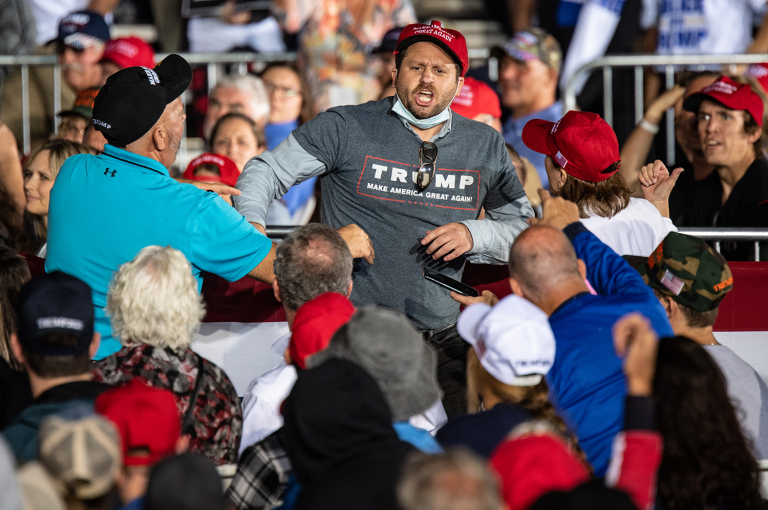 A protester yells as he is pushed by a rally attendee as President Donald Trump spoke to a crowd at the Harrisburg International Airport on Saturday, Sept. 26, 2020, in Harrisburg, Pa. President Trump arrived after holding a ceremony in the Rose Garden nominating Amy Coney Barrett to the Supreme Court. / Photo by Noah Riffe 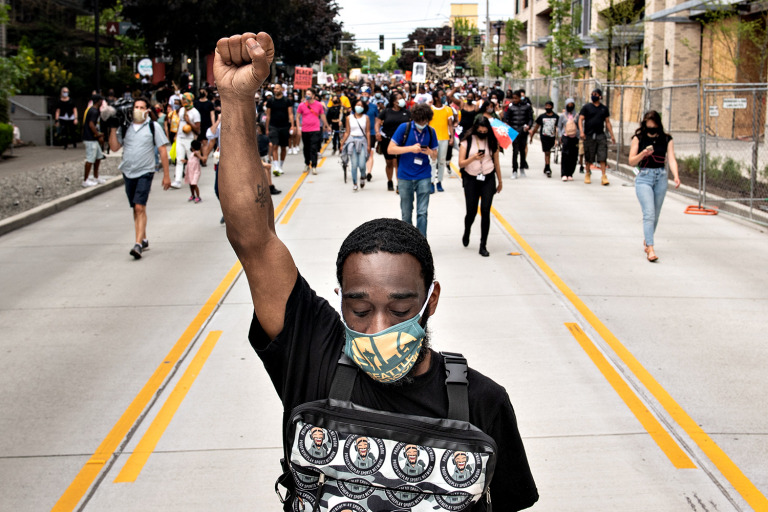 The Freedom March & Celebration, organized by King County Equity Now in Seattle, Washington took place on Juneteenth, a holiday that celebrates the freedom of the slaves in Texas who were freed two years after the Emancipation Proclamation was decreed. / Photo by Noah Riffe 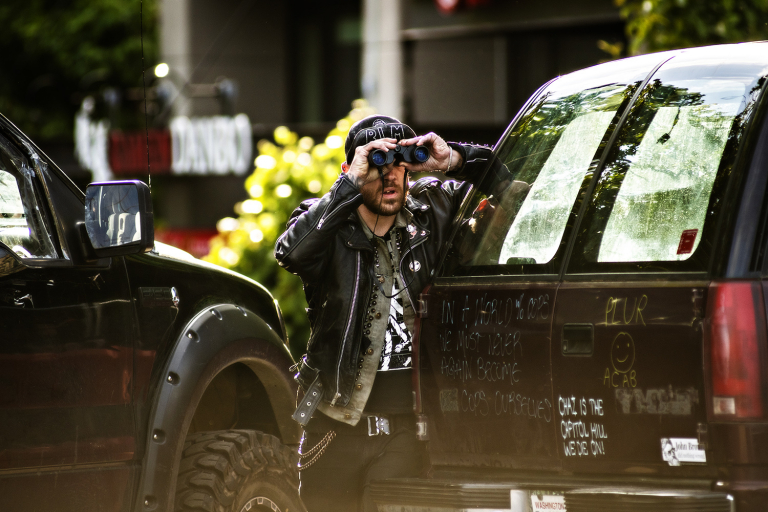 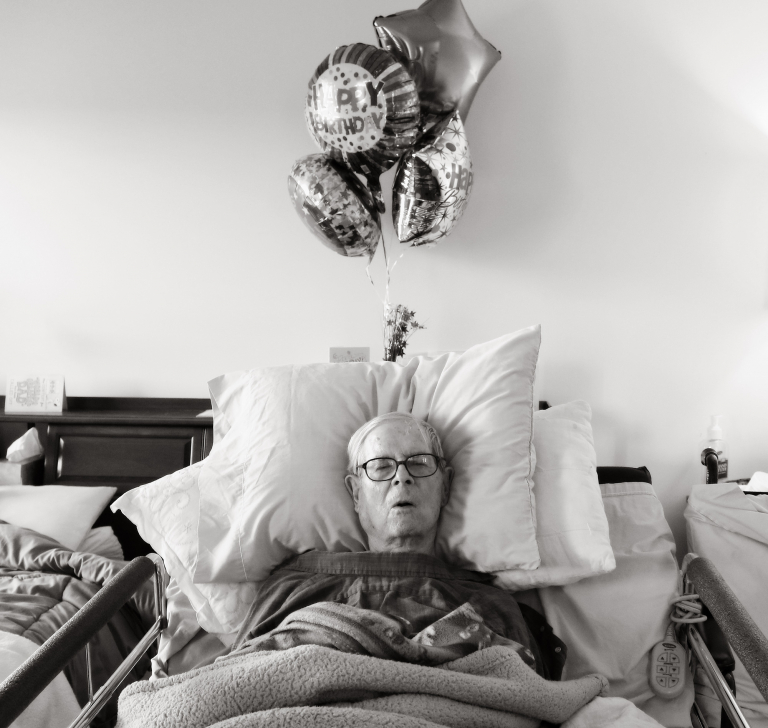 Bob Frantz sings along as his family wishes him a happy birthday over Facetime and in-person on April 11, 2020. While quarantine looks different for many people, for some, like Bob and Nancy Frantz, it looks similar to normal, daily life. / Photo by Lexi Elder 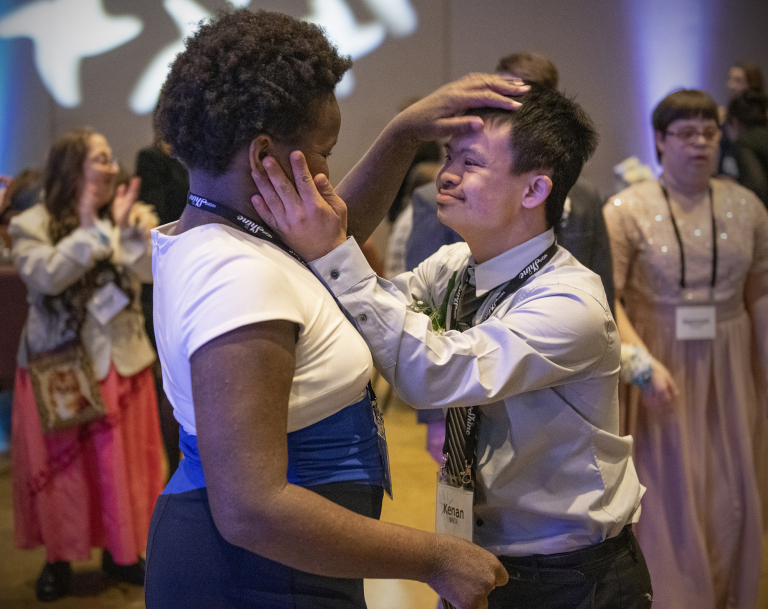 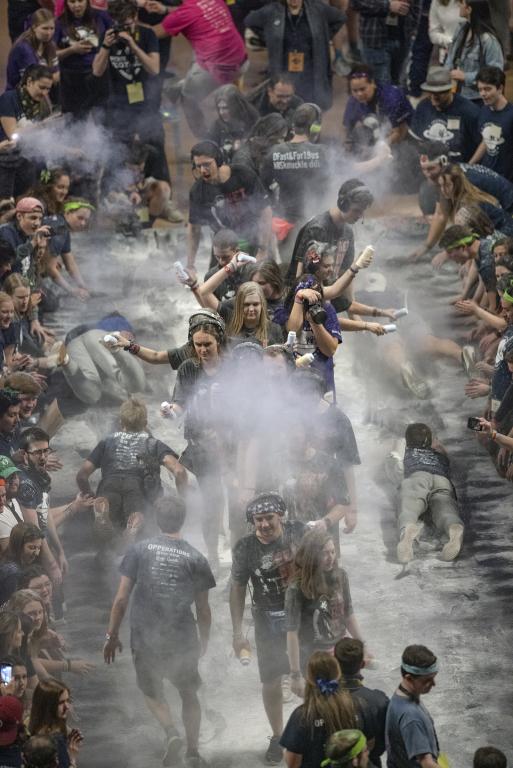 Students participate in the Slides of Strength during THON 2020 at the Bryce Jordan Center at Penn State Feb. 22, 2020. THON, a 46-hour no-sit, no-sleep dance marathon, is believed to be the largest student-run philanthropy in the world. In 2020 THON raised $11.6 million to benefit families of children with pediatric cancer. / Photo by Ken Minamoto 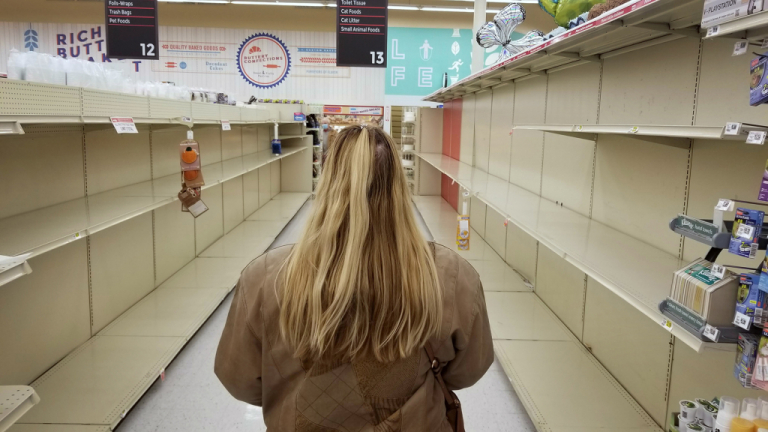 As panic buying left store shelves void of toilet paper and other paper products, Desiree Irvin shops for her elderly mother in Red Lion, Pa, on April 24, 2020. Desiree's mother was quarantined in her home during the COVID-19 pandemic. / Photo by Liz Irvin 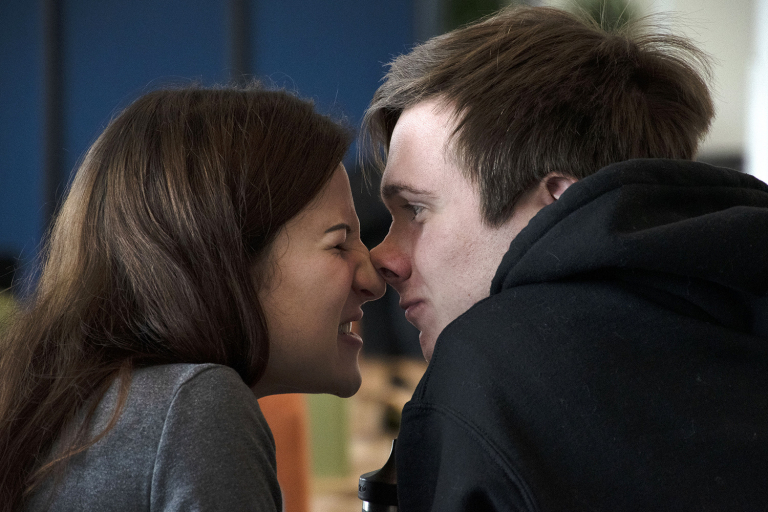 Stephanie Poly, left, and Bailey Klein get up close and personal with each other in the HUB-Robeson Center’s Noontime Lounge on Friday, Feb. 7, 2020. / Photo by Lily LaRegina 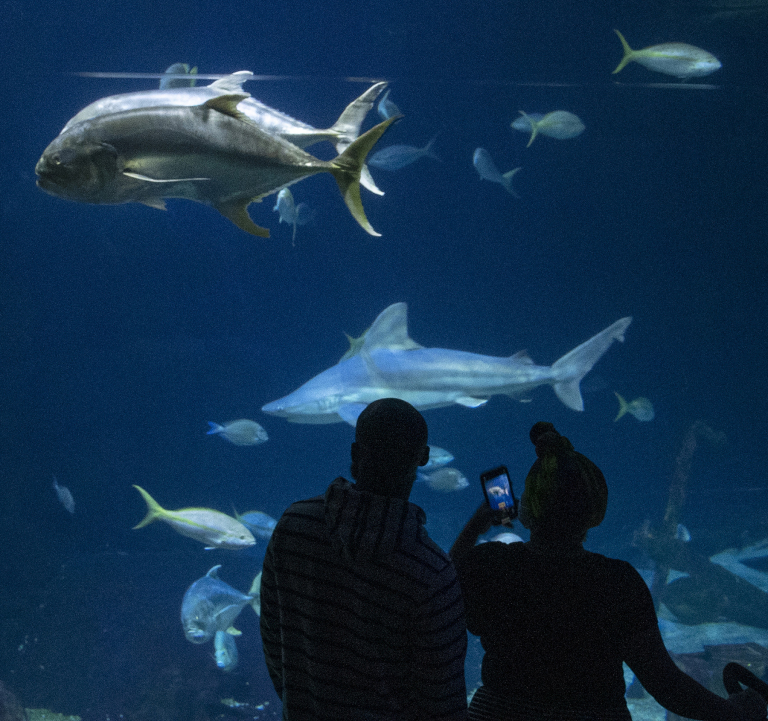 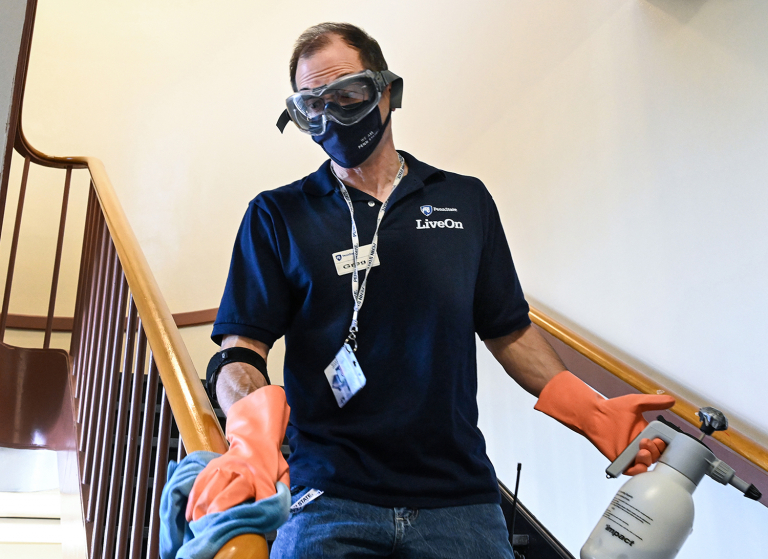 Greg Leitzel, a member of the housing staff at Penn State, sanitizes high-touch surfaces in McElwain Hall on Penn State’s University Park campus. The coronavirus pandemic forced some universities to go completely or partially remote, in hopes of mitigating the spread of the virus. However, Penn State kept its doors- and dorms- open. In order to keep students safe, the housing staffs at Penn State have additional responsibilities to keep the residence halls sanitized and clean. / Photo by Athena Taveras 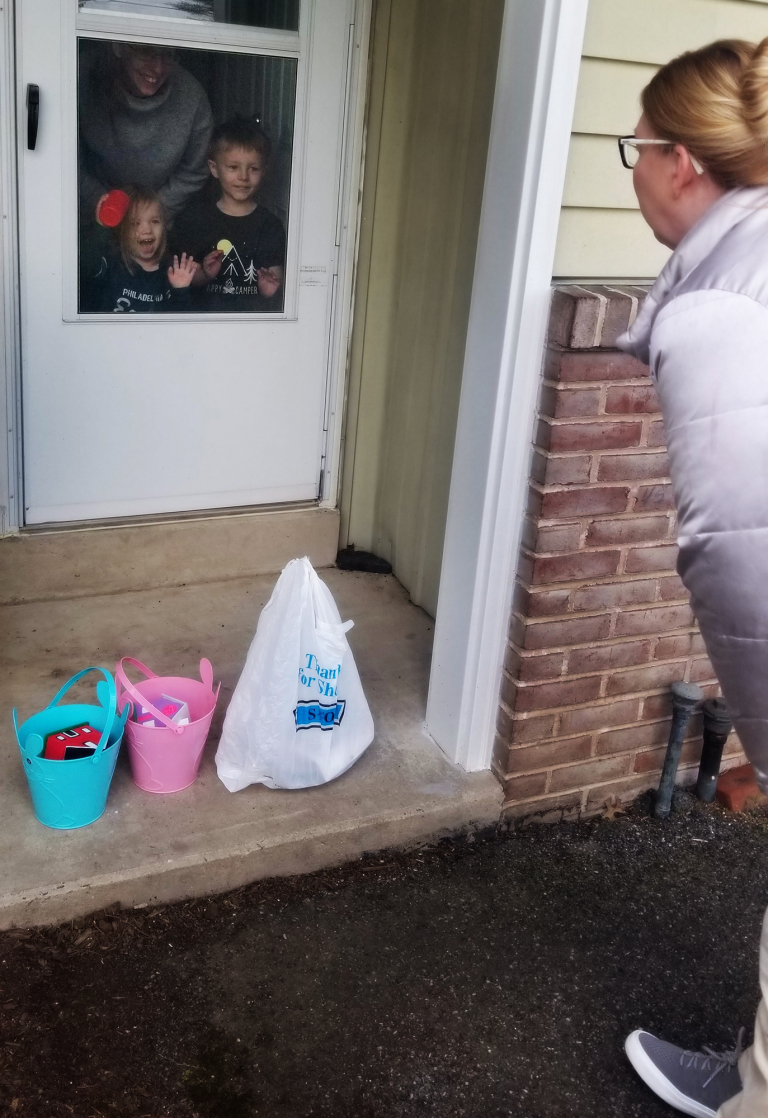 Desiree Irvin doesn’t let a non-essential travel ban stop her from seeing her grandchildren for Easter. Desiree took a quick drive to Lancaster, Pa. to drop off some presents for Tommy and Bella Bresch. Following social distance rules, the two children did not leave the house but instead talked to their grandmother through the screen door of the house. / Photo by Liz Irvin 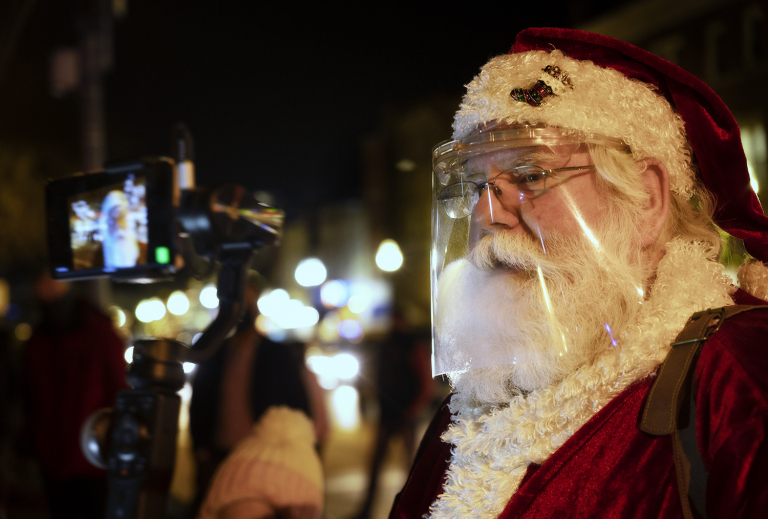 Santa wears a face shield as he talks via a live stream at the Allen Street Gates during the 25th Annual Holiday Tree Lighting ceremony in downtown State College, Pa., on Friday, Nov. 20, 2020. The coronavirus pandemic prevented Santa from meeting with children face-to-face. / Photo by Josie Chen 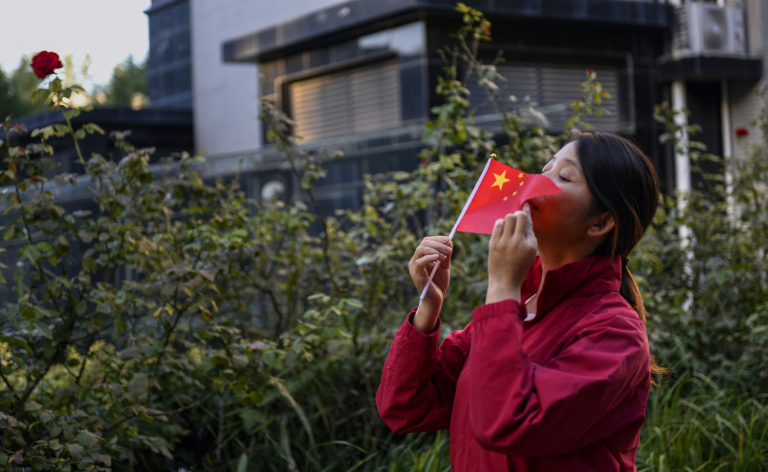 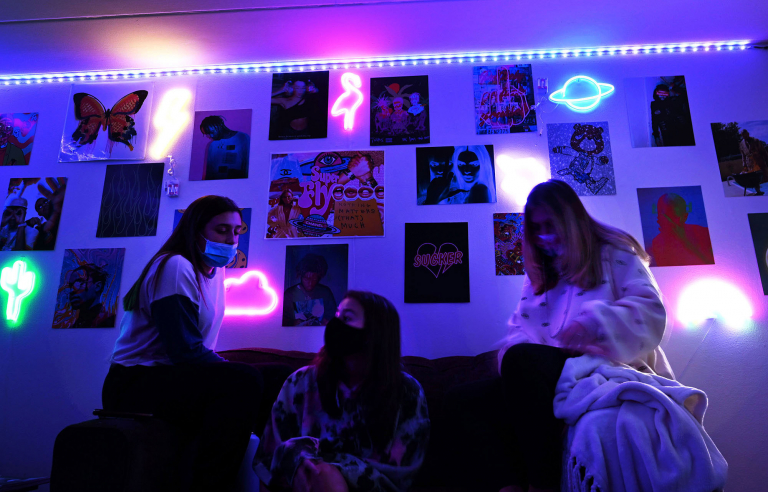 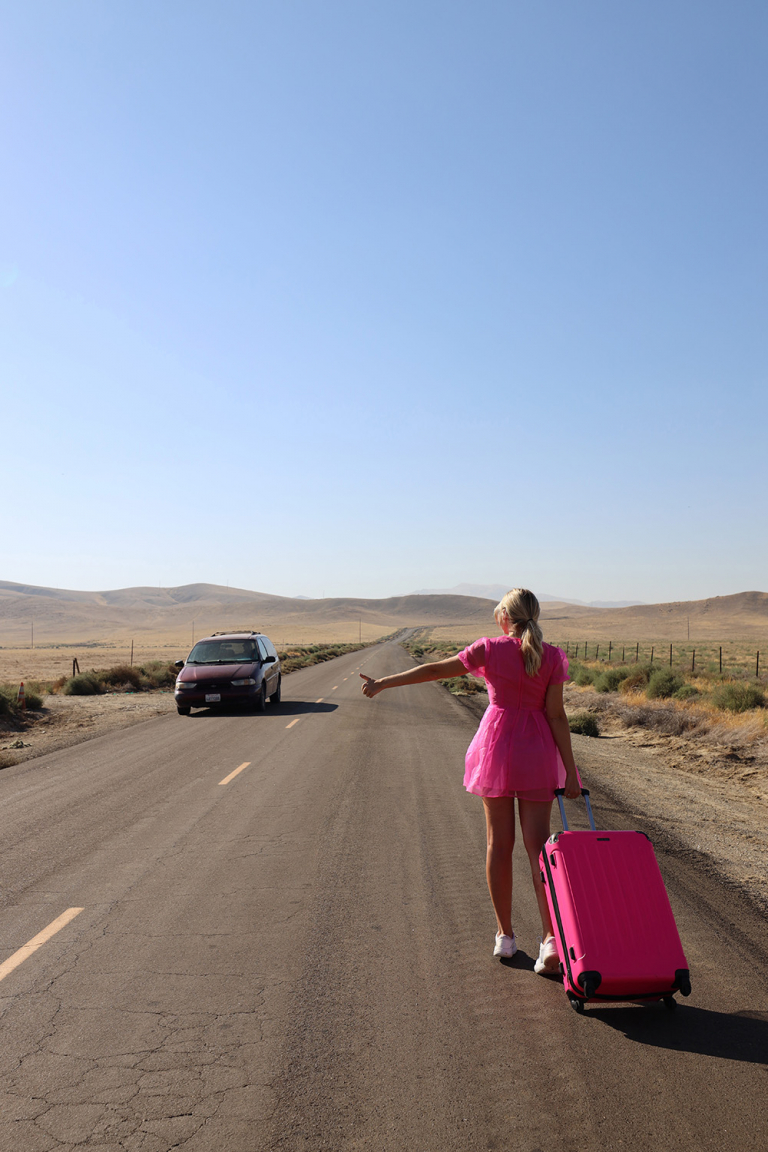