6 Movies That Are So Bad They’re Good

For every good thing, there is something bad. When it comes to the film industry, sometimes a movie can be so bad, the audience can’t help but love it and find entertainment in its lack of quality. In this listicle, the Arts and Entertainment Department take a dive into some of the most horrible films ever put together, but have stayed alive thanks to their cult following. 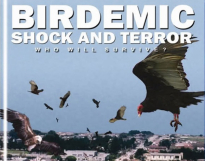 From poor special effects to even poorer acting, “Birdemic: Shock and Terror” is one of the quintessential garbage movies that a large number of people cannot take their eyes away from. Based on Alfred Hitchcock’s 1963 film “The Birds,” “Birdemic” is almost the complete opposite of a Hitchcock picture, lacking suspense, tension and pretty much everything that constitutes good filmmaking.

It would not be an understatement to say that Hitchcock’s version had better special effects too. The birds in the film look like they were edited in by a three-year-old, while there are a number of shots that don’t follow up with the continuity of the previous scene.

Called one of the worst films you’ll ever see by publications such as Variety, Huffington Post and Salon as well as finding itself on Wikipedia’s list of films considered the worst, it’s no wonder why “Birdemic” has amassed a cult following. It’s hacky dialogue, nonsensical plot and acid shooting birds proves that while “Birdemic” may not be a good film, it is an enjoyable one. – Paul Martin 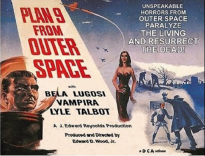 The landmark “trash film” that established the genre, “Plan 9 from Outer Space” will go down as Ed Wood’s terrible magnum opus. Even with an approval rating of 67% on Rotten Tomatoes, a majority of reviews acknowledge that the enjoyable factors of the film lie not in its quality, but rather its ineptitude.

Described as being a movie so bad that its above criticism, “Plan 9” was the movie that really introduced to a large mass of people that terrible films could be just as, if not more, enjoyable to watch than critically acclaimed films. Ranging from terrible special effects, consisting of paper plates acting as flying saucers, to blatant mistakes such as a boom mic somehow finding its way into the picture, goes to show how “Plan 9” was “The Room” before “The Room.”

“Plan 9” was one of a slew of terrible productions overseen by troubled filmmaker Ed Wood and served as the inspiration for the Ed Wood biopic. “Ed Wood,” released in 1994, wound up winning two Academy Awards which just goes to show that a seed of greatness can grow from a heap of garbage. – Paul Martin

Sharknado is the most common movie to be considered a best yet bad movie with a cult following. The terrible graphics and plot seem to draw many people into watching the movie several times.

When watching the movie for the first time, it was very prevalent why people follow the movies religiously. The first thing the audience can notice is the terrible graphics. The sharks do not look realistic. The cuts between the filming of the actors and the graphics were poorly put together. If they had created more realistic water scenes with the sharks, for example, the movie could have seemed more realistic.

The plot is another thing that had you on your toes, oddly enough, but was very repetitive. Towards the end of the movie, the audience would be able to pick up exactly when the gory shark scenes would start up again. Even with the predictable plot and terrible graphics, this movie has audience members coming back for more. Since 2013, five other Sharknado movies had been made and have added to the Sharknado cult following. - Isabella Leahy

Troll 2 is such a bad movie that it ended up being good. Troll 2 isn't a sequel to Troll, so that title can be confusing. The movie was originally supposed to be called Goblins, but they changed the title to capitalize on Troll's success. Another confusing thing about the movie is that the trolls don't even seem to be trolls. They look more like goblins.

Another thing to add to the terrible plot is that these goblins are vegetarians. They try to turn humans into plants in order to eat them. The graphics and special effects were visibly done on an extremely low budget.

The movie's plot is a family that goes on a long vacation to a rural town, Nilbog. There the trolls tried to attack them and turn them into plants. The entire script was also written by director Claudio Fragasso and his wife Rosella Drudi, who barely spoke English. This caused the script to be horribly written since they didn't know the language well.

The cast had also had never acted before, so between lack of experience and the script being terribly written, this movie would be bad from the start. These factors created such a bad movie that would make the audience laugh just because of how terrible it is. That is why it is one of the best bad movies with a cult following. – Isabella Leahy

In 2003, “The Room” was released to the world.  After it was released, it was written off as one of the worst movies ever made.  It was almost destined to be forgotten.  However, it became the go-to picture that audiences flocked to laugh at.

This box office bomb had an estimated budget of $6 million yet, in the few theatres where it was shown, the movie managed to make a meager $1,800 in its initial run; which lasted for only two weeks.

It followed a similar path of “The Rocky Picture Horror Show” by becoming more popular in the realm of midnight cinema in the following years.

Most of the criticism when “The Room” was released was focused on the repetitive dialogue, inconsistent storytelling and poor acting from Johnny’s character in particular, who was played by Tommy Wiseau.  He also served as the director, writer and producer of the film.

Oddly, Wiseau’s unchanging delivery of his lines has become one of the many defining features of the film.

The movie led to the successful book “The Disaster Artist” written by Greg Sestero, who played the character of Mark.  It had a film adaptation starring brothers Dave and James Franco as Sestero and Wiseau and Seth Rogan playing Sandy Schklair, the script supervisor of “The Room.”

For a 2003 flop, “The Room” continues to serve as one of the best examples of that are good because they are bad. – David Myers

The 1958 iteration of “The Blob” was the first to feature the gelatinous flesh-eating creature from outer space. It was enjoyed by audiences, but the same enthusiasm was not shared in the critical reviews.  In their eyes, the dialogue seemed to overpower everything, but they complimented the framing of the small-town setting.

Most of the criticism was aimed primarily at director Irving Yeaworth’s work.  Notable performances included Steve McQueen in his first starting role and Aneta Corsaut, who portrayed the role of his girlfriend.

When it was released, it was paired with “I Married a Monster from Outer Space” in a double feature.  Once “The Blob” was recognized as the more popular movie, it took over as the main event of the program.

Even though the film now has mediocre ratings online, it has a lasting legacy.  It was given a sequel in 1972 called “Beware the Blob” and a remake in 1988 titled “The Blob.”  Phoenixville, Pennsylvania, one of the filming locations, holds an annual “Blobfest.”  One of the main attractions is the recreation of a famous scene from the movie when people run out of the movie theater.

To this day, “The Blob” continues to serve as an inspiration for popular culture ranging from references to characters in modern films. – David Myers

Isabella Leahy is a sophomore majoring in broadcast journalism. To contact her, email iul93@psu.edu.