A passion for art and health 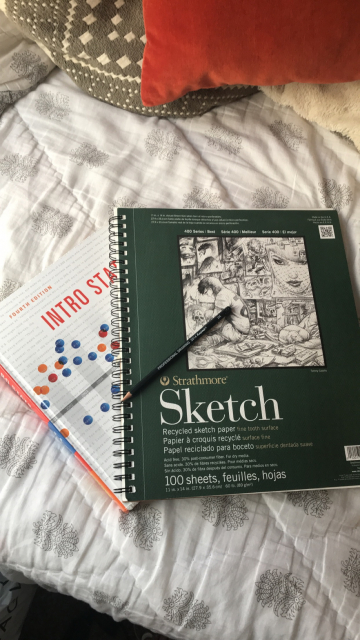 Alexa Parlapiano is a senior at The Pennsylvania State University and plans to graduate this year with a degree in Biobehavioral Health.

She is from Philadelphia, and has a reputation for lighting up a room and making people laugh.

When she was only six months old, her mother took her into the hospital because she noticed that something was wrong.

Parlapiano’s mother was right. She was diagnosed with Thalassemia, a blood disorder where there isn’t enough hemoglobin, the protein that carries oxygen, in your red blood cells.

Due to her condition, Parlapiano gets blood transfusions every three weeks at The Children's Hospital of Philadelphia.

However, when she can't come home to Philadelphia for her visits, she gets her transfusions at the Mount Nittany Medical Center, in State College.

If she doesn’t get a transfusion within a two week time period, she starts to feel sick and her skin will start to become pale. It takes Parlapiano a day to recover from a blood transfusion.

Her condition doesn’t limit her physical activity. In high school, she was a member of the cheerleading team which requires a lot of energy.

Although she has found a love for health, Parlapiano has a love for art and theatre.

She’s been drawing from a young age and tried to progress as she got older. Since she was little, she has been going to plays alongside her mother, and the first broadway show she ever saw was The Lion King.

Taking art classes in high school and drawing to get her mind off of her condition has lead her to have a passion for it as well.

Because she has found a love for both art and health, Parlapiano had to choose a career path as she was going into college.

Being in and out of the hospital frequently helped Parlapiano make up her mind. She says that she wants to give back and that’s why she chose her major, Biobehavioral Health. Video: Choosing a major