Brad Pinkerton is a student at Penn State studying Communication Arts & Sciences. Some people see Pinkerton as a regular college student and some others see him as a hardworking young adult making it in the music industry. He is also a full time rapper, who goes by the stage name BandoBrad.

He has performed on stage and in studio sessions across the Northeast over the past two years. He has even performed in Germany, where Pinkerton said some of the people knew his music.

One of his favorite performances ever, was when he performed in State College midsemester, simply because it was local but he has the most prominent fan base and support in State College. 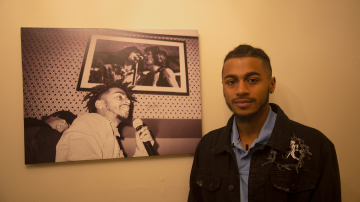 He began rapping mainly to express his enthusiasm for having a good time in life but said he was also inspired by friends and successful rappers in the music industry. He continues to do collaborations with friends and other performers, for example, his song “Revenge,” features him and another rapper named Swaggy Jo, a Penn State grad, and it has hit 10,000 streams already on Spotify. They plan on creating a collaboration tape that will hopefully come out in early 2020. Pinkerton has 11,507 listeners on Spotify and his top locations for listeners are Los Angeles, New York City, Seattle, Chicago, and San Francisco.

Pinkerton has built a name and reputation for himself by using Instagram. His music is on Spotify, Soundcloud and YouTube, to share his music videos and documentaries of his touring. Pinkerton also looks at daily statistics regarding how many plays his songs get, what platforms people are listening to him on, and each day the rates increase.

Pinkerton does most of his promotions on social media but something interesting that Pinkerton said is really helpful is that to promote himself on campus, he has created his own business cards to hand to students and staff.

Musically, Pinkerton said he wants to convey a positive message to his listeners and followers. Pinkerton enjoys when people really indulge in any form of music and just forget about reality for a moment. For example, he said he created the album "Nostalgia," he created the album to reminisce about his successful past experiences and the exceptional moments in life so far.

The creative process for Pinkerton is different than how he performs. He chooses to be alone and lock himself away to create his music rather than be around people. Pinkerton said that he would rather be alone and in a closed-off space to practice and create, but in a studio session to connect the music and the lyrics. The normal studio session for Pinkerton is when he is with a producer and a group of friends. Pinkerton said he always wants to bring some friends so they can have some input during the session.

Pinkerton sometimes struggles to balance school and performing. Sometimes he says he has to set rapping aside to finish his studies and graduate. Pinkerton's next show will be called the “Holiday Jam” Dec. 28 in Lancaster.

Pinkerton says that when he creates music videos he shows the videographers his music and style. Then how they branch off his ideas to create a visual masterpiece. The music video shown here was created by Nik Muller.

NHL Game of the Week: Avalanche vs. Bruins

NFL Game of the Week: Chiefs vs. Bengals

NFL Game of the Week: Dolphins vs. 49ers