Harris's fall severely injured both her foot and leg, forcing her to quit her job life guarding and suspending any other physical activity until the injury healed. During her down time, to avoid going stir crazy she began to play video games and soon learned she had an above average skill in first person shooter games.

Her love of games inspired her to look into a gaming platform called Twitch. According to Techcrunch.com, it is the world’s leading live streaming platform for gamers and it’s a place for people to watch others play video games. She started live streaming on Twitch with the username of Oathxx024 just to remain social during her recovery, but her fan base soon grew because of her skills in the game Halo. At the time Halo was one of the top watched games on the streaming platform, and Harris’ skill and growing fan base soon, and she claims she was the 3rd most watched streamer playing the game at that time. Her followers then convinced her to upload a donation button to her profile and that was when her income with gaming began.

Her ability to interact with fans while simultaneously playing the game well, maintained her fan base and sustained a steady income. After her injury healed up and she was no longer immobile, she began to work again as a lifeguard, but also maintained her schedule with streaming. It didn’t take long to realize that she was making more money streaming than she ever did as a lifeguard and the best financial decision would be to quit her pool job and focus her off time on streaming instead. 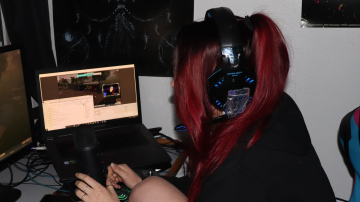 Harris now incorporates her gaming into her strict schedule and treats it as a job. As her only income, she relies on it to pay her bills. She has a strict schedule that she sticks to where she games every Monday, Wednesday, Friday, and Sunday from 6 to 9 p.m. Eastern Standard Time in order to ensure reliability to those that tune into her stream habitually. On her Twitch profile she even goes as far to have a countdown until the next time she will be streaming for any new followers that may stumble upon her page.

The road to her streaming success wasn’t easy. She works hard to maintain her credibility as a female gamer. She shared that when she describes her occupation to others as a live game streamer, many assume that she means “Cam girl.” A “cam girl” in simple terms is just a girl or woman who poses for a webcam. Usually these women use their social skills and good looks to get a fan base, while Harris uses her ability to play games to get her fans. Video games being a male dominated community, makes it hard for people to believe that she uses her skills to draw people in, but she maintains her fanbase with her ability to play games and play them well.

Video: Gaming to Give

Harris doesn’t always collect the money she gets from viewers and Twitch for herself, once a year she coordinates a charity event with other streamers to give to a charitable cause. She has given to causes as broad as charities that help child cancer, and charities that plant trees, and as local as helping someone in her home town with school expenses after his family cut him off for coming out as gay.

I am a two time Donald P. Bellisario Scholarship recipient for my prior service in the Marine Corps as a Meteorologist. I currently intern for CNET and AccuWeather here in state college to help pursue my career in broadcast journalism. My Goal is to be an on air Meteorological Broadcaster after I graduate this year.