Yashodeva Das speaks in riddles. To him, a shadow is like the presence of god, a hand’s silhouette, unable to be seen without a light source. Religion, an implicit relationship, much like a toddler’s inclination to stand and put one foot in front of the other. Service, like two lovers’ addiction to one another, all encompassing and compounding, readily transfused.

Das is a volunteer at Penn State's Pasquerilla Spiritual Center. He goes there each Thursday to practice meditation and spread the message of Bhakti Yoga.

Away from campus Das works at Gita Nagari-- a farm identified in a Google search as being a Hare Krishna-affiliated location. Hare Krishna is often associated with The International Society of Krishna Conciousness, which was founded in America in the 1960s and has been described as a sect-like movement. However, Das says that Bhakti Yoga is the best way to describe he and the farm's religious practice, not Hare Krishna.

"Hare Krishna is a common colloquialism because we mostly chant the Hare Krishna mantra," Das said.

He says Bhakti Yoga is the practice of devotion. It is removed from materialism and ego and separate from the the tension-releasing downward dogs and contemplative cobras of the more popularized Asana yoga.

Das’s default facial expression, doe-eyed and relaxed, is characteristic of someone who is sure of themselves, someone trustworthy. Although he is in his 30s, he has the youthful disposition of a college student, devoid of shelf-like wrinkles that hold the wear of worry. His speech is deliberate, he wears simple garments, and stands upright with confidence.

Das believes that the secularism in the world is still based on the idea of religion, only to be replaced with the deity of the “self,” which imitates the omniscient quality of God.

“There is so much atheism in the world,” Das said, “yet, we all try to be our own gods by trying to control every aspect of the world around us.”

When Das is not volunteering his time at Penn State, he spends his days at Gita Nagari, a slaughter-free dairy farm in Port Royal, Pa, near Lancaster.

Das’s rubber boots, sunken and shellacked in earth, carry the particles of cow hide and the scent of frozen grass with his every step toward the stables. The cows in the barn move at the slow pace that their mass allows, their eyes dark and wet like drizzle spilling from a truffle. They lick Das, getting their tongues caught on his clothes and tightening the skin of his hands with their saliva.

A cow named Monkey sniffs the lens of the camera, creating a wet imprint of curious nostrils. Its gaze is front and center when a human revolves the barn. Fur and friction meet as the herd of cows intuitively tread toward the creamery, where they go to chew grain and release milk.

The farm houses cows and goats, as well as natural visitors like effervescent peacocks and nebulous flocks of starlings. It is also an epicenter for Bhakti Yoga practice. 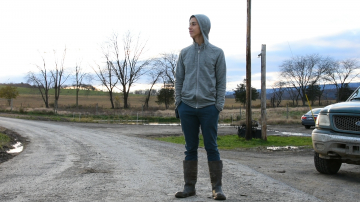 In Bhakti culture, a branch of Hinduism, cows are sacred and preserved. There is a crossover in religion and vegetarian practices in Bhakti Yoga. Das believes that eating meat is a the destruction of the earth’s environment. He encourages a meat free lifestyle.

“It is just a habit, a willful ignorance,” Das said.

Das considers cows to be his family members. He says that cows are nurturing and generous and that being around them influences the same behavior.

The farm is also equipped with a temple for meditation and worship, a dining hall for meatless dinners, and living quarters for monks and Bhakti practicers.

On Thursday night at the Pasquerilla center, an incantation of “hare Krishna” and resonant drum sounds are followed by a silence that transforms like rain to snow, encouraging onlookers to recognize its exponential melodrama.

Kirtan meditation is meditation expressed through music. The pump organ, an accordion-like piano, and the Mridangam, a double sided drum, guide the meditation, along with a mantra that worships Krishna. The meditation held in the Pasquerilla center lasts for an hour, however many Kiran meditations can go well beyond 12 hours.

“I’m not out to score points, I don’t like the word conversion,” Das said, “anyone with an open mind is welcome to join us.”

Yashodeva Das says that, for him, the meditative musical practice of Kirtan is transportative.