Hike Your Own Hike

Luke Hilliard, 23, has struggled with anxiety for several years. To find some direction, he went for a walk in Maine and ended up in Georgia, a hike that took him the length of the Appalachian Trail.

Hilliard started school at Penn State in 2014. Prior to starting his freshman year, he participated in Penn State’s Aurora Orion trip, an orientation backpacking trip where he spent four nights in the backwoods of Centre County. He had always been had an affinity for the outdoors. From a young age, he participated in his local Scouting program, until he aged out at 18.

At Penn State, Hilliard began studying the hard sciences with the intention of going into physics, but his anxiety seemed to get worse. While school had always been the biggest stressor, being in a more rigorous academic setting made his anxiety worse. He started having panic attacks on a regular basis and while he tried to ignore it and push through, he realized he needed to open up to others.

After declaring his major as physics, he continued to feel lost and unable to relate to his classmates or professors. In search of something new, in the spring semester of his sophomore year, he enrolled in RPTM 330: Adventure-Based Program Outdoor Leadership, a prerequisite for becoming an Aurora leader. It was here where he found a sense of belonging with people who Hilliard describes as “crunchy, hippie, hiker trash.” After this realization, Hilliard decided to switch his major to Recreation, Park, and Tourism Management with a focus in Outdoor Recreation.

In the fall of his junior year, Hilliard began classes in his new major and knew he had made the right choice but still struggled with anxiety and panic attacks. Even after taking steps to get better, he still felt emotionally unhealthy. He checked out of school and at the beginning of the spring semester, he dropped out. Unsure if he’d come back or continue a formal education, Hilliard set off to hike the Appalachian Trail (AT).

His parents reacted quite differently. According to Hilliard, his father responded, “Oh, cool!” His mother was nervous. She knew he had been struggling and wanted him as close to home as possible in order to help him. When he would share his plans with her, she would bring up anecdotes and warnings shared from her church friends in an attempt to dissuade Hilliard from his hike. Although Hilliard assured his mother that he was prepared, she continued to worry.

After a while, Hilliard began to hide his plans. He was tired of trying to convince his parents that he knew what he was doing. A few months later, his parents got on board as they wanted to be a part of the process.

Luke Hilliard first decided to hike the world-renowned trail while on a prayer walk. He thought to himself, “I wish I could just drop out and hike the AT” and that is exactly what he did.

The Appalachian Trail is a 2,200 mile footpath that stretches from Mt. Katahdin in Baxter State Park, Maine to Springer Mt. in Amicalola State Park, Georgia. The community of hikers is unlike any other. People come from all over the world to hike this path. Some may be thru hikers who set out to complete the entire hike in under year (the average thru-hike taking 4-6 months) or section hikers who complete the trail in segments over the course of their lifetime. 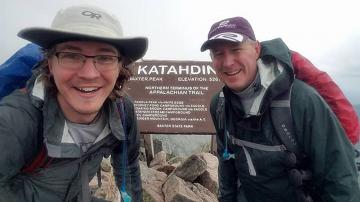 Hilliard was a southbound thru hiker who started his descent with his father, who had driven him up to Maine. After a day or so of hiking around Acadia National Forest, Hilliard and his father summited Mt Katahdin together where he started his journey on June 7th, 2017. The trail took Hilliard approximately 11 months during which he met many colorful characters along the way from the Omelet Man to the Quirin Family.

During this time, he went by the trail name of Pongo. While on the AT, it is common for hikers to shed their birth name and take on a new name and persona on the trail. It is said that the trail gives you your trail name but this is not always true. Some choose their names or change them along the trail based on different occurrences.

Hilliard said he received his name of Pongo because his legs were so bitten up by mosquitos that his legs at one point looked like “bubblewrap.” Once the bites turned dark purple and blue, another hiker pointed out that they looked like spots and thus, Hilliard received his trail name of Pongo after the dog from 101 Dalmatians.

Hilliard would hike approximately 15-20 miles a day. He got to experience all four seasons out on the trail, from the blazing heat to frost. He was out on the trail for three hurricanes, a tropical storm, and one of the earliest and coldest winters that the south had ever seen.

In Virginia, he injured his knee and continued to hike on it for another 300 miles. It was then where he realized he needed to return home to rest it. He finished his through hike on May 5th. He completed the last 200 miles of his hike by flying down to the southern terminus and hiked the remaining mileage with northbounders.

Now back at school, Hilliard is easing back into the academic setting by being a part-time student. He is currently majoring in RPTM and working part-time at his family’s bakery, Dolce Vita Desserts. While he still deals with anxiety, he is happy to report that he has not been plagued with chronic panic attack since his return. Hilliard continues to surround himself with "crunchy, hippie, hiker trash" including his friends from  the Penn State Outing Club, fellow Aurora leaders, Outdoor School counselors, and outdoorsmen alike.

While on the trail, Pongo (Hilliard) wrote a song called "4 By 40 Days," which captures his experience and feelings from his time on the Appalachian Trail.