Penn State senior Sam Reiser hadn’t even gotten home from an 80-day road trip from Mexico to Alaska last summer when he started planning the journey of a lifetime.

Nearly every day of the week, Reiser dedicates hours to renovating an old school bus into a chic and practical tiny home.

Reiser's future house on wheels waits for him 15 minutes from campus on Purdue Mountain Road. Reiser has painted the formerly yellow school bus a clean, shiny white. Most of the interior - save for the driver’s seat - has been completely gutted.

Reiser plans to make the bus more than just “livable;” he also wants it to be an enjoyable space.

Video: The Ideal Tiny Home Should Have Wheels

Sam Reiser describes how he’d like the bus to look and feel once complete. (Spoiler: It involves a rooftop deck.)


Not only does Reiser have to balance his passion project with college classes, but also with being a member of the Track and Field team. On a typical weekday, he wakes up at 5 a.m. and heads to the track to lift and run. From 8 a.m. to 1 p.m., he attends senior-level classes. After that, he returns to the track for a training session until 3 p.m., when he begins work on the bus until the sun goes down. It is a daunting schedule.

“I think everybody puts more time constraints on themselves than they actually realize,” Reiser said. “Especially as a student athlete, I think I’ve realized that. Going to class with kids who aren’t on teams who say they have no time at all – I know that’s not true.”

But if Reiser had all the time in the world, plus unlimited funds, he said he would spend it all on traveling. Not a newbie when it comes to travel, Reiser has been camping since before he could walk. Camping soon turned into hiking, then into backpacking, and then climbing and trail running.

Reiser has been out west four times since his freshman year at college. With each adventure, he says he goal is to push his physical boundaries and time constraints. Last summer, Reiser embarked on an 80-day road trip starting in State College. He traveled west to San Diego, ducked down into Mexico and drove all the way up to the Artic Circle in Alaska, all before coming back to school in the fall. 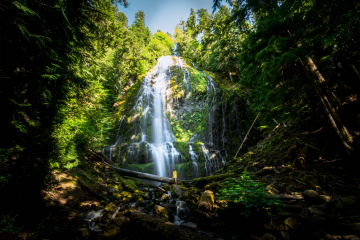 Even more important than embarking on life-changing adventures is sharing those experiences with others. Reiser said he will bring anyone from childhood friends to friendly strangers along with him, as long as they’re up to the challenge. But be warned: these trips aren’t for the faint of heart. He’ll have you scaling mountains.

Of course, he won’t force you up a wall.

“I’ll pretty much take anyone along on one of my trips as long as they will give it a go,” said Reiser. “If they’re at the bottom and look up and they go ‘I just am too scared,’ I’m not going to make them do anything that makes them seriously uncomfortable … But more often not, they’ll see it all the way through and they’ll be searching for bigger and better adventures after that.”

For Reiser, the most rewarding part of taking these journeys with others is helping them push their physical and mental boundaries. Conquering their fear leads to a newfound sense of independence and confidence that the traveler perhaps lacked prior to embarking.

“Through these travels, I’ve been able to show my friends – and strangers along the way – what they’re capable of,” Reiser said.

Travel comes quite naturally to Reiser, but the concept of “home” is complicated. He was born and raised in London, but when his parents separated, he moved to Australia with his mother and stepfather at age eight. At 14, he began attending a private boarding school and has lived away from his parents ever since. 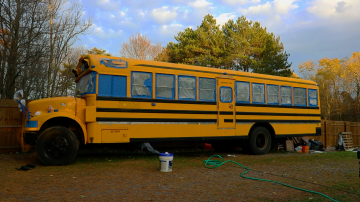 An athletic scholarship eventually brought Reiser to Penn State. But despite his talent and dedication to track and field, he no longer defines himself as an athlete. “There’s so much more going on in my life,” he said.

As ambitious as Reiser's post-graduation plans seem, he still aims to make a stable and comfortable living. As a journalism major and a skilled photographer, he has the possibility of pursuing freelance work. But he’d rather get a stable job out west and save up money for what he describes as a serious, two-year expedition, as well as “micro-adventures” he can take on weekends and holidays.

"If I get a nine to five job, then from five in the afternoon until the sun goes down or after, I have that opportunity to travel and explore local areas," he said. "Then give me a weekend and we'll see how far I can get."

In order to travel west with his bus come graduation, it has to be livable. Adept at maximizing his time, Reiser is confident that it will be. But he’s unsure when it will ever truly be finished.

"The more research I’ve done and the more people I’ve spoken to who have done projects like this, you never stop. There is always a little something to do here and there, and you can always improve your systems. You’ll just constantly be looking after your tiny home,” he said.

Keep tabs on Sam and the bus

Morgan Seiff is a sophomore pursuing a Film degree, with minors in English and Jewish Studies. Her interests include screenwriting and directing. Last summer, Morgan traveled to Krakow, Poland, and Tel Akko, Israel, to capture footage for two in-the-works documentaries about Judaism, history, and archaeology. After graduation, Morgan would like to write and direct narrative films that explore identity and adolescence. Currently, Morgan interns as a production assistant at Palinka Pictures and creates video content for the Underground Student Media. She also serves as the production leader for Kalliope, Penn State’s Literary and Arts Magazine.