Rap with an International Twist


Ibraheem Faiaz is an internationally influenced rapper that is making music that expresses his own originality and creativity drawn from a unique source: his Pakistani and Muslim heritage.

Originally from Brooklyn, NY, now living in State College, Pa., Faiaz says he hopes to add his own international touch to the rap community.

He says that it was around his sophomore year in high school that he got into writing, and later, into making his own music. He would find a beat or vibe he particularly enjoyed and create his own style of music that was applicable to him.

“I’d play my mom’s music that she had, and she threw some rap in there, and I would write their lyrics, and then from there I got into writing,” Faiaz said.

From there, he got into DJ’ing on his computer and adding his own elements to music which eventually lead to him writing his own songs.

Faiaz said that his originality and style are what he wishes to improve on the most.

He takes pride in his music and works very hard on individual tracks and beats. He said that he is sitting on some songs that he has put together, waiting to release at the right time.

“Honestly I don’t feel that any of my projects are ever done,” Faiaz said. “Even if it’s out, I still feel like, oh, I can tweak this or tweak that.”

When going through the process of making a beat, he typically starts out with his keyboard and instruments on his laptop and decides on a melody that he likes. Then, he adds a beat on top including drums, high hats, symbols, and more.

“I’m always trying to critique originality and create my own stamp on my music,” Faiaz said. 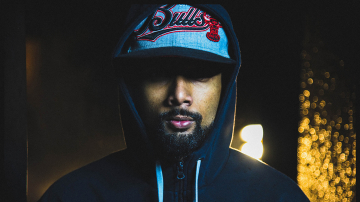 Some of his favorite artists that inspire him today include Jay-Z, Beyoncé, Drake, ScHoolboy Q, and many more.

Drawing inspiration and applying it to his music then letting his own voice shine sets him apart, Faiaz says.

This fusion of rap him cultural influences connects with other artists in the rap genre and sub-genres. Such as The PropheC, from Toronto, Canada.

The PropheC is a Punjabi artist, which Faiaz describes as a sub-genre of South Asian urban music similar to what reggae is for Jamaican culture.

Faiaz said he wants to do similar work with his music by incorporating his Brooklyn background with rap and with his Pakistani influences to make unique music.

Faiaz says that music in Islam is either present or non-present in certain families. He goes on to say that it was his parents’ interest in music that got him into music as well.

Faiaz said that his parents, as well as some of his family, were open to music, with an uncle in the music industry making more traditional Pakistani style music. Faiaz says that music is important to him and he uses it to express himself.

“If I can’t use music to express myself then I’m hiding, and I don’t want to hide." Faiaz said. "So I don’t shy behind music,”

Faiaz says he especially likes performing. He enjoys his Pakistani elements in his life and showing that through his music and performances. He has performed at Temple University and other small venues for people interested in his unique style.

Faiaz said that he sometimes gets nervous in front of a crowd. Once he hears his song playing, the nerves go away. He said that he enjoys surprising people with his music and watching the audience’s curious faces turn excited as they listen.

He said that he uses his music to shine better light on his religion and character. He does not want to convert anyone, he only wishes to give his Muslim religion a better view to those who have negative thoughts about it.

He says that he enjoys being small and personal with his audience as he gets feedback from them and interacts with them.

At Penn State, Faiaz is majoring in health policy administration. He works hard at being a full time student and making music. Despite the pressure he is making true to expressment artistically.

His style of music primarily consists of rap songs, however he is experimenting with new genres and styles. Adding R&B style beats and more lyrical singing such as his song “PAIN.” Moving forward, he says that his style and flows will change as his tastes change with music.

This video was shot by Eric Firestine and edited by Ibraheem Faiaz.

I have done work for The Daily Collegian, and The Curley Center. I hope to work for Sports Illustrated, other sports media outlets, or for a professional team or player taking pictures of their games or lives as athletes. Other interests of mine include concert photography, automotive photography, and lifestyle or freelance work.