The Man Behind the Audio Magic


Curtis Craig is an associate professor of sound design at Penn State University and a freelance sound designer. He primarily works on plays and musicals by writing music and configure the sound system.

Craig transferred from an engineering program to music performance and began his music career as a musician and a singer, thinking he would go into performance. He found his calling when he was asked to mix sound a musical.

Craig also worked in a recording studio in college to leverage his music skills in other ways. After which he transitioned to live production and never looked back at the performance side of things as this still allowed him to play and write music.

Craig took on a variety of jobs doing musicals and plays. After he graduated that continued. He said, “His big break was working for the Dallas Theatre Center.” He met a ton of great people there while working as the Sound Supervisor. Craig followed the job advice of those he was working with to usually have another job lined up. 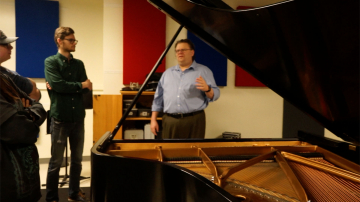 Craig is motivated by the love of teaching and sound designing. However, with sound design he enjoys researching to create a realistic scenario. He calls it being a temporary 'expert' in the era or location of the play. As for teaching, Craig understands that not all students learn the same nor will they work in theatre; however, the belief that theatre is a great training area for those students stand out due to the collaborative and storytelling nature of the theatre.

The rising cost of tickets has made learning on the job much harder and making mistakes on the job are not allowed as much, in an increasingly competitive industry. Craig feels as if he can give back by teaching students the way things are done in the professional industry.

He also teaches because in his professional work he struggled to find people who knew what they were doing. He also knew the change from analog to digital was happening and there would be those not willing to adapt and would get overtaken by those that could apply engineering and science to the job as digital grew.
Craig works long hours, teaching during the day, then working on shows in the evening, with faculty duties scattered in between. He schedules classes around freelance gigs and gives students projects to work on while he is gone. Professionally, he does not see the show until about two days before tech rehearsal but does have communication with folks from the show. This year-round work for him allows him to go to various locations around the world. He has only been to 50 venues for at least a week-long stay.

Once seeing the show, he does any edits needed from his prior ideas to fit into the show. Tech rehearsal usually lasts 4-5 days for 10-12 hours, and it is just him in a theatre the whole time. Improv-ly editing with designers is what is done to make the show a pleasant experience. However, he still comes across a few misconceptions.

Inside the sound design community:


Video: What have you ruined for your students?

Chris Smith is currently a producer for ESPN Radio 1450AM here in State College. Coming from Yorktown, VA, he has an interest in audio as we move to listening to media while doing other things. Chris has interned at Studio Center assisting in creating commercials and voiceover work.