The Most Anticipated Movies of 2021

2021 is looking like a great year for movies due to the combo of films originally planned for this year as well as films that unfortunately got pushed back from their 2020 release dates. In this listicle, the Arts and Entertainment Department takes a quick dive into just four of the more anticipated movies of 2021.

One effect of the COVID-19 virus was the impact on the film industry and how movie studios have gone almost a whole year without theatrical releases, minus a few films like Christopher Nolan’s “Tenet”. A ton of movies got pushed back to 2021, so now fans have a plethora of content to look forward to this year.

Dune is directed by Dennis Villeneuve, written by John Spaihts and Eric Roth; and is filled with the all-star cast of Zendaya, Timothée Chalamat, Rebecca Ferguson, Dave Bautista, Jason Momoa, Josh Brolin, Oscar Isaac, Stellan Skarsgård, and Javier Bardem. Based upon the novel of the same name, this movie is incredibly anticipated as it is known as the world’s best-selling science fiction novel.

Dune is scheduled to be released on Oct. 1st. – Sam Roberts

On March 31st the age-old debate will finally be settled: who would win in a fight Godzilla or King Kong? The movie is the fourth in the Legendary Pictures “MonsterVerse” and serves as a sequel to both “Kong: Skull Island” and “Godzilla: King of the Monsters”.

Following his victory over King Ghidorah, Godzilla has started attacking human cities for seemingly no reason and humanity’s only hope against the king of the monsters lies in King Kong. However, there is more than meets the eye and a human conspiracy may have the answers to Godzilla’s sudden aggression.

The film will star Alexander Skarsgard and Rebecca Hall, and will feature the return of Kyle Chandler, and Millie Bobby Brown as Dr. Mark Russell, and Madison Russell respectively. Yet the real stars of the film are without a doubt Kong and Godzilla.

This is just the second time these monsters have shared the screen together with the first time being in 1962’s “Godzilla vs King Kong”. However, the new movie features an entirely original story.

Fans of giant monster movies and explosive action must be sure to check this movie out because the trailer has shown that this movie will be an absolute thrill ride.  For those looking for the first big action movie of 2021 look no further.

“Godzilla vs. Kong” is scheduled to be released on March 31st. – David Fortunato 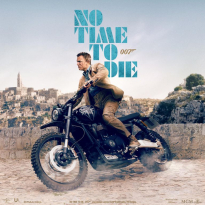 This fall Daniel Craig’s legendary run as British superspy James Bond will come to an end in “No Time to Die”. The film, which will be the 25th in the popular spy series, takes place five years after the events of the previous movie “Spectre”.

Bond has left MI6 but is pulled back into the espionage game by his friend CIA agent Felix Lieter to find a missing scientist and stop an attack that could kill millions. The film will see the return of a variety of actors from Lea Seydoux to Christoph Waltz.

Joining the cast is Rami Malek who plays Lyutsifer Safin, the main villain of the film. Based off the trailers, it seems that he will be James Bond’s toughest enemy yet and bring an explosive conclusion to Craig’s tenure as Bond.

One of the hallmarks of the Daniel Craig James Bond films has been combining explosive set pieces and brutal combat with a sense of realism; and “No Time to Die” seems like it will follow right in those footsteps.  Even though the Bond films have varied in quality, they never cease to provide a true spectacle, and with the talent involved “No Time to Die” looks like it could be one of the best Bond movies yet.

“No Time to Die” is scheduled to release on October 8th. – David Fortunato

Having been delayed due to the Covid-19 pandemic, 2021 should see the release of the much-anticipated Marvel movie: “Black Widow”.

Being one of the original six Avengers in the cinematic universe, many fans had been asking for a Black Widow movie for years now. Being the most mysterious of the originals due to very little knowledge about her past being presented, the characters long-awaited movie installment will hopefully shed some more light on her tragic past as a clandestine operative.

Featuring a handful of new characters, like Yelena Belova, Melina Vostokoff, Red Guardian, and the films supposed antagonist Taskmaster; it is set up to be a thrill ride that pushes Natasha Romanoff back to her past to slay her demons once and for all. Black Widow has been a loved character since her start in “Iron Man 2”, so to finally see a movie with her as the titular character is exciting.

Many fans also speculate that Florence Pugh’s character, Yelena Belova, will become the next Black Widow in the Avengers following Romanoff’s tragic sacrifice in “Avengers: Endgame”. Additional speculations include possible cameos in the form of Iron Man and Captain America. Considering the film is a prequel, and Marvel Studios’ habit of referencing everything within the time frame of each movie, these are fairly strong possibilities.

“Black Widow” is scheduled to release on May 7th. – Colton Pleslusky