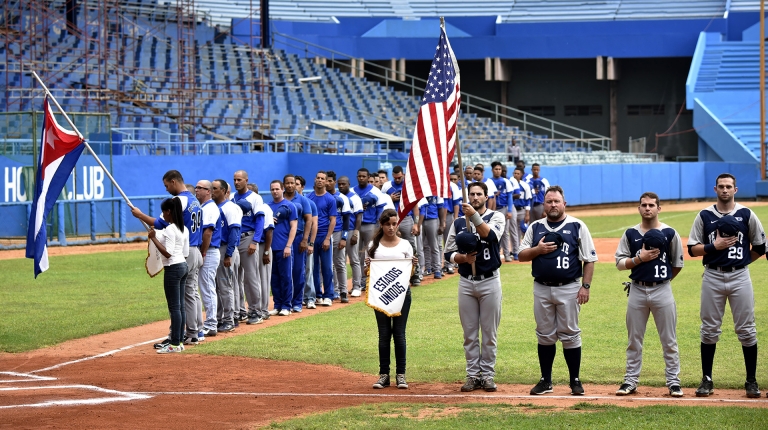 The Penn State baseball team participates in a pregame flag ceremony with Cuba's Industriales before competing in the Latin American Stadium in Havana. Photo by Kelsie Netzer


HAVANA — Once the national anthems were played and the flags put away, one of Cuban baseball’s best clubs, the Industriales, came away with a 2-1 win Monday against a surprisingly competitive Penn State team.

It was just an exhibition game, the first of four the Nittany Lions will play in an unprecedented series against teams from Cuba’s national league, but it also served as a moment to mark the thaw in relations between this island country and the United States.

A young Cuban girl carried a banner reading “Estados Unidos” as she led coach Rob Cooper and his team onto the field at the Estadio Latinoamerica, the most famous ballpark in a nation where baseball is by far the most popular sport.

Junior Christian Helsel carried the U.S. flag as he and his teammates marched along the first baseline. The Industriales joined the Nittany Lions on the third baseline.

Industriales’ fans stood together and sang as their country’s national anthem blared over the stadium’s speakers. Moments later, sounds of “The Star-Spangled Banner” resonated through the stands – a rare event in the half century since the country’s Communist regime took power.

The game was postponed for 24 hours after a downpour Sunday that sent fans running for cover. A light weekday crowd experienced a scare as rain picked up three minutes from first pitch — the exact time the skies opened up a day before.

Monday’s game went ahead despite occasional showers. Cooper and Industriales skipper Javier Mendez swapped lineups, but the exchange felt like more than the trading of scorecards. The managers shook hands and Cooper left the home plate meeting with an Industriales jersey.

“It was cool to hear their national anthem and see the Cubans pride for their country,”

Cooper said. “But anytime you hear our national anthem in another country, it is a different feeling. It was a very special moment to be a part of.”

With Major League Baseball and the Cuban government talking about bringing MLB to Cuba next spring, Industriales captain Carlos Taberes said the Penn State game might be a taste of things to come. “In the future, events like this will be more serious,” he said.

“With diplomatic relations improving, I think we will have more games like today.” 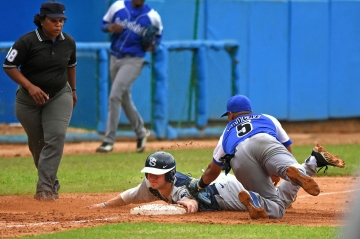 Penn State right fielder Jordan Bowersox (13) slides safely into third base after he hit a double on the previous play in the third inning. Photo by Cameron Hart

Playing with a squad filled out by under-23 players – eight Industriales went with the Cuban national team to a recent global baseball tournament – the home team found the scoreboard in their first at bat. Hasuan Vierra drew a walk from Taylor Lehman to lead off the first inning and one batter later, Taberes singled.

Vierra stole third and scored on a sacrifice fly from Andres Hernandez, giving the Industriales a 1-0 lead. Tabres scored the second run of the inning after Wilfred Aroche reached base on an error by Penn State second baseman Conlin Hughes. The Nittany Lions found their way out of the inning on a diving catch by center fielder Austin Riggins.

Lehman left the game after four innings, with three hits, two runs, a walk and two strikeouts. Nick Distasio came on to relieve Lehman and went the distance for the Nittany Lions.

Ian Rendon started the game for the Blue Lions and pitched two innings with two walks and a strikeout.

Signs of baseball in Cuba shined through in the fifth inning, when the umpires – one of whom was female – enjoyed a traditional midgame water and Cuban coffee break.

The Nittany Lions found the scoreboard in the seventh inning on a RBI single from Riggins that scored Nick Riotto. As Riotto rounded third to score the Nittany Lions’ sole run, he took a long glance back at the outfield.

“It was an honor to score the first run in Cuba,” Riotto said. “We are in another country with a language barrier and everything is different, but to come out here and it just be baseball is not something we expected.”

The Nittany Lions looked like they might pull ahead in the eighth inning, but freshman Willie Burger grounded out in a double play that stranded Jim Haley and Tyler Kendall. Alex Malinsky reached base with two outs in the ninth, but Hughes struck out swinging to record the game’s final out.

At the end of the game, Cooper popped out of the dugout and clapped for the Industriales. His players and the crowd joined in, and the two sides posed for photos at home plate.

“It’s a once in a lifetime opportunity to play against the Industriales in Cuba,” Cooper said. “To play hard and compete against a team like that is just a great thing.”

Reaction after Game One in Cuba.