Story/Video posted December 9, 2019 in Best of CommMedia by Matt Lingerman.

It started with a squat.

Kyle Massari, was in the gym with the rest of his hockey team. It was August 2016, and the 17-year-old was about to begin his senior year at Holy Ghost Prep in Bensalem, Pennsylvania.

His high school team was coming off its first ever PIAA state championship the year prior, and Massari, who was a first-liner as a junior, was poised to be named captain for his final season. Massari, a Trevose, Pennsylvania resident, had also just joined a premier club team as he considered his prospects as a hockey player beyond high school. 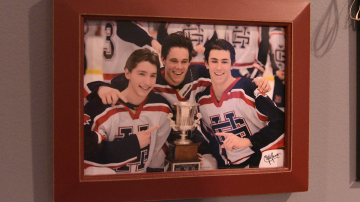 But as he went to stand up from his squat on that day, Massari found his body wasn’t cooperating. His left leg seemingly had no strength, and he lost his balance.

Massari, now 21, figured he had merely overworked in training over the prior weeks and thought nothing of it. But the issues persisted.

“A few weeks later, I was at a week-long camp with my club team,” Massari said. “First day, I went out on the ice and it still wasn’t right. I was falling all over the place. It was like nothing I’ve ever felt before.”

The numbness in Massari’s left leg hadn’t gone away, and his coordination was growing worse. Plus, his lower back had some pain. He knew the strange feeling hadn’t stemmed from a hit, because he hadn’t played in a game since the spring and the practices he’d participated in were non-contact.

Unsure of the cause, his coaches sent him to be examined by the team medical staff. The trainers recommended a second opinion, so his mother took him to St. Mary Medical Center, where he was given an MRI on his lower back.

That’s where the pain was coming from, but the scans came back clean.

As the school year and season inched closer, his condition wasn’t improving, and no one knew why.

Finally, just as classes at Holy Ghost began, Massari went to the Children’s Hospital of Philadelphia (CHOP), where doctors conducted an MRI on his full back.

“Before I was even done the scan, probably a half-hour before I was out they knew what it was,” Massari said. “They had already told my mom and then they told me.”

On his upper back, between his shoulder blades, Massari had a tumor on his spine that would require a dangerous surgery.

“It was really hard,” Massari said. “It was my senior year of hockey, and I wanted to take off and really excel… I wasn’t really thinking about anything else.”

The surgery was immediately scheduled for a week after the MRI. After some more testing Massari was sent home to rest before he went under the knife in mid-September.

The plan for the operation consisted of making an incision vertically down Massari’s back, between his shoulder blades, slicing into the spinal cord, removing the tumor and inserting metal rods in place of the bone that the surgeon had to remove to extract the tumor.

After six hours of surgery, most of that plan had been carried out, and Massari was stitched up. But the doctors were unsure of whether they removed all of the tumor, so the next day they went back in for another check.

After two days and 14 total hours of surgery, the doctors decided they had removed all they could via surgery. They told Massari he would likely be up and moving within a few days, but that wasn’t the case.

“I couldn’t move or feel my legs for the first week after surgery,” Massari said. “So that was a little scary. Not being able to move at all for the first time in your life is really hard. Sitting around for a week which turned into a month was pretty hard.”

Although tests showed the tumor to be benign, it became apparent he was going to have to re-learn how to walk as he gradually regained feeling and control of his legs. He was sent to the rehab unit of CHOP, where physical therapists put him through exercises to help him do just that.

His left ankle was the joint that gave him the most issues, so he wore a brace on it to keep it steady as he worked up from using a walker, to a crutch until finally he was able to walk on his own.

But while walking under his own power again was a milestone, it wasn’t the final goal. Massari wanted to skate.

In October, a little over a month after his surgery, Massari was able to return to school and was named captain of Holy Ghost’s hockey team. He continued trips to CHOP for rehab and a few rounds of radiation to completely rid his spine of the tumor and was able to spend time around the team in the locker room.

The opportunity for that came in late February, as Holy Ghost prepared to play its final game of the regular season. It was the annual senior night, and Massari was going to be in the lineup.

“It was definitely a little emotional, because you know people are coming to see you,” Massari said. “It’s not usually like that. It felt really good, but it was also a little scary.”

Massari’s suspicion that the crowd had its eyes on him was confirmed when he received the loudest ovation when his name was announced pregame.

The game, for Massari, wasn’t a normal one. Players flew around him as he had to look down at his skates to make sure he was moving his legs correctly. And Massari admits playing a lick of defense was out of the question, so he hung around the offensive blue line for the majority of his shifts.

But then the moment came. On one of his final shifts, he and fellow senior Marko Bohatiuk found themselves on a 2-on-1 break. Bohatiuk dished a puck from the left circle to Massari in the low slot and he buried the puck over the goaltender’s left shoulder.

Though Holy Ghost already had the game well in hand, the crowd erupted. His teammates streamed off the bench to mob their captain in the corner.

To make the goal even more special, Massari’s father, Matt Massari, was a coach for Holy Ghost’s junior varsity team and was invited to stand behind the bench for his son’s senior night game.

“Scoring that goal and coming off the ice, the first person I hugged was [my dad],” Massari said as he held back tears. “It was like nothing I’ve ever really experienced before.”

“Definitely the most emotional goal I’ve ever scored.”

Because doctors were initially unsure of whether the tumor on Massari’s spine was cancerous, he was placed on the Children’s Hospital of Philadelphia’s oncology floor.


That meant that, as a 17-year-old, Massari was surrounded by patients, the majority of whom much younger than him, who were struggling with illnesses far worse than his.

As Massari worked to learn how to walk again, part of his rehab involved walking around the oncology floor and smiling at the young children who had been diagnosed with cancer. Though it saddened Massari, it also gave him a new way of looking at his own condition.

“I knew my surgery sucked,” Massari said. “But being on the oncology floor gave me perspective, because I knew I was gonna be all right, and not all of the other kids did.”