Video posted April 28, 2014 in Best of CommMedia by Ashley Hernandez.

As the night starts to come to an end and the streets of State College are filled with people walking back from an evening out on the town, Ken’s Best Wurst seems to be their destination before heading home.The line was 40 people deep on a recent Thursday night.

To some Penn State students, he is just a guy who sells hot dogs outside “The Den”, but to his regulars Ken Baumgarten has managed to acquire State College celebrity status with a reputation for being a great person.

Baumgarten is the owner of Ken’s Best Wurst, a hot dog stand he operates in the parking lot behind “The Lion’s Den” every Tuesday, Thursday, Friday and Saturday from 10 p.m. to 3 a.m.  He sells hot dogs, Italian sausages, chips and drinks. 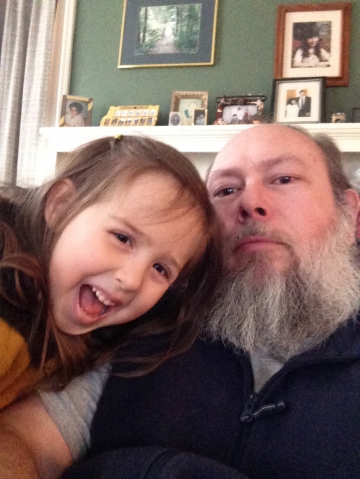 Originally from New York City, Baumgarten and his family moved from Maine to Philipsburg, Pa. to be closer to his daughter and grandchild, Leah. One of the reasons why he appreciates his job is because it gives him the flexibility to make up his own hours and spend most of the day with his kids.

Baumgarten had had the idea to enter the hotdog business at normal hours, but the best advice he had came from his daughter when he told him there was a niche market to be filled in the late night food business. After three years of being in the business, he has created a good name for himself.

He has been featured in many stories around campus, the most recent being an article from Onward State, “409 Things I’ll Teach My Future Penn State Son.” Baumgarten is at number 246, which says, “Ken the Hot Dog Guy is awesome and one of the nicest guys in town.”

Working into the wee hours of the morning, Baumgarten has been able to interact with students in ways other vendors cannot even imagine. He understands who his target market is and started using social media to communicate more effectively with them.

Baumgarten, who has a degree in Ancient Greek and describes himself as a words man, was not keen to the idea of Twitter, even calling it “an active affront to good communication”. Nevertheless, he has become very present on this social media site since he believes it is important to build relationships with customers.

He Tweets to let his customers know about the specials, like the dollar discount word of the day and now he has more than 500 followers on Twitter.

There are future plans to expand Ken’s Best Wurst by either adding another location or changing from a cart to a food truck for more variety. Baumgarten is weighing his options and making sure the service aspect does not change. In the mean time, he will continue serving “outside The Den” to all the night owls in State College and collecting the “drunk tax”, as he would say.

Baumgarten says one of his saddest days on the job ended up becoming a good memory.

Born in Acapulco, Mexico, Ashley Hernandez has always been interested in the field of Communication. She was a host of a TV show called RTG Kids, which is how she became passionate about Broadcast Journalism. Ashley’s other strong interest is culture, that is why she decided to study abroad in Barcelona, Spain her junior year of college.
On her free time, Ashley enjoys dancing and planning future trips that she hopes might happen soon. Her goal after graduation is to go back to Europe and work in International Communications where she can use her Spanish and English speaking skills in her everyday life.