Photo posted April 28, 2018 in Best of CommMedia by Commedia. 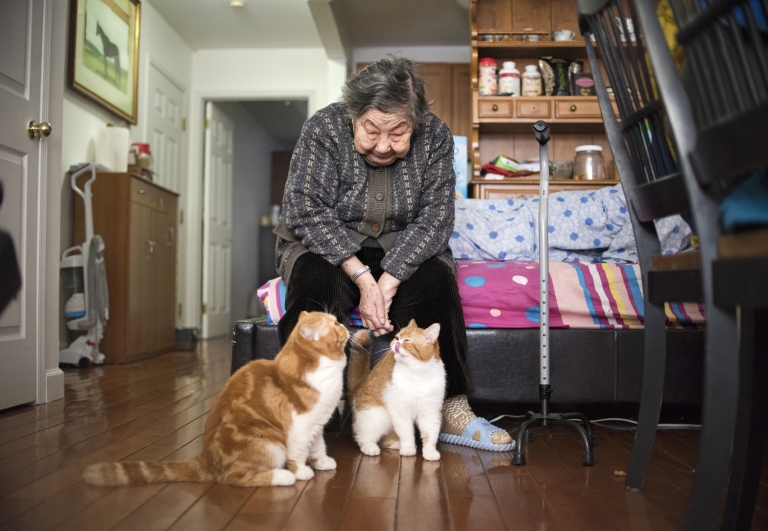 Meiying Dong, 94, came to the United States 21 years ago to care for her daughter and newborn grandsons. She now lives with family members and her cats in an apartment in Queens, New York. / Photo by Anqi Wang 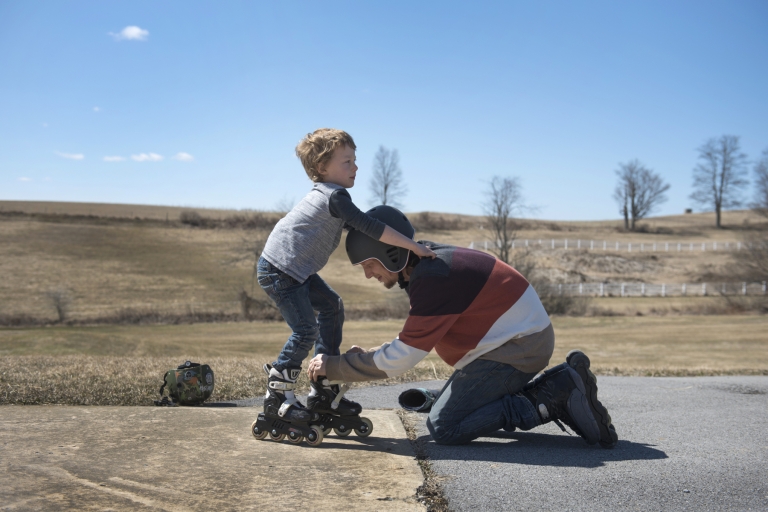 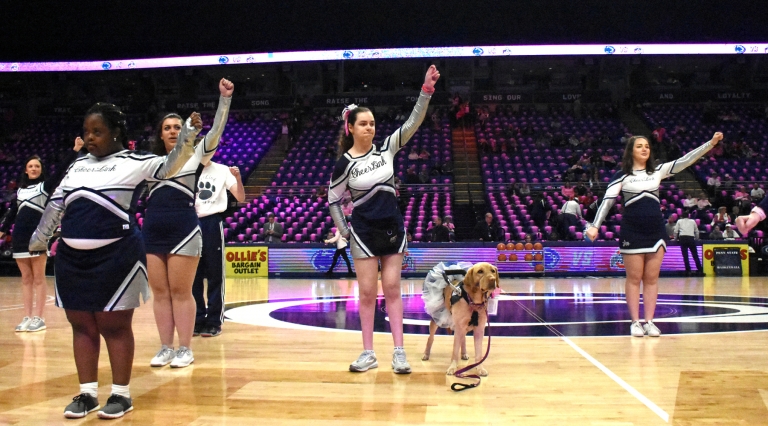 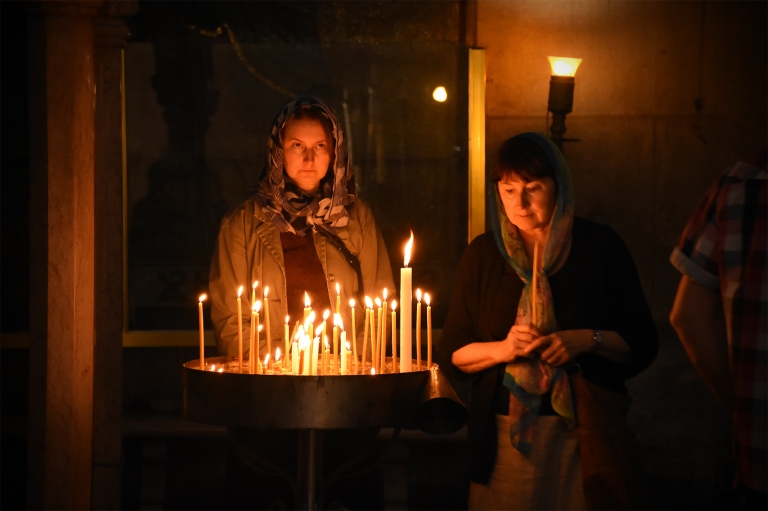 Worshipers stand with votive candles at the Church of the Holy Sepulchre in Jerusalem. The church is built on what's believed to be the site of the tomb of Jesus. / Photo by Giana Han 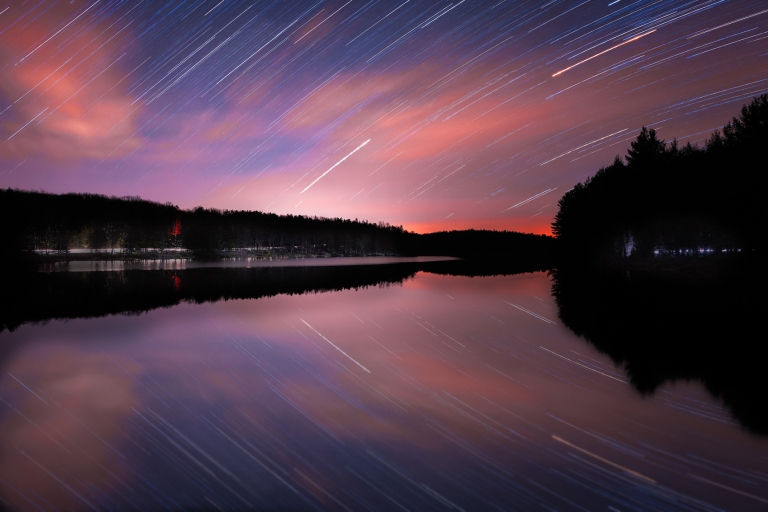 Multiple 30-minute exposures made before dawn on Earth Day, Sunday, April 22, 2018 capture the Lyra meteor shower in Black Moshannon State Park in Pa. Meteor showers may produce between 15 and 100 meteors per hour, according to Joe Rao, of space.com. / Photo by Yutong Zhou 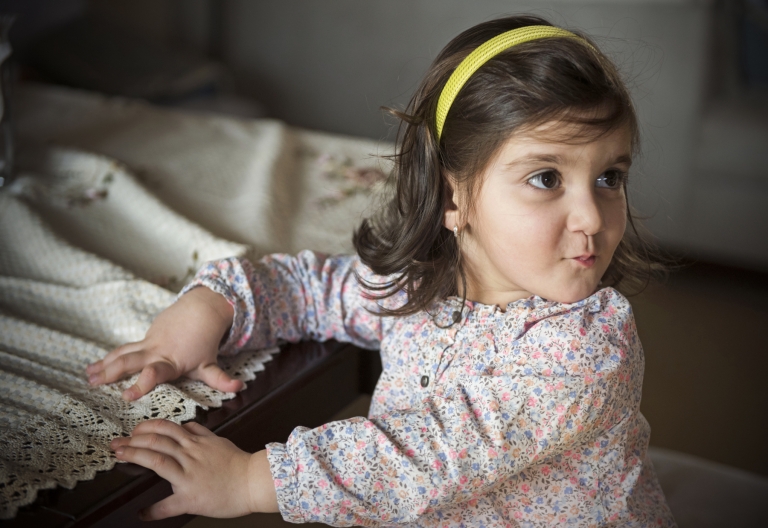 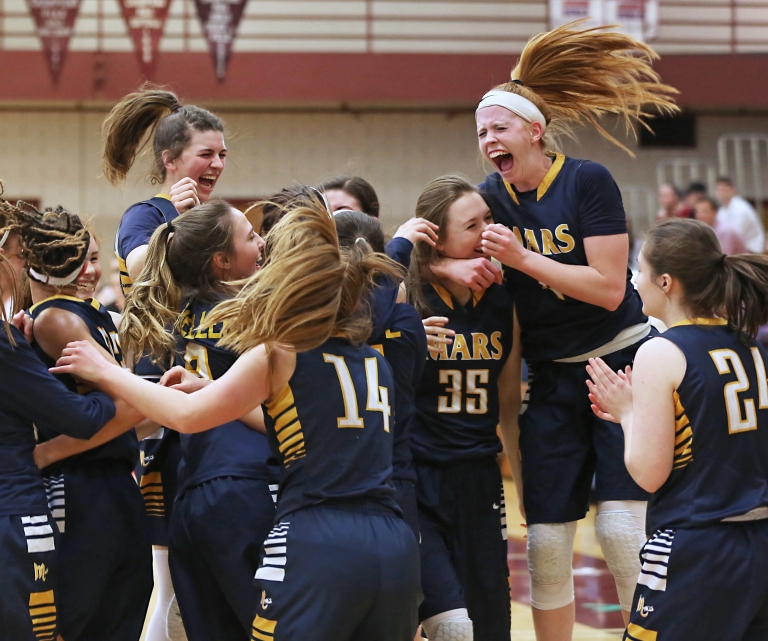 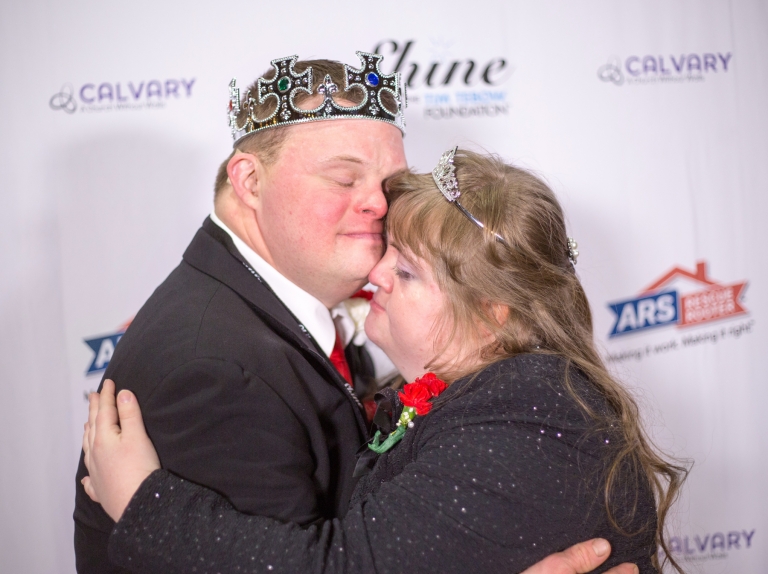 Matt Porter and his girlfriend, Brooke Fisher embrace at the Night To Shine prom at Calvary Harvest Fields in Boalsburg, Pa. / Photo by Georgianna DeCarmine 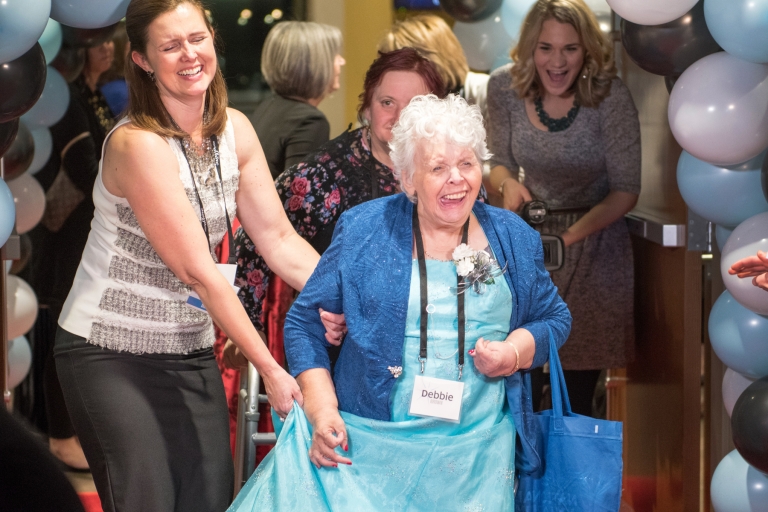 Cristina Houtz. left and Debbie Brown make a grand entrance at the "Night To Shine, "a prom for people with special needs, at Calvary Harvest Fields in Boalsburg, Pa. / Photo by Anqi Wang 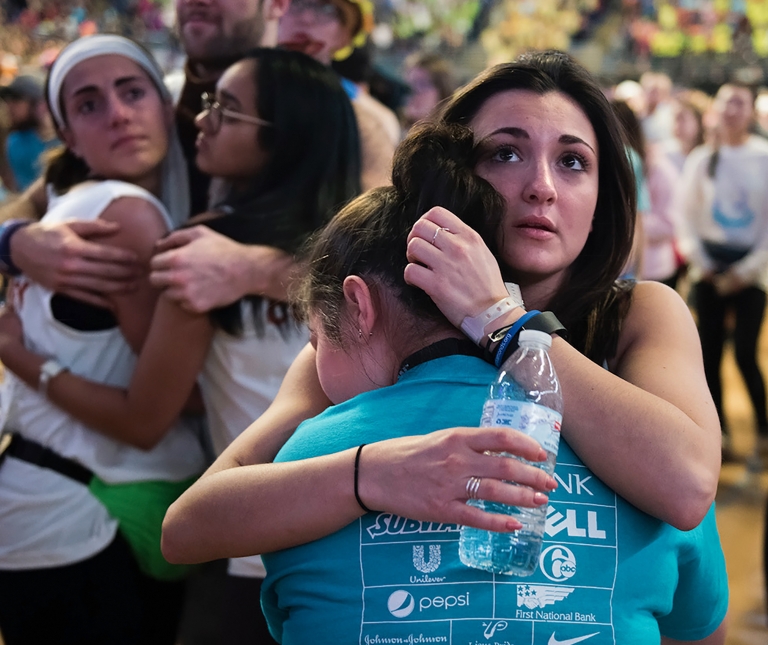 THON dancer Laura McGovern, facing camera, representing Pi Beta Phi, comforts a friend as children who lost their battle to cancer are remembered in the final hours of THON. THON is the largest student-run philanthropy in the world, raising money for families affected by pediatric cancer. / Photo by Maddie Almer 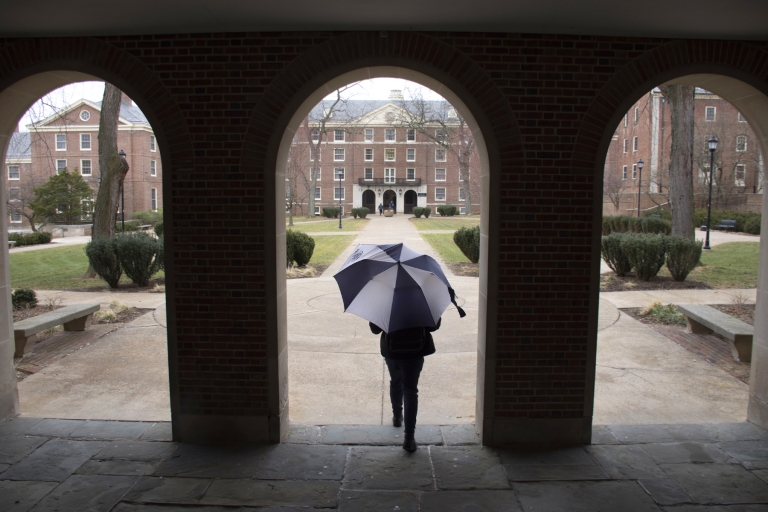 A Penn State student walks through the West Halls courtyard on a rainy day in University Park, Pa. / Photo by Sydney Herdle 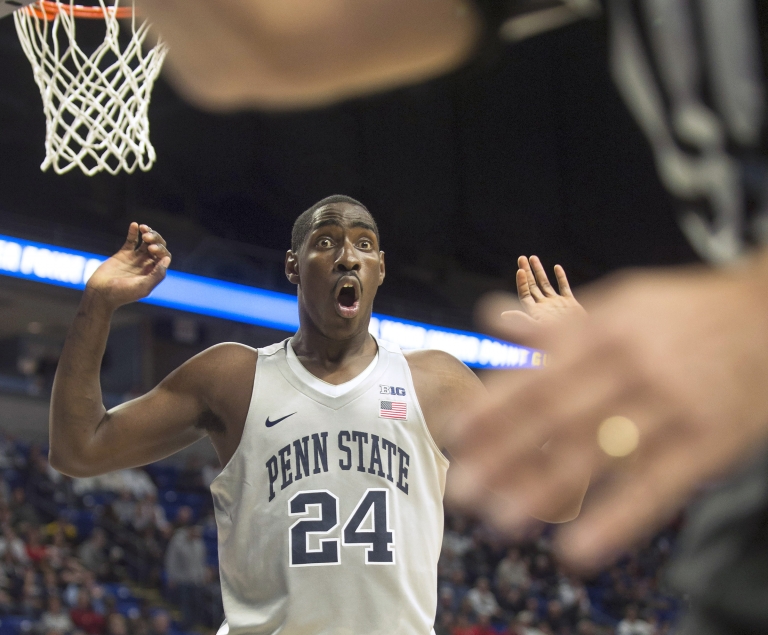 Penn State forward Mike Watkins (24) reacts to a call made during his team's game against Wisconsin at the Bryce Jordan Center on Monday, December 4, 2017. Wisconsin defeated Penn State 64-63. / Photo by Caitlin Lee 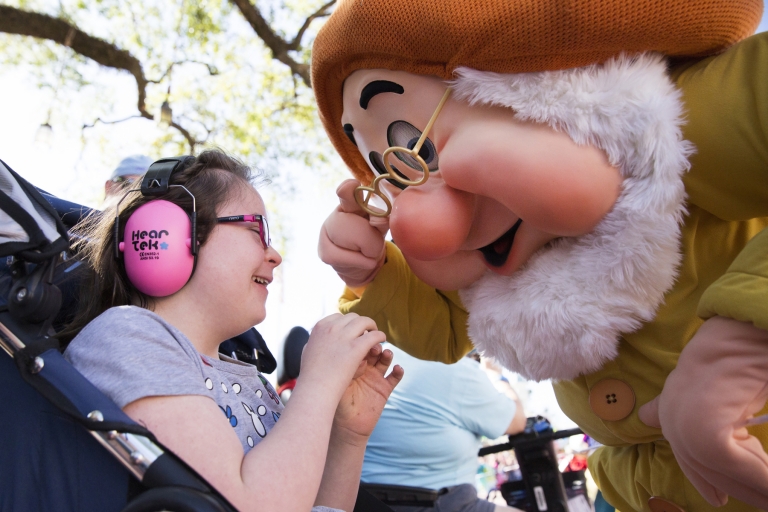 Emma Miller, 11, of State College Pa, is greeted by Doc, a character from the movie Snow White, during the Festival of Fantasy parade at Walt Disney World in Orlando. / Photo by Georgianna DeCarmine 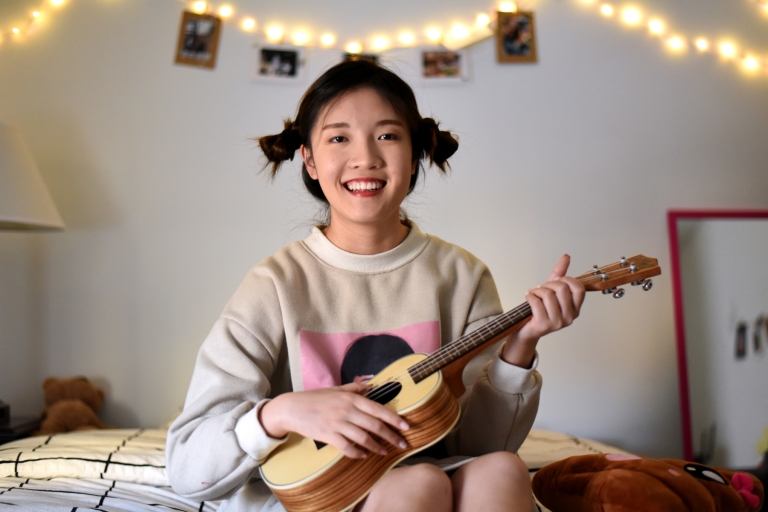 Yunqi Yang, a sophomore at Penn State, plays the ukulele in her room in State College, Pa. / Photo by Baidi Wang 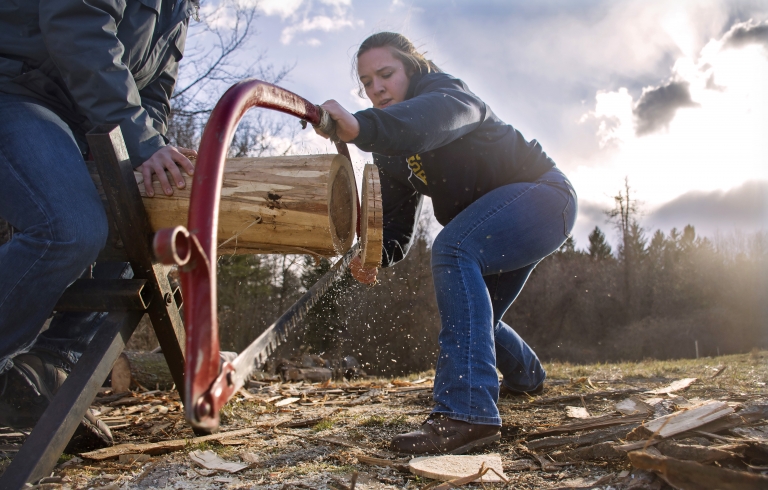 Maddie Bentz, a freshman at Penn State majoring in agriculture and extension education, and a member of Penn State's Lumberjacks and Lumberjills team, uses a crosscut saw during a team practice in the Penn State Spray Fields on Tuesday, April 3, 2018. / Photo by Caitlin Lee 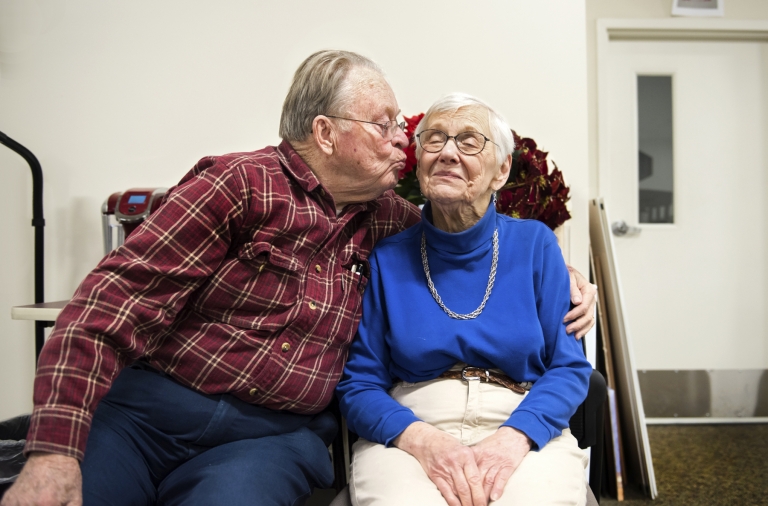 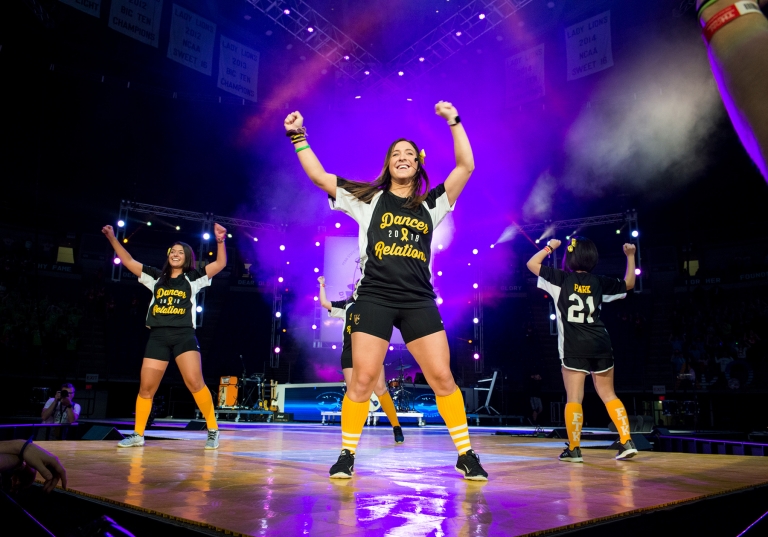 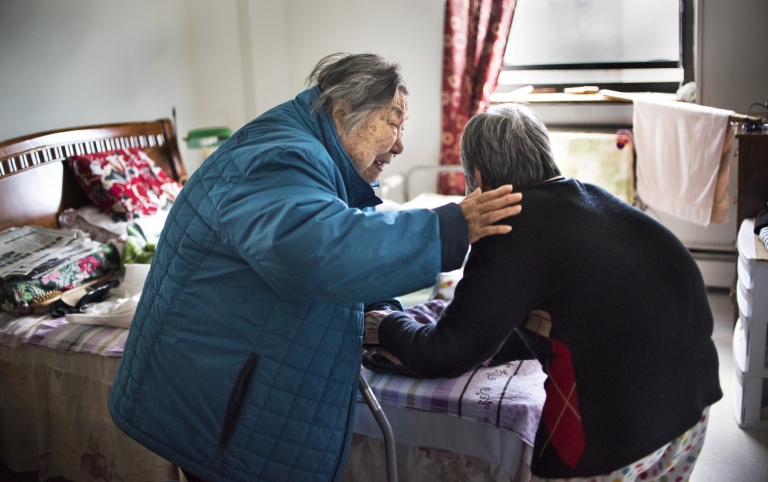 Qinhua Di, right, greets her friend, Meiying Dong in her apartment in the Allen Community Senior Center in Jamaica, NY. Due to health problems, the friends had not seen each other for a year. / Photo by Anqi Wang 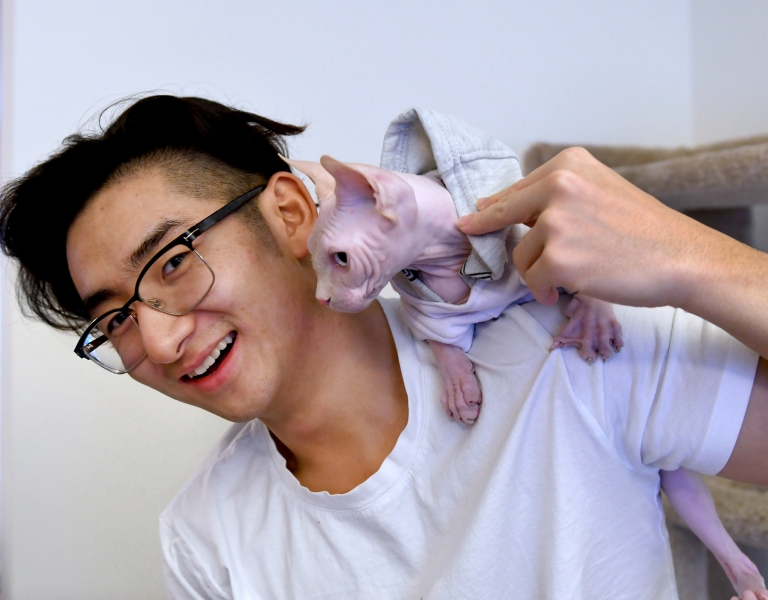 Wenchang Yang, a junior at Penn State majoring in nutrition, poses with his cat, a Sphinx breed, at his apartment at Oak Hill in State College, Pa. The Sphinx breeds have no fur. / Photo by Jiay Lu 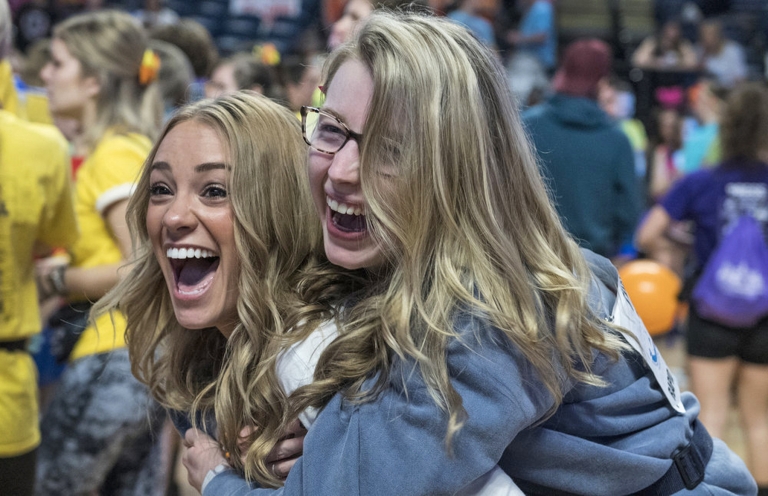 THON dancer, Daniella DeLaCruz of the Penn State Lion Ambassadors, right, jumps on the back of THON dancer Holly Andre at THON 2018. / Photo by Lexi Lehman 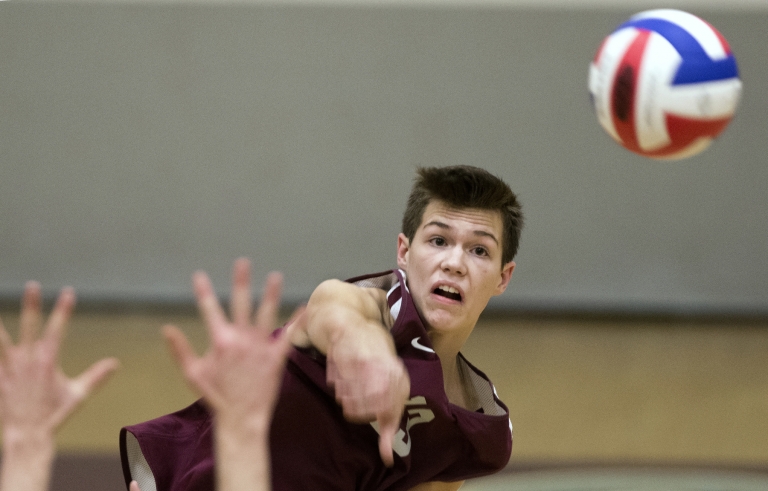 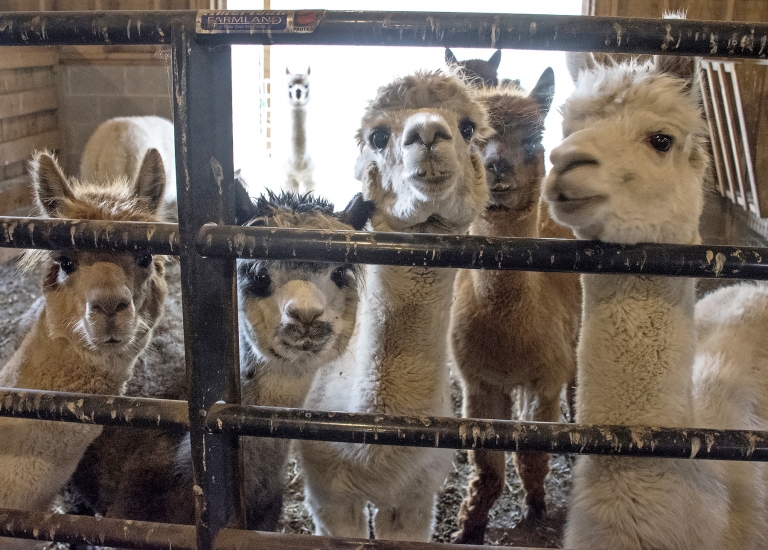 Alpacas keep a watchful eye on visitors at Bald Eagle Valley Alpaca Ranch in Julian, Pa. Each May, the alpacas are sheared for their fiber that is spun into yarn. / Photo by Lexi Lehman 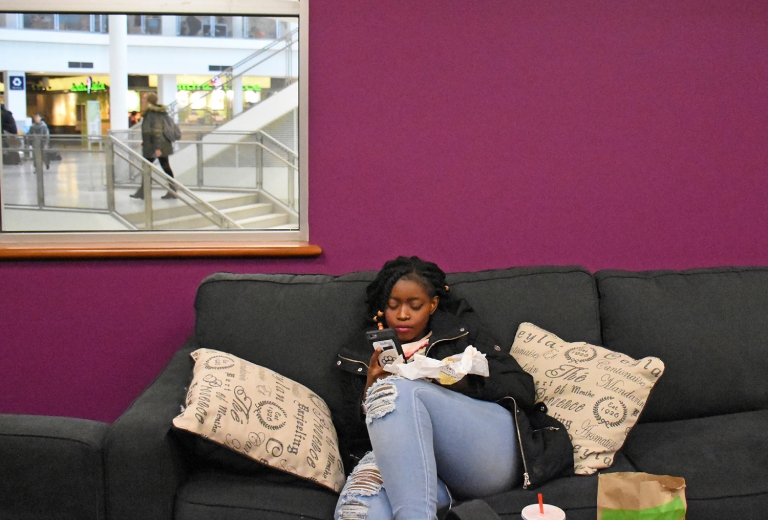 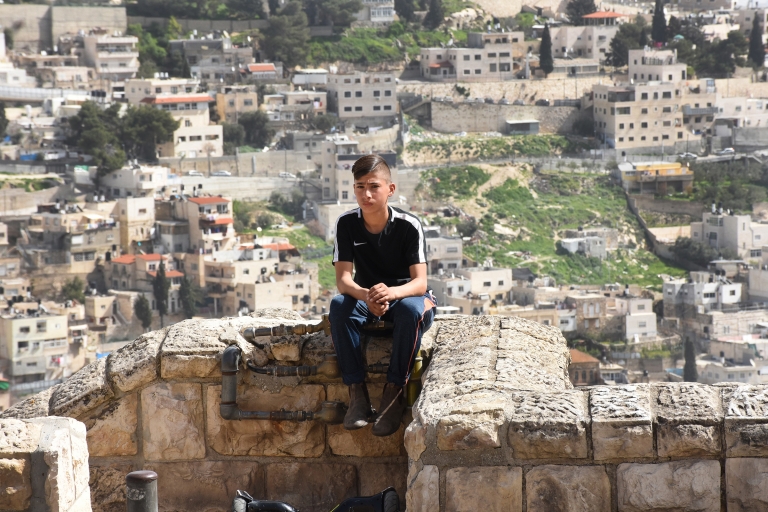 A boy sits on a wall outside the Old City in Jerusalem. The boy was looking out on the city below before he noticed the tourists walking by. / Photo by Giana Han 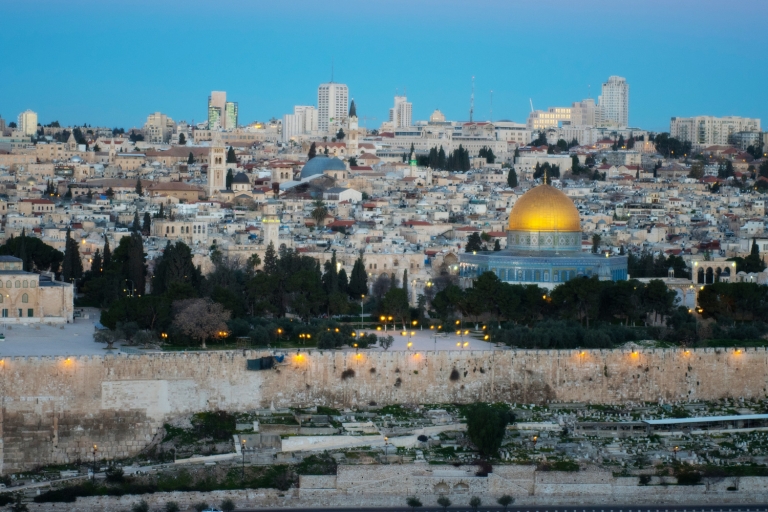 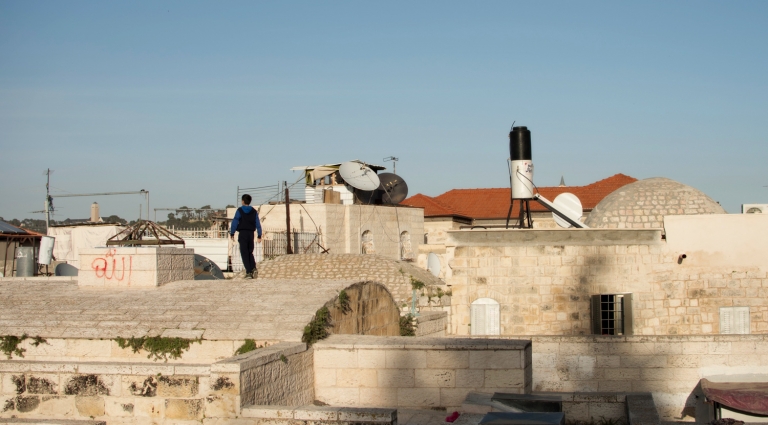 A Palestinian boy stands a the rooftop over David Street in the Old City of Jerusalem. The street below is the busiest in all of the Old City. / Photo by Kat Procyk 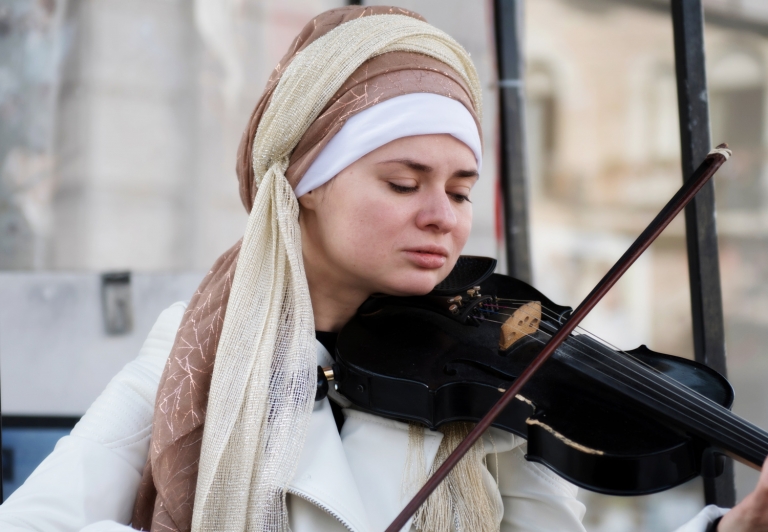 Alexandra Kanarit, originally from the Ukraine, plays her violin for a small crowd at the Zion Square in Jerusalem. Kanarit fell in love with music in the kindergarten and has been playing the violin for 25 years. " [the violin] like part of my body." / Photo by Kat Procyk 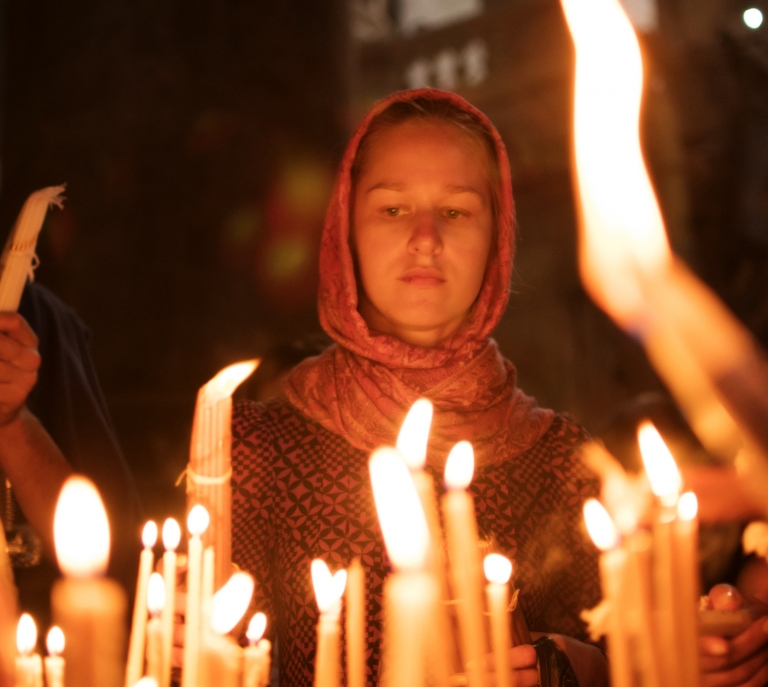 Anna Guschina, of Russia, lights a candle at the Church of the Holy Sepulchre in the Old City of Jerusalem. Guschina lit the candle to bring goodness to her life. “[It] means that God forgives us.” / Photo by Kat Procyk