Singing Together Through Alzheimer’s

Video posted April 27, 2015 in Best of CommMedia by Alexa Lewis.


PHILADELPHIA — Emilia Sfedu has lost what so many take for granted — her memory.

About six years ago when she was diagnosed with Alzheimer’s disease — a degenerative chronic form of dementia that ultimately results in death — she, like many others, clung to her last bit of independence.

After arguing profusely, she agreed to move in with her son, George Sfedu, his wife, Susan Satkowski, and granddaughter, Larissa Sfedu. 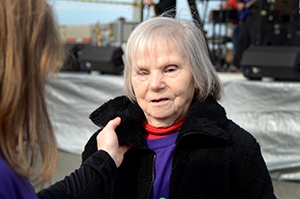 Larissa Sfedu, left, helps Emilia Sfedu to close her jacket after temperatures begin to drop toward the end of the annual Walk to End Alzheimer's walk in Philadelphia on Nov. 9. The walk raises both awareness and funds for Alzheimer's.

Since then, Emilia, 86, — a slender, frail woman with silver hair — relies on her family for everything from getting dressed to using the bathroom.

Alzheimer’s is the sixth leading cause of death in the U.S. It is also the only one of the top 10 causes of death that cannot be prevented, cured or slowed, according to the Alzheimer’s Association.

It is a disease afflicting about 5.3 million Americans in 2015, according to the association.

The progress of the disease  was startling, said Larissa, who grew close with her grandmother while she was homebound between college semesters after ACL surgery two years ago.

"My dad found a video of her from two years ago," Larissa said. "It's crazy the difference that two years has made."

She said her grandmother "saw the video, but I don’t think she even knew it was her."

Alzheimer's causes a slow decline in memory, thinking and reasoning skills that can start with having trouble remembering names and misplacing objects, according to the Alzheimer’s Association. A few years down the road, the patient’s symptoms can manifest into requiring full-time care and losing awareness of recent experiences and surroundings.

Now Emilia struggles to speak Romanian coherently. She has completely forgotten how to speak English, her second language.

Neither Larissa nor Susan speak Romanian, but George does. The women said it is challenging when George, who is the honorary consul of Romania, travels overseas for business.

More than half of primary caregivers of people with dementia, including Alzheimer's, are adult children taking care of parents, according to the Alzheimer's Association.

Emilia's family feeds her, medicates her, changes her diapers and puts her to bed. They have to keep both the house doors locked so that Emilia does not wander away.

"She’ll wrap her belongings in clothing and tell us she is going home," Larissa said. "But she wouldn’t know where she was going, she would just go."

In August of 2013, Emilia vanished for a few evening hours. The family said they were paralized with fear and involved the police in their search for Emilia. Hours later, George said that he found his mother on the roof of the family's five-story town home. She had climbed the fire escape.

According to the Alzheimer’s Association, the impacts of the disease weigh down caretakers. Nearly 60 percent rate their emotional stress as high or very high, and about 40 percent say they suffer from depression.

George is often busy traveling, and hosting benefits and other parties at his house in Philadelphia. Susan, a lawyer, spends much of the day at her office. And Larissa has a full-time job at a startup food company a couple miles north of the house. The entire family pitches in with feeding and caring for Emilia; however, most of the emotion support falls on Larissa.

“I do what normal 22-year-olds do, I go out with friends and have a social life,” Larissa said. “There have been times where I’ve been late to work or had to stay in to take care of her.”

Larissa does not sugarcoat the demands of caring for her grandmother every day and the contradictory emotions that rattle the family as they struggle to deal with a loved one who has lost the sense of her identity. But fighting back tears, she said, “I don’t want her to die.”

Alone but not forgotten

Emilia Sfedu often wants to leave the house, but that isn't allowed. She would get lost, said her granddaughter, Larissa Sfedu.

A rare exception was the 2014 Walk for Alzheimer's, which created the opportunity for Larissa and her parents to take Emilia outside for the first time in many weeks.

These photos show the walk, and life, from Emilia's perspective — living in a home where she doesn't remember the other people with whom she lives.

Emilia Sfedu died of Alzheimer's related complications on June 12, 2015. Larissa Sfedu continues to live at her parents' house in Philadelphia.

I am a senior majoring in Journalism (digital and print option). I am currently a state reporter at The Daily Collegian and an intern for The Centre County Gazette and AccuWeather.