Video posted December 8, 2014 in Best of CommMedia by Greg Surine.

Sean Sweeney is a typical Penn State senior. He goes to class, joins clubs and maintains a social life. Like other students, he also worries about what he’ll do for a career upon graduation.

Sweeney thought that getting an internship related to his major would increase his chances of obtaining a full-time job offer in the future. So last spring at Fall Career Days at the Bryce Jordan Center Sweeney wore a suit and tie, printed 20 copies of his resume and spent hours with recruiters on the floor and at interviews.

Sweeney felt particularly good about his interview with Kimberly Clark. With a smile and a handshake, the recruiter told him to submit a copy of his transcript immediately, because they were making job offers that day. Sweeney rushed home to send his transcript to the company, but he was worried his 2.8 GPA would make the company lose interest. Sweeney got a call from the company two weeks later stating they had offered the position to another student. Sweeney was left without an internship for the summer of 2014.

While reading The Odyssey, a Greek Life newspaper that gets delivered to his fraternity house, Sweeney saw another opportunity in the classifieds. Mac Frederick, owner of the iCracked mobile phone repair franchise in State College, was selling his business.

Sweeney had prior entrepreneurial experience from his time with Collegiate Concepts, where he was an independent contractor specializing in dorm room bed lofting. However, this experience would take up much more time and financial risk.

Like the internships he failed to secure, he had to produce a resume and cover letter to be considered as the next franchise owner of State College iCracked. He spent three weeks shadowing repairs, marketing and serving customers with no compensation. Because of his superior effort, Sweeney beat out 12 other students seeking the position. 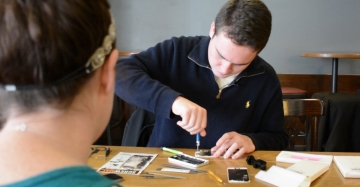 “He saw how badly I wanted it,” Sweeney said.  “I followed up with him more than any other job I have ever pursued.”

While he originally sought a summertime gig, he now has a job he can operate throughout the school year. During a typical week, Sweeney repairs up to 20 mobile devices while being active in his fraternity and taking 15 credits in industrial engineering.

His favorite thing about the job is that it allows him to meet a variety of students at Penn State. He also develops relationships with repeat customers. He has fixed a phone for a member of the Penn State women's rugby team six times now.

"I see her all over State College and it's just, 'Hey! It's not broken yet, but it will be soon!' kind of conversations," said Sweeney. "I've signed her cast a bunch of times, which is something I never thought I would get to do after the fourth grade."

The nature of being a one-man service business for college students does have its downsides. Business phone calls go directly to his cell phone, so customers have awakened him as early as 5 a.m. with repair requests. Sweeney tries to always sound professional.

“One time I stubbed my toe while I was on the phone with someone, and I had to keep a calm voice,” Sweeney said.

Nonetheless, Sweeney says he is pleased to serve his fellow students.

“It gives me a purpose. I’m the iCracked guy,” Sweeney said. “If you break your phone, you talk to me.”

Sweeney said he will continue fixing broken phones as long as he has the time, but he does not anticipate making a career out of it. He plans to use his experience with iCracked to show future employers he can handle a challenge.

“Besides the monetary gain, it has developed me into a more qualified potential employee than anyone who’s had an internship,” Sweeney said. “My success is totally dependent on my own effort.”

Sweeney was invited to speak at a Penn State's Global Entrepreneurship Week with a panel of other student entrepreneurs.

Greg Surine is a Pennsylvania native from Montgomery County. He career goals include working in the entertainment industry with a focus in talk radio and podcasting.

He will graduate from Penn State University in May 2015 with a degree in Broadcast Journalism. Greg has completed internships with CONAN in Burbank, CA; SiriusXM Radio in New York, NY; and B94.5 Radio in State College, PA.

During his college career, Greg has been the host of Radio Free Penn State: a panel-style talk show where students discuss current events and issues.