Video posted December 5, 2016 in Best of CommMedia by Shuyao Chen.


"Nobody knows about this place. Every time I say where I live or I'm going back to PERC, people always ask, 'what's that?'" Kristopher Smith said. Kris is a senior vet and biomedical sciences major with a poultry and aviary sciences minor at Penn State. 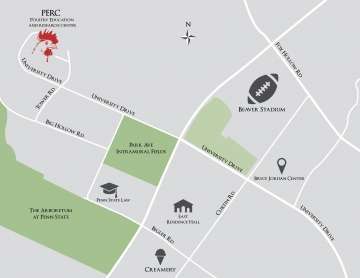 PERC stands for the Poultry Education and Research Center, which is located right across from Jeffery Field "in the middle of nowhere" at the northwest corner of Penn State's University Park campus. PERC is not the only experimental farm that offers such great opportunity for students.

There are seven agriculture facilities at Penn State where students work and live, including a dairy farm, meat lab, and horse barn. Students can work in any of the facilities generally for five to ten hours every week and if they go over that time then they get paid. On a regular workday, Smith usually gets up at 6:45 a.m. and collects fresh-laid eggs at 7 a.m. After he puts all the eggs in a giant walk-in fridge, he proceeds to feed the chickens and turkeys.

"Full-grown turkeys don't smell so good," Kris said. "I take a shower every time I get off work. Nobody likes to sit behind someone who smells like turkey poops in class."

At PERC, Smith is paid for his work with a free room, free laundry and free food. "We get free eggs and chicken here once a while, which is the real perks of this job," Smith said. "I will basically do anything for free food."

"I like spending time with animals," Smith said. "They don't judge what clothes you put on or what shoes you wear."

Smith also works at the dairy farm. "I like cows more than chickens," he said. "Furrier and more huggable."

He started working at the dairy farm since last summer and it was "one of the most pleasant experiences" that he has had. Although Smith doesn’t have any previous poultry experience before, he still applied for the job at PERC. Aspiring to be a vet in the future, he considers working there as a great learning opportunity. Growing up with both his parents as vets, Smith always had animals in his house. He used to spend a lot of hours in his mother's animal hospital. However, when he first mentioned to his mom that he was going to work and live at PERC, she was still surprised to discover that animals can be anywhere near her son’s career choice.

Having lived in the downtown for two years after he moved out of his freshman dorm, Smith said he likes living close to the birds, even if it means occasionally being pecked at by the chickens and escorting escaped turkeys back to their cages. The Poultry Education and Research Center is about 10-minute walk to campus. "Really, it's in the middle of nowhere," Kris Smith said. Photo by Shuyao Chen
Tweet