Story/Video posted April 26, 2021 in Best of CommMedia by Xiaohua Li.


It's not a huge industry.

In 1980, the United States Bureau of Labor Statistics found the number of blacksmiths in the U.S. had dwindled to 11,000, and it stopped counting.

Smithies are seen less due to the greater use of machines in forge shops that produce metal articles previously handmade by blacksmiths.

In State College a young sculptor is bucking this trend by creating a wealth of fine metalwork items including Timberland boots and baseball hats. 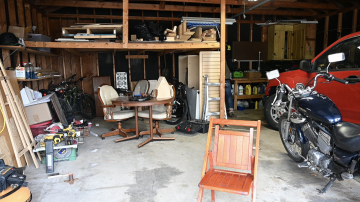 Haven Tucker recently graduated with a Bachelor of Fine Arts in sculpture from Penn State University. He has been working and making art in the State College area since then.

Tucker began learning to be a blacksmith before obtaining his  degree, which focuses on welding and other metalwork, particularly foundry and casting, in Penn State's School of Visual Arts.

Working in a forge means dealing with high temperatures. In a furnace that can reach 2300 degrees Fahrenheit, Tucker has melted and cast aluminum, bronze, and iron.

He says you can never be too careful.

"I was chiseling a piece of hot iron and usually wore a glove," Tucker said, "but I was in a hurry, and I was tired, and I hadn't put the gloves on. So I slipped, and my hand went right down and touched a piece of yellow hot steel."

It burnt Tucker badly enough that he couldn't feel the burn. He said he immediately put his hand in a bucket of water for 20 minutes. When he took his hand out, the burnt area had turned black.

"And I stopped foraging," Tucker said, "for the rest of the day."

Luckily, the burn healed pretty well, and it's not giving Tucker any lasting damage.

"So that's a little lucky, I guess. No one knows how burnt you really are," Tucker said.

Blacksmithing requires an artistic sensibility and good hand-eye coordination. Tucker said his physical and material adeptness comes from past training as a Junior Olympic fencer. 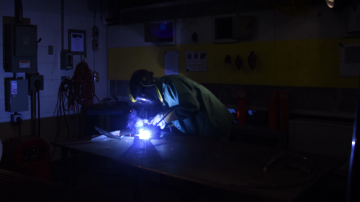 Haven Tucker works on a sculpture using arc welding for an outdoor exhibition in the welding room at Penn State’s Visual Arts Building in 2018. Photo by Julie Hunter

"I think that through the process of that sort of athletics, I built a system through which I was able to respond physically," Tucker said.

He said shaping metal is only part of the artistic process. The finish provides more artistic options — whether polished like a mirror, worked to a green patina, gun blued, or hit with a permanent sealer.

Depending on the surface treatment, "metal begins to have really interesting interplay between contextual notions of what we see metal used for, "Tucker said, "so rusty metal often has the potential to be viewed as decaying or degradation."

Tucker has been restoring tools recently to build up his shop facilities, "I've been welding as a restorative as opposed to a creative endeavor," Tucker said, "it's a totally different type of skill to learn — welding rocker panels or panels on cars takes a very different type of ability than welding a quarter-inch rod stock for an art project."

Tucker said artistic success, for him, is obtaining the space and time to create and make things.

"Having the facilities, having space, and having the means through which I can fabricate and create without feeling like that is jeopardizing or taking away from other aspects of my life," Tucker said.

"Feeling like I have to cut out of work early or I have to do other things just to be able to get into the studio is in some ways unsuccessful," he said.

Tucker says welding definitely comes in handy — “to get my truck back on the road.”

As a student journalist, my passion for writing and curiosity about the world around me has been the foundation for my journalistic work. Academically, I put everything I have into each piece I work on, and - whether it be mathematical, artistic, or journalistic - I give it my all. Previously, I had internships in various positions in both the television and newspaper industries. I am interested in pursuing a career in media, law, and politics.