DUBLIN – By the time Penn State finished practicing for the first time in Ireland at University College Dublin late Wednesday, it had been seven hours since the team touched down on a flight that crossed the Atlantic Ocean overnight. 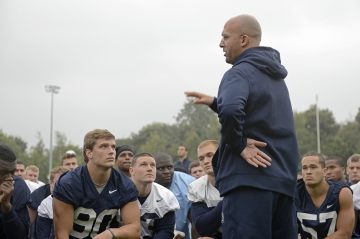 No one had been to the hotel yet. No one had slept much.

One would think Penn State would be experiencing fatigue. But when asked about his players being tired, coach James Franklin was adamant: “They’re not. They’re not.”

Instead, he was pleased with the team’s work on a rainy afternoon. Only dinner separated them from bed and the start of the new day.

“We did a normal Thursday practice for us,” Franklin said. “Tomorrow, we’ll do it again. I thought we got a lot out of it from a mental perspective.”

The overseas business trip that opens Penn State’s season really got rolling Wednesday morning when a traveling party of more than 300 touched down at Dublin Airport. The Nittany Lions play Central Florida on Saturday at venerable Croke Park. 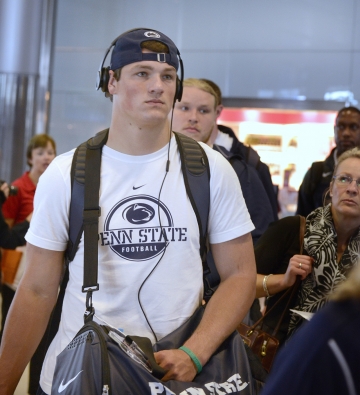 Franklin said most players slept on the plane – which is what the program wanted – but a few did not.

None of the seven players who spoke with the media after practice said they had trouble sleeping. Even 6-foot-7 tight end Jesse James said it was easy to fall asleep aboard the plane. And running back Zach Zwinak said the adjustment to a new country and a new time zone – Dublin is five hours ahead of State College – was coming along quickly.

“I definitely think me and a lot of the other guys kind of agree: We were tired, we want to sleep some,” Zwinak said. “I think as of right now, with practice and changing to the time, I think we kind of have the idea now.”

The Lions arrived in Ireland shortly after 11 a.m. local time to prepare for the program’s first international game. When the Croke Park Classic kicks off Saturday at 1:30 p.m. local time, it also will mark Franklin’s first game on Penn State’s sideline. 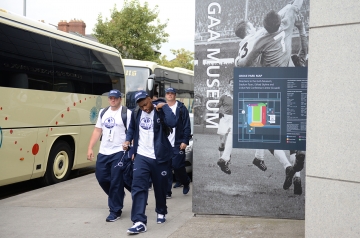 It’s not the first time Croke Park will host a college game, though. The historic venue also hosted the Shamrock Classic in 1996 between Notre Dame and Navy.

Penn State toured the historic venue and ate lunch there to kill time – and stay awake – before practice. The tour included lighter moments. Corner Jordan Lucas said he was one of a few players not to travel to the highest part of the stadium on a catwalk. Franklin joked he considered measuring the field’s dimensions since an American football field, which was lined Wednesday, was dwarfed inside the Gaelic pitch.

But to quarterback Christian Hackenberg, seeing the stadium in which some of Ireland’s greatest athletic games have been played was special. 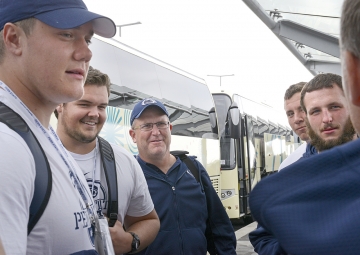 “I think it’s an awesome venue,” Hackenberg said. “Rarely do you get to play on some field that size. It means a lot to the people over here, so for us to be able to go and play in that, and them giving us the opportunity to play in that, it’s an honor.”

Thursday, things go back to normal. Franklin said that, after practicing at a walk-through pace Wednesday, Thursday will switch to full speed.

The head coach has not been shy about addressing the challenges an opener across the Atlantic Ocean presents, especially considering he and his staff are still breaking in at Penn State.

He said Wednesday that this being the first game can work in the Lions’ favor, though.

“What we try to do for players and staff really is we try to keep the routine as consistent as possible,” he said. “Flying to a different country makes it difficult to do that. I think it’s also probably helpful that this is our first game. They don’t necessarily know what the routine is like yet, so there’s some benefits to that.”


Coach James Franklin talks to reporters after the team's arrival at Dublin Airport.


The Nittany Lions are greeted by fans at Dublin Airport


(Greg Pickel is a student in the John Curley Center for Sports Journalism at Penn State.)