Fidel’s chef cooks for all now

Story posted January 5, 2015 in CommMedia in Cuba by Noelle Mateer.

HAVANA -- Tomas Erasmo Hernandez fought alongside Che Guevara in the Cuban Revolution. He personally witnessed two U.S.-backed assassination attempts against Fidel Castro. And he has cooked for over 100 heads of state as Castro’s chef for over 30 years.

Yet, he says, owning a private business is one of the hardest things he’s done.

“With the government, I was very comfortable,” says Hernandez, who is known throughout Havana as simply Erasmo. “When you have your own business and take care of yourself, it’s very hard.”

Tall and slender and with moving with an energy that belies his 71 years, Erasmo keeps the grinding hours of restaurateurs everywhere --  in at  10:30 a.m., out at 10 or 11 p.m. 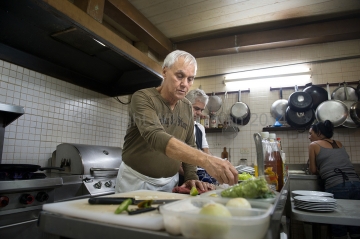 It’s a big turnaround from his previous life.

Working for Castro, Erasmo cooked for a generation of luminaries who came to witness Cuban communism’s supposed triumph over capitalism. Yet when he retired thirty years later, his nation rewarded him with a private business.

Today, Erasmo is the proud owner Mama Ines, one of a growing number of private restaurants called paladares.  His glory days are not forgotten, though: A photo of him alongside Fidel and the late Gabriel Garcia Marquez hangs prominently on one wall of the restaurant.

Here he is in his element, darting between the kitchen and dining room, greeting customers with a wide smile and barking orders at his wait staff.

Erasmo’s transformation from Marxist guerilla to successful private businessman says a lot about the ongoing transitions in Cuba itself.

In order to support tourism, the country’s largest and most important industry, Cuba is coming increasingly to rely on small business owners like Erasmo not only to serve food but to drive taxis, mix mojitos and sell the ubiquitous Che Guevara t-shirts.

”The future is of paladares,” said Erasmo of the ongoing boom of the private restaurant business in Havana.

Over the past five years, President Raúl Castro has expanded the rights of private business owners, called cuenta propistas, in Cuba.  As of 2013, one in five Cubans is a registered cuenta propista, but that’s an official number. Some researchers put the percentage much higher—even up to 40 percent when taking into consideration not only unregistered private business owners but also government employees working on the side to supplement their meager official income.

And that, after all, is what this is all about. Private businesses can create salaries unthinkable within the spectrum of government-operated jobs.

That’s because in Cuba’s dual-currency system, tourists and foreigners spend CUCs, or Cuban convertible pesos, which have a value drastically higher than that of the Cuban peso used by Cuban residents. In Cuba, having access to this preferred currency can spell the difference between a comfortable middle class life and the struggle to make ends meet.

But in order to land these jobs, prospective business owners need money to begin with—money the average Cuban typically doesn’t have.

“Most of this money comes from abroad,” said Sergio Mercenit, a writer whose son worked at Mama Ines, about fledgling Cuban enterprise. Many paladares, he says, were started by Cubans with ties to money in other countries.

“You can’t start a business without money,” said Juan Carlos, who works as a shift manager at Toke, a privately owned café complete with a flat-screen TV and fully stocked bar.

Toke is sleek and modern. But as a small café, some of its paladar competition dwarfs it. Originally, the government restricted paladares’ size and influence by limiting seating capacity to 12 and requiring owners to run them out of their own homes.

Today, things are different. At Doña Eutimia in Old Havana, for example, guests sit on antique cushioned chairs in a wood-paneled salon while the bartender mixes piña coladas behind a stained-glass partition. Nearby paladar Nao is cheaper, but more expansive—tables sprawl onto two floors and an outdoor patio.

La Guarida, arguably Havana’s most famous paladar, proudly displays photos of Jack Nicholson from his visit, and a polo-clad doorman stands outside to direct you inward. Workers from many other paladares pass out paper advertisements, often in English, in Old Havana and the Malecón, a popular walkway lining the city’s waterfront. 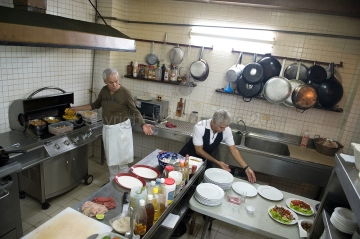 Paladares can range in price from $50-a-plate upscale dining to cheaper, more basic restaurants opened near hotels by business owners hoping to make a quick buck (or peso).

From the tourists, that is. Don’t expect to see too many Cubans eating in a paladar, or out at all, really.

Dinner and a drink at Mama Ines will run you about $20, an enormous chunk out of the average Cuban’s monthly wages.

It’s no surprise, then, that Erasmo serves mostly tourists. Carlos says Toke primarily caters to foreigners as well, and the language overheard most at Nao is English.

“I would like to have more Cuban clients, but they don’t have the money,” Erasmo said, adding that the ones who do visit usually have dollars from family in the U.S. or elsewhere.

Still, visit Mama Ines two nights in a row, and chances are Erasmo will recognize you with an enthusiastic “Hola!” and a kiss on the cheek.

Come early enough, and he’ll still be eating his own dinner: fried chicken on a paper plate at a table just a few feet away from his treasured photo of him with Castro and Garcia Marquez.

The décor is tasteful, but simple: a wine rack stocked with French and Italian wines, pastel walls and antique furniture from Erasmo’s own heritage.

Customers order off large food and wine menus, but some are content to have Erasmo choose what to serve them. The menu ranges from traditional Cuban fare—fried plantains, shredded pork, rice and beans—to more creative, upscale dishes like lobster and fried octopus.

The food is quite good, and the atmosphere charming, but Mama Ines remains relatively unknown. The restaurant, which opened less than two years ago, is on a quiet backstreet of Havana—close to the major San Francisco Plaza, but far enough away that tourists generally don’t wander down its cobblestone streets.

The result is a mostly quiet restaurant with lots of personal attention from the chef. When he isn’t barking orders in the kitchen, an apron tied over his t-shirt, he’s out smiling at his customers and, if they request, enthusiastically talking about Fidel.

“Fidel has an angel,” he said one mild March evening as he launched into a story about two U.S.-backed assassination attempts he witnessed. The C.I.A. failed to assassinate Fidel over 50 times. Erasmo shares the statistic proudly. “Fidel is so strong, nobody can kill him.”

Under Fidel, Erasmo cooked for countless heads of state, including former U.S. president Jimmy Carter. A lesson on Fidel over mojitos and bacas fritas is a cultural experience some tourists would die for. And yet tables at Mama Ines remain open even on Saturday nights.

It’s not like he can rent out advertising slots. In Cuba, billboards exist primarily to advance the party line. Signs reading “Thank you Che!” and “Everyone for the Revolution!” loom over highways. But could Cubans see billboards advertising private business soon?

Erasmo is still forced to buy all his food supplies at retail prices. He also runs up against the U.S. embargo: he buys the U.S. beef he wants from Mexico and Panama since he can’t buy it directly, but that’s not always reliable. Sometimes he just has to buy meat in Havana. He also mentioned wanting specific type of paint for the wall behind the photo of him with Fidel, but that’s only available from the U.S.

“We have started to become known,” he said.

And with that hope of future, likely foreign, customers visiting his private restaurant, Erasmo says that he and his dog Obama can seamlessly bridge the gap between old Cuba and new.