HAVANA – It’s 10 a.m. and cars are flashing down an eight-lane highway. A 1953 Chevrolet Bel Air roars down the street, followed closely by a 1955 DeSoto Firedome. Motorcycles, taxicabs, and buses soon join these American classics backed up at a stoplight, spewing exhaust.

Traffic jams are back in Havana – and after decades of fuel shortages, they’re regarded as a sign of progress for the island. 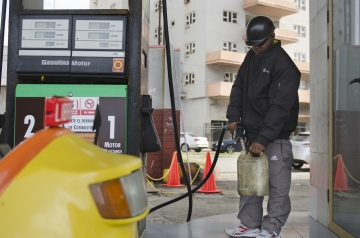 Twenty years ago, the end of economic aid from the former Soviet Union plunged Cuba into a period of hardship known as the Special Period. A cutoff of cheap Soviet oil led to an energy crisis. Traffic disappeared from the streets, power outages darkened Havana, and industry and agriculture were paralyzed. Shortages of food, medicine, and clothing were the norm.


“Cuba was in its hardest moment of history,” said Marcos Antonio Pestana Roque, a director of operations for Cuba’s state-owned oil company Cuba Petroleo, which is more commonly known as Cupet. “It wasn’t about going to battle or going to work. It was about survival.”
Memories of that energy crisis and the accompanying hardship have faded, as Cuba has sought to develop its domestic energy sources and diversify its economy. Indeed, progress has been made in Cuba, but the country still faces serious energy challenges today.


Since the fall of the Soviet Union in 1991, the government has encouraged foreign investment in the energy sector.


Pestana said companies from Canada, China, and Venezuela have invested and worked with Cupet in the exploration, production, and refining of Cuba’s petroleum products. Thanks to these efforts, Pestana said Cuba is now capable of producing 50 percent of the energy that the island consumes – a claim some outside experts find to be overly optimistic.


“We are working hard to increase our production to fulfill our necessity here in Cuba,” said Pestana. “Every year, we advance more and more and more.”


But Jorge Piñon, a former BP and Amoco executive and longtime Cuba energy expert now with the University of Texas, disputes the claim that Cuba can supply half its energy needs domestically. He said the real figure is closer to one-third, citing statistics from Cuba’s own National Office of Statistics (ONE) and Venezuela’s state-owned oil and natural gas company Petroleos de Venezuela SA (PDVSA).


Piñon said that Cuba consumes approximately 140,000 barrels per day of petroleum products. He said the island produces approximately 47,000 barrels per day of crude oil and has to import the rest. Power generation needs alone consume twice Cuba’s domestic production.
Cubans believe there is potential to increase its energy production via offshore drilling. Cupet officials estimate around 20 billion barrels of oil on the island’s northern coast. On the other hand, the United States Geological Survey (USGS) estimates there to be around 4.6 billion barrels of oil, which is still a significant supply.


“I believe our future is in the Gulf of Mexico,” said Pestana. “I believe that a discovery of an oil field in the Gulf will take 15 years for us to develop. But it would be a huge economic break for the country.”


However, the United States embargo against Cuba, which was implemented in the early 1960s, greatly restricts the Cuban government in energy exploration. Cuba is prohibited from contracting oil rigs with more than 10 percent of U.S. technology onboard, which makes offshore drilling difficult since most of the first generational technology is U.S. based. 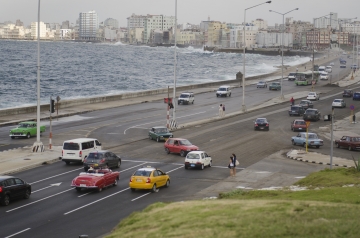 “This is an area where the embargo does work,” said Dr. Jonathan Benjamin-Alvarado, a political science professor at the University of Nebraska and leading researcher on Cuban energy issues since 1991. “It really limits the ability of the Cubans to adequately develop the technology and meet the environmental challenges that they have there. It also chills the environment for investment.”

Over the last few years, Piñon of the University of Texas said Cuba has drilled four or five exploratory wells offshore and all of them have turned up dry. He said at least four of those projects cost in the excess of $100 million each.


“That’s not a cheap exercise,” said Piñon. “If oil companies like Repsol (a Spanish oil company) spent that much money, it’s because their own data must have been very similar to the USGS data. They thought there was a high probability of oil.”


Dr. Ricardo Torres, an economics professor at the University of Havana, believes there is an opportunity for Cuba to decrease its dependency on fossil fuels and invest in sources of renewable energy.


“We need a more diversified sector, able to produce electricity out of sugar cane biomass, ethanol, and a few other products,” he said. “And we have an important potential in solar and wind energy.”


Many skeptics argue that Cuba doesn’t have the capital to invest in renewable energy. Yet the University of Nebraska’s Benjamin-Alvarado argues that the country has the know how to produce that technology on its own, as opposed to importing it or encouraging additional foreign investment.


“I’ve seen it with my own eyes and I’ve taken American power engineers down to Cuba,” he said. “We’ve gone to conferences and they’re convinced, given the right investment and the right kind of development environment, that the Cubans could become self-sufficient in these areas and they would be able to sell that technology to the rest of the region.”


Currently, renewables account for around 2 percent of Cuba’s energy production, said Piñon, who is uncertain about the idea of depending on those technologies for energy production.
“In electricity, you need a reliable base load that runs regardless of the weather, the sun, the wind, drought, etc.,” he said. “That base load happens to be fossil fuels, which is coal, oil, and or gas and nuclear. Like in every country, renewables in Cuba will play a role, but still the main challenge is that Cuba’s base load and electricity still has to come from gas or oil.”


Cuba’s energy vulnerability may be that it is once again dependent on a single source of foreign oil for the majority of that base load. Since the early 2000s, Cuba has been receiving oil imports from Venezuela in exchange for its doctors, dentists, sports trainers, security advisors, and other workers. Cuba relies on these imports for over half of its energy consumption.
And once again, this single source of oil is starting to look shaky.


Since early February, opposition demonstrators have taken to the streets in violent protest against Venezuelan President Nicolás Maduro’s government, which came to power via election in April 2013, following the death of former president Hugo Chávez.


Clashes between opposition and government forces have led to more than three dozen deaths, hundreds of injuries and thousands of arrests. Maduro claims there have even been coup attempts against his government, and three air force generals were arrested in connection with the plots.


Many fear the unrest in Venezuela could potentially impact its ability to serve Cuba with oil, meaning a potential return to Special Period like conditions on the island. Even the potential of that return reminds the Cuban people of the misery they endured in the early 1990s.
Pestana, a young professional at the time, remembers what it was like to live in a country with virtually no energy.


“There was electricity for one or two hours per day,” he said. “I used to sleep on the roof of my house because it was too hot inside.”


Torres recalls the bicycles that Cuba imported from China, approximately 1.2 million, to provide its people with adequate transportation. With little gasoline on the island, cars and buses were idled. Between a lack of food and an increased rate of exercise, many Cubans lost weight, said Torres.


“It was pretty rough sailing for the Cubans,” said Benjamin-Alvarado. “I like to say that it’s not until the early 1990s that Cuba finally becomes truly independent. They’re not dependent on Spain, not dependent on the United States, and not dependent on the Soviet Union. They had to rely entirely on the state for their existence. That became very difficult during that period of time.”


To pull itself out of the Special Period, Cuba implemented significant economic reforms, said Benjamin-Alvarado. Early on, the government introduced new incentives for people to grow their own food as well as new food distribution methods. Over time, Cuba reestablished itself as a tourist destination to encourage foreign income; it capitalized on its medical services as a valuable export and trade commodity; and in general, the government opened up key sectors of the economy for foreign investment.


“In all the economic evaluations, it really holds up that Cuba did a pretty remarkable job,” said Benjamin-Alvarado. “Many people thought that Fidel was never going to allow Cuba to evolve into even a quasi-capitalist type of economy. But that’s essentially what he had to do for survival.”


Regardless of the unrest in Venezuela, many experts don’t see Cuba having to fight for its survival again any time soon.


Dr. Bruce Bagley, a professor of international studies at the University of Miami and expert on Latin American politics, says he doesn’t foresee Venezuela cutting off its oil exports to Cuba.
“It would be counterproductive for the Maduro government because it could lose security,” he said. “It’s heavily dependent on the advice and the agents that Cuba provides for security to the regime. They’re not going to do that anytime soon.”


Pestana and Torres are confident in the island’s current position and optimistic concerning the country’s future.


“I don’t think there even is a big problem with Venezuela,” said Torres. “I don’t think that picture will repeat itself in the future because the degree of dependency is lesser from Venezuela compared to what it was from the Soviet Union. And again, Cuba’s economy is more diversified today so we have other anchors. It’s not as dramatic.”