HAVANA— Vivian Álvarez blends into the streetscape of Old Havana. She walks unnoticed by the people who pass her. But then she turns right, and right again, and suddenly she’s in her building.

Álvarez, a senior official involved in the restoration of Cuba’s capital, is nearly done restoring the former apartment complex. It had been overcrowded — multiple generations of families often share one living space in Cuba. At more than 300 years old, the building stood as an archetype for many of Old Havana’s decrepit facades. But it doesn’t look that way anymore. 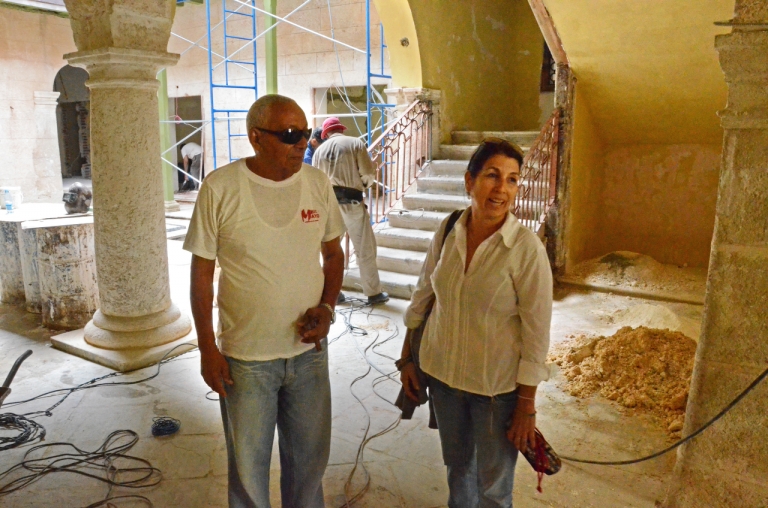 When Álvarez first assessed the La Casa de Arrango y Parreño in 2001, she didn’t see the cramped rooms, unstable structure and ramshackle ceiling that everyone else saw.

She saw a three-story office building, with a sun-filled courtyard and beautiful mural paintings on the wall. It would serve as the headquarters for the Office of Havana’s Historian (OHCH).

Álvarez is one of the top aides to Dr. Eusebio Leal, head of the OHCH, the city agency that offi-cially oversees Old Havana’s restoration. Leal has resurrected scores of buildings since the 1960s, which made him a celebrity in this city. Álvarez has restored 11 buildings since she first started working for the OHCH in 1986.

Álvarez said La Casa de Arrango y Parreño is her most challenging project yet, and the one that has put the most pressure on her. Her general responsibilities include coming up with ideas for buildings, and then drawing them. Ever since Álvarez was a child, she’s loved drawing things. Now she’s 52, and her depictions become reality.

Álvarez is the reason why places such as the Museum of Havana Club Rum, the House of Ce-ramic Art and Castle of Royal Force draw tourists from all over the world. Old Havana is the home of many historic sites now turned into attractions. Founded in 1519 as a Spanish colony, Havana served as the Caribbean’s main trading port through its war of independence at the end of the 19th century. The city still displays buildings that are centuries old and mostly untouched.

As recently as April 21, the Associated Press reported that the seventh floor of a building col-lapsed, leaving 120 families homeless. This is not an uncommon occurrence.

The deterioration of Havana’s structures has had Álvarez and Leal restoring buildings in bulk. Money is no issue for the Office of Havana’s Historian. Since 1994, the agency has been man-aging its own budget, independent from the state.

Álvarez started working in 1986.  She recalls one of her earliest projects on La Cabaña, an 18th century fortress built to fortify Havana’s coast during the Seven Years War between Spain and Great Britain. Álvarez would turn it into a historical park for the public, but her architect refused to take her seriously because of her gender.

“Of course, I had to learn how to talk to him,” she said through an interpreter. “The architect would sometimes tell me, 'My wife listens to me. Why don't you listen to me?' He was a man, he couldn't understand that a woman was the one with the most important role there.” 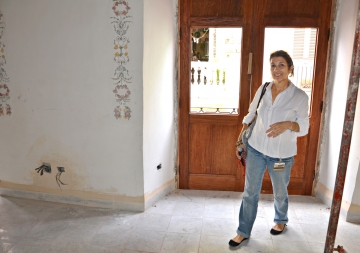 She greets one of the workers who has helped make La Casa de Arrango y Parreño possible. Álvarez lightly touches his arm as she receives an update on the renovations. His dirty white T-shirt contrasts her clean white blouse. She roams through the construction site without a hard hat, waving to the helmeted workers on each of the building’s floors.

As Álvarez’s role has evolved, so has Old Havana.

Now it is a magnet for tourists. Canadians, Europeans and South Americans fill the myriad cafes, bars and shops. The Cuban government has even allowed several of these local busi-nesses to privatize — still with several state restrictions, though.

The plazas of Old Havana have been cleared of debris and transformed into spacious public squares. Cubans and tourists alike can stand in the shadow of the Havana Cathedral’s gray pil-lars. They may sip a daiquiri at El Floridita bar, where Ernest Hemingway drank in the 1930s.

A rebuilt elementary school bustles with happy children. Grunts echo from a revamped gym. Even Havana’s National Capitol Building — constructed in the 1920s by a U.S. firm as a similar model to the Capitol in Washington D.C. — undergoes intense renovations.

Álvarez said the restoration efforts spiked in 1993, shortly after the U.S.S.R. collapsed and its subsidies to Cuba ended. At the height of The Special Period, when many families could hardly feed themselves, Old Havana’s revival thrived.

The strategy likely reflected the government’s belief that tourism would be the country’s salva-tion. All revenue generated by the restoration returns to the OHCH so it may continue its work on Old Havana.

Many Habaneros reap these benefits, but others wait. Irene Erahisy, who lives in this area of the city, enjoys going to the local theaters, many of which are recently restored.

However, she lives in an unrestored, 100-year old apartment complex with her daughter and 20 families. It’s overcrowded, and her room is small. But she has made the best of it.

“There are many people like me who live in Old Havana who have a small place but we can ar-range it so the room is clean,” Erahisy said. “There are buildings like this, maybe one day in the future will be renovated.”

It takes several years for Álvarez’s team to finish a single building. Some of the untouched ones still stand for their anachronistic charm, but their insides have long since been gutted and aban-doned. But these aren’t the most dangerous. Many derelict buildings still house too many peo-ple. Everyday, large families run in and out of structures supported in part by wooden beams. Their dank rooms have no doors. Even the streets can more closely resemble a canyon, with two thin sidewalks flanking both sides of a five-foot drop into rubble.

“It's not only a problem here in the restoration,” Álvarez said. “For example, this house they re-store it and this one they don't. If one building has to be restored, so does the inside, outside, electricity, water, everything.”

Residents forced out of Old Havana often retain jobs there. The city’s substandard public trans-portation requires them to commit several hours each day toward catching buses and walking.

For this reason, many Habaneros undertake renovations on their own. However, they must draw up a plan that must be approved by the state. If they attempt construction without permission, government agents can destroy their work.

“You can say from the 19th century, Old Havana became a place where people were living in the lowest level of society,” said Berta Robina, a tour guide and resident of Old Havana. “You can build, you can restore it, a building, in one year. The mind of the people, no.”

Old Havana holds different standings in different minds. Richard Mora, a 24-year-old Afro-Cuban, used to work at an elementary school there. Mora says that because of his skin color local entrepreneurs would try to prevent him for fraternizing with tourists. Mora now works out-side Old Havana, and he dates an American student studying in Cuba.

Mora has not returned to Old Havana, nor does he intend to. He said it doesn’t reflect the cul-ture of the rest of the city or the country.

This stigma lingers among Habaneros that Old Havana is nothing more than a tourism hub, separate from the rest of the city’s identity. But even the tourists cannot avoid many restored blocks that merge conspicuously with a crumbling section of apartments.

Álvarez has been working on Old Havana for more than 25 years now — Leal, much longer. They are restoring as fast as they can, but for some Habaneros living in Old Havana, the effects are only aesthetic.

Álvarez can only push forward, and she has no idea when she is going to stop. She said she believes in the importance of Old Havana’s restoration despite its fallouts. The construction is for the safety of Cubans. The tourism is for the prosperity of Cubans. These goals drive Álva-rez’s passion more than any want to leave her legacy on Havana’s skyline.

She comes across one of her finished projects on the side of a brick-laden street. She looks through the window of the Museum of Perfume and points out a spiral staircase. The building needed that staircase, she said, for better access. Her workers and architect complained that it could not be constructed, and Leal threatened to name the staircase after her if it ended up a failure. She insisted it could be done.

It proved perfectly stable. Álvarez admired it for a few seconds at the window, and she moved on. It never crossed her mind to go inside. There, she is not la jefe anymore.