PHILADELPHIA – John Baer has covered politics for more than three decades as a columnist for the Philadelphia Daily News.

He admits that he is not the biggest fan of the changes in the media landscape.
“Although it’s great that you can access information instantaneously,” Baer said, “no one is reading full stories anymore. People are getting their information from headlines and 140 character tweets.”

Up to 20,000 journalists are accredited to cover the DNC this week, and the media members include such old media stalwarts as the New York Times and the Chicago Tribune as well as 385 foreign news outlets 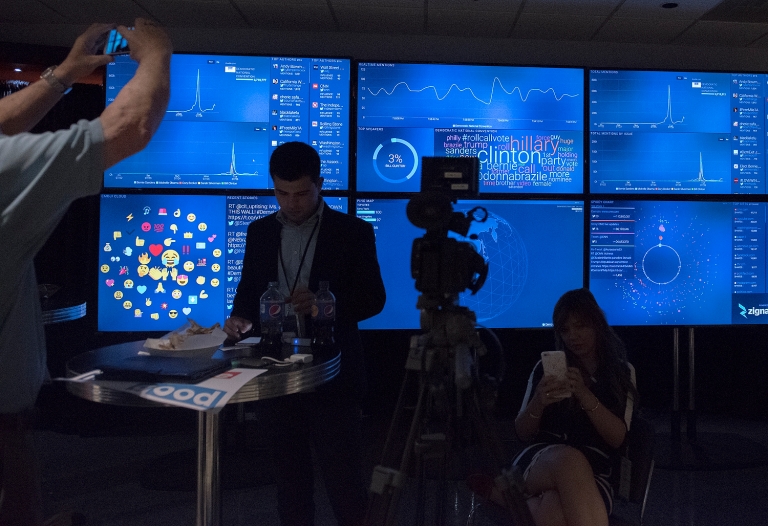 A display of real time ,live social media inside the Wells Fargo Center at the Democratic National Convention in Philadelphia on July 26, 2016 (photo by Gabrielle Mannino)

And everyone is housed together during the workday in huge, air-conditioned tents adjacent to the Wells Fargo Center, where the actual convention events are taking place.

These new media platforms, which continue to expand, have allowed the public to receive information rapidly.

“The positive effect is it allows a media feedback about how people are receiving political events,” he said. “The downside is that the people who engage on Twitter or on Facebook are generally unrepresentative. Most people don’t talk about politics in public forms.

The evolution of social media has opened new ways for people who choose to openly discuss politics, but it has also increased the amount of exposure society has to news.

Crystal Patterson is the government and politics outreach manager for Facebook. Patterson said that Facebook is able to connect with media outlets like FOX, CNN and MSNBC to help provide the world with easy news access.

“At Facebook our mission is to make the world more open and connected and that translates into politics and civic engagement as well,” she said. “It’s been easy for people to find information from the pages they follow and seeing other things that other people are talking about. I think it’s made people a lot more engaged and have a lot more conversations and hopefully learn more about the candidates.”

John Iadarola, YouTube host of ThinkTank and Young Turks, said that the changes have also opened windows of opportunity for candidates to connect with Americans and present their ideas to the public.

“I think that certainly for a lot of politicians that have had trouble presenting themselves as actual humans, it provides an opportunity,” he said. “It provides the opportunity for success or failure for politicians.”

Yet Baer said that while social media has some positive influences, he continues to fear that “social media moves blips of information without context, very rapidly, on stories that could change.”